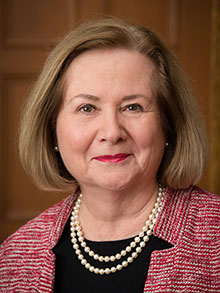 Judith Calvert has been the Registrar at Yale Law School since 2002, and Assistant Dean since 2011. Before coming to the Law School, she was Deputy Registrar and Director of Classroom Scheduling for Yale College and the Graduate School of Arts and Sciences. From 1986 until 1996, Calvert was an acquisitions editor at Yale University Press, where she was responsible for publications in foreign language textbooks and scholarly editions. She earned her Ph.D. in the History of Art from the University of California, Berkeley, with a specialization in the early medieval art of the British Isles. She has been a visiting lecturer at Yale University, Connecticut College, the University of Hartford, and Southern Connecticut State University. In 2012, Calvert was the recipient of the inaugural Vanguard Prize from the National Network of Law School Officers (NNLSO) in recognition of Outstanding Professional Achievement in Support of Student Services. She is currently serving her second term as the Executive Director of NNLSO, and she previously served as the Journal Editor of that association.