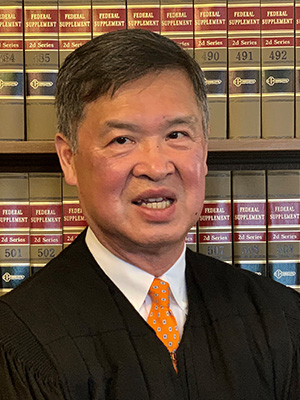 In the District Court, Judge Chin presided over a number of notable matters, including cases involving Megan's Law, the Million Youth March, the Naked Cowboy, and the Google Books project. He also presided over criminal trials involving the United Nations Oil for Food Program and an Afghan warlord charged with conspiring to import heroin, as well as the guilty plea and sentencing of financier Bernard L. Madoff.

In the Circuit Court, Judge Chin has authored opinions or dissents in cases involving the enforceability of arbitration clauses in online agreements, the General Motors bankruptcy, environmental regulations governing the discharge of ballast water from ships, the constitutionality of the government's seizure and retention of computer hard drives, barriers to access for voters with disabilities, and the streaming of copyrighted television broadcasts over the Internet.

Judge Chin and his wife Kathy Hirata Chin have been the principal authors of a number of scripts of reenactments of historic cases, including “Fred Korematsu and His Fight for Justice,” “This Land Is Our Land: Oyama v. California,” “Constance Baker Motley, James Meredith, and the University of Mississippi,” “Justice Denied: Wards Cove v. Atonio,” “The Heart Mountain Draft Resisters: Conscience, Loyalty, and the Constitution,” and “22 Lewd Chinese Women: Chy Lung v. Freeman.” These programs have been presented all around the country, including at numerous law schools and universities.