Recent events have brought to the fore longstanding concerns about the nature of policing in the United States and how it undermines racial equity. As an institution, policing needs significant reconsideration. It is time to rethink the structure and governance of policing. It is also time to engage in a deeper conversation about the meaning of public safety. In the meantime, however, the following is a list of urgently-needed reforms, compiled by a small group of law school faculty, each of whom runs or is associated with an academic center devoted to policing and the criminal justice system. The reforms are not intended as an entire agenda for what ought to happen around policing, or what American policing should look like. Rather, they offer immediate, concrete steps federal, state, and local governments can take to address enduring problems in policing. The authors are scholars who are also deeply involved in the daily practice of policing, and included among them are the Reporters for the American Law Institute’s Principles of the Law: Policing, which works with advisers from across the ideological spectrum in drafting high-level principles to govern policing. 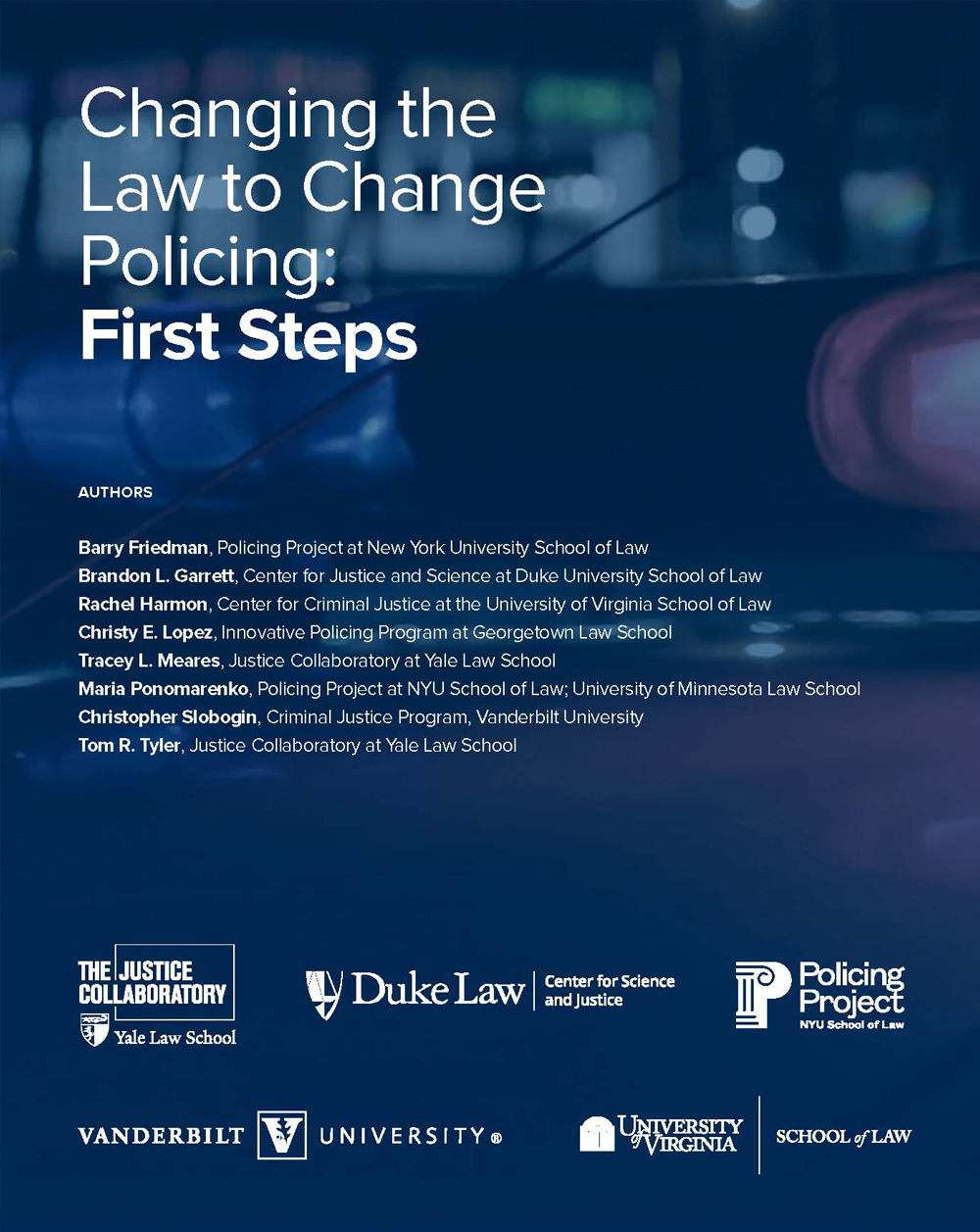 The following scholars contributed to the recommendations:

Re-Imagining Public Safety: Prevent Harm and Lead with the Truth

The Justice Collaboratory at Yale Law School and the Center for Policing Equity have released a five-step policy action plan highlighting the critical next steps to advance policing in America.

Titled “Re-Imagining Public Safety: Prevent Harm and Lead with the Truth” the recommendations advocate for enhancing law enforcement legitimacy and implementing models that promote assessing, maintaining, and fostering public trust. Collectively, these policies make every prior recommendation we have endorsed, easier, more likely, and more effective. In other words, these are the five steps that we believe can do the most work towards turning a just public safety system from a goal to a reality. 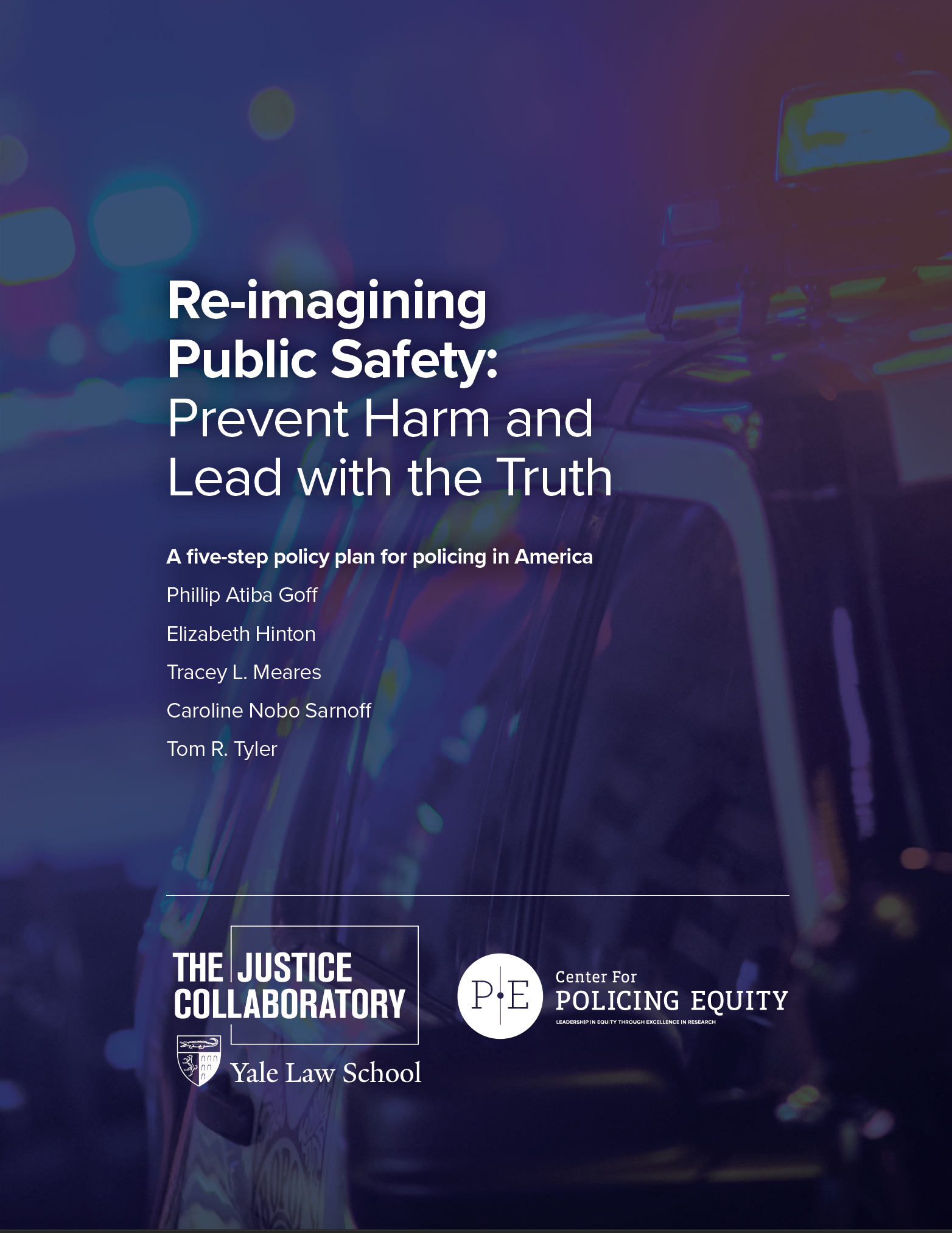 The work to which the Justice Collaboratory and the Center for Policing Equity have contributed collectively represents a near exhaustive list of best practices in reforming and re-imagining policing. Consequently, we recommend individuals review the following documents for a comprehensive list of national policing policy recommendations. We cite these documents throughout our current policy recommendations and have made them available below.

The National Initiative for Building Community Trust and Justice: Key Process and Outcome Evaluation Findings is the independent third-party validation of the DOJ-funded effort to create demonstration sites for what we know works to produce less burdensome and more equitable policing. The findings serve as initial evidence that a focus on procedural justice and the psychological roots of bias can change police behaviors in ways communities notice. The most important findings are that, during a period when the nation’s perception of racial bias in law enforcement increased, that perception decreased across the six cities that participated in the intervention. This was true even among Black residents in so-called “high-crime” neighborhoods, all while residents’ ratings of police legitimacy and neighborhood safety increased.

Principles of Procedurally Just Policing is a collection of model policies for public safety agencies that desire to create a more procedurally just organization—both internally and externally. These policies are the result of both careful study and experience as part of the National Initiative for Building Community Trust and Justice.

A Case Study in Hope documents the remarkable reduction in gun violence in Oakland and the ways in which a direct accounting for Oakland’s history of racially biased policing facilitated a watershed in community safety and made reconciliation between communities and law enforcement possible.