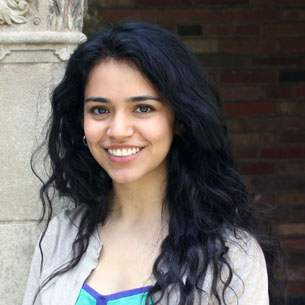 After nearly ten years immersing herself in public interest causes on the East Coast, Glenda M. Aldana Madrid moved to the Pacific Northwest to advocate for residents along the border where increased racial profiling has become a major problem.

“Nobody ever thinks about the northern border for border patrol issues,” said Aldana Madrid, “but there has actually been a massive increase in the number of reported instances of racial profiling and other really troublesome practices—it’s really eroding community trust.”

Aldana Madrid was awarded a one-year fellowship at the Northwest Immigrant Rights Project in Seattle through the Gruber Program for Global Justice and Women’s Rights at Yale Law School.

Born in Guatemala, Aldana Madrid and her family moved to Los Angeles when she was ten. With a strong interest in Latin America and international human rights, she began to explore law as a means to help others while studying at Harvard.

After graduating, Aldana Madrid worked for a young non-profit, the Human Rights Foundation in New York, where her interest in public interest law took hold. That interest quickly became a true passion in New Haven, as she engaged directly with the surrounding community and the courtroom.

“In clinics and in classes, I really had a chance to deepen my knowledge of how public interest law works,” said Aldana Madrid.

Aldana Madrid said she is committed to public interest and human rights work, but remains open to the many ways in which she can advocate for social justice in the future.

“I believe that there are multiple ways to do public service work, and I look forward to exploring those options as my career develops.”