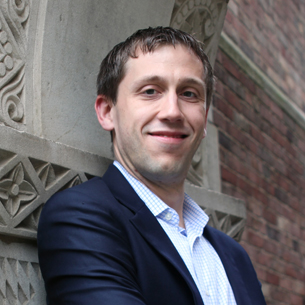 At the Intersection of Law and Business

Finding himself drawn toward two very different intellectual disciplines after graduating from Princeton University, Jim Williamson was faced with a decision—should he pursue business or law?

But after spending time working in both the private and public sectors, Williamson discovered he didn’t have to choose just one. Instead, he decided to explore the intricacies between both fields, enrolling in a specialized dual JD/MBA degree at the Yale Law School and the Yale School of Management.

“I always knew that I was interested in more of the big-picture type of analysis,” said Williamson, who worked as a McKinsey analyst and Policy Director for the Pennsylvania Treasury Department prior to coming to New Haven.

“I wanted to explore how systems work and fit together and the interplay between the private and the public sector.” Immersing himself in the diverse Yale community and drawing on the rich resources of the Yale Law School Center for the Study of Corporate Law, Williamson said he was encouraged to explore a wide range of approaches and theories that have sharpened his skill set and prepared him for his next step as a Credit Analyst for a New York City hedge fund.

And it’s that very sense of possibility—the chance to create something groundbreaking and new—that Williamson believes will fuel him throughout his career, wherever the next big idea may take him.

“Coming here drove home the fact that ideas actually do matter—we see this a lot in the law,” said Williamson. “Look at all the innovations in finance in the last thirty years. So many came about because of a new idea at the intersection of business and the law.”