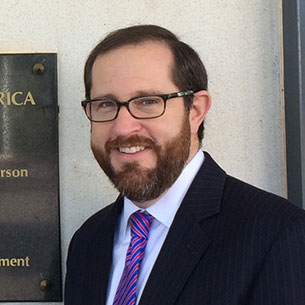 I’ve served as an Assistant U.S. Attorney in the Southern District of New York since 2007, working principally on terrorism and other national security cases (such as espionage, counter-proliferation, and counterintelligence). I graduated from YLS in 2004, and then clerked for two wonderful years — first on the Southern District of New York, then on the Second Circuit. I came straight to the U.S. Attorney’s Office from my second clerkship. Between clerkships, I worked for about a year at a twenty-odd-lawyer litigation firm in Manhattan called Lankler, Siffert and Wohl.

A brief aside: I had a terrific experience at Lankler, Siffert and Wohl. This firm, like a handful of other small litigation firms in New York, is comprised largely of former prosecutors. The firms are structured and oriented in a fundamentally different way than the larger firms, but are often involved in the same cases as those firms. As a result, the work, the people (and even the quality of life) were truly excellent. But this is no non-sequitur: working at a small firm like this one—where many of the partners had been AUSAs—significantly advanced my application to the U.S. Attorney’s Office.

My time at SDNY has been typically interesting, challenging and fun, but atypical in other respects. As with almost all AUSAs in SDNY, I started in the General Crimes Unit. There, AUSAs are exposed to a broad range of cases, from immigration to housing fraud to violent crime. The caseload is heavy. And the learning curve was steep — at least it was for me. I conducted two jury trials during my general crimes year. Most SDNY AUSAs spend the next year in the Narcotics Unit; I spent only about six months there, trying one jury trial before transitioning full time to terrorism prosecution.

In March 2009, I took a temporary assignment in Washington D.C. to serve on the Guantanamo Review Task Force. The task force was charged with reviewing the then-241 detainees still held at the detention facility in Guantanamo Bay, Cuba. My role, along with about a dozen other federal prosecutors from around the country, was to assess which Guantanamo detainees could be feasibly prosecuted in an Article III court.

In June 2009, Ahmed Khalfan Ghailani became the first — and, to date, only — Guantanamo detainee to be transferred from Guantanamo Bay for prosecution in federal court. I returned to SDNY to prosecute the Ghailani case. Ghailani was charged for his role in al Qaeda’s August 1998 attacks against the U.S. Embassies in Kenya and Tanzania that killed 224 people and injured thousands more. After his 2004 capture in Pakistan, Ghailani was held in a CIA black site — during which time he was subject to so-called “enhanced interrogation techniques” — before being transferred to Guantanamo Bay in 2006. For more than a year, we prepared for trial; I spent months traveling across the world with our truly extraordinary FBI case agents, including to Guantanamo Bay, Mombasa and Nairobi, Kenya, and Dar es Salaam, Tanzania. I met with dozens of the victims and their families. We briefed and argued multiple dispositive and complex pre-trial motions, including ones based on alleged violations of the speedy trial clause and of outrageous government conduct. After a five-week trial, the jury convicted Ghailani of one count (which carried a life sentence) but acquitted him of 284. Nevertheless, I cannot imagine that I will ever prosecute another case in which I will be prouder to have played a role.

In May of 2012, I accepted another long-term assignment, as Special Counsel to FBI Director Robert Mueller, and served for about a year-and-a-half as his advisor on a wide variety of national security matters. After Director Mueller left, I served briefly as special counsel to Director James Comey, before returning to SDNY. Serving as the Directors’ Special Counsel was just as interesting as it sounds. And it was a personal honor to serve Directors Mueller and Comey.

Upon my return to SDNY, I was fortunate to help conduct two lengthy trials, in 2014 and 2015, of senior al Qaeda leaders: first as part of the team prosecuting Sulaiman Abu Ghaith, who was charged with a variety of crimes relating to his activities, in 2001 and 2002, as a senior leader of al Qaeda; and more recently, as part of the team prosecuting three defendants charged in connection with the 1998 Embassy Bombings: Adel Abdel Bary, Anas al-Libi, and Khalid al-Fawwaz. Each case was an extraordinary opportunity to work closely with some truly outstanding prosecutors and amazing investigators.  I am also prosecuting Ahmad Khan Rahimi, the individual charged in connection with the September 2016 bombings and attempted bombings in the Chelsea neighborhood of Manhattan and across New Jersey.

I feel privileged to work at the U.S. Attorney’s Office. The work has been extraordinary. In addition to working on fascinating cases, I’ve had the opportunity to develop real litigation, trial and appellate skills, and to hone those skills by working with some truly extraordinary investigators and lawyers — and great people.