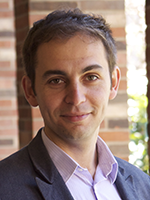 Roman Zinigrad is a J.S.D. candidate at Yale Law School, where he also earned his LL.M. degree. Roman spent the 2015-16 academic year as a Visiting Researcher at Sciences Po Law School in Paris under a Teaching Fellowship awarded to him by Sciences Po (Paris Institute of Political Studies). In addition to conducting his research, he is teaching courses in law and religion, comparative constitutional law, and the law of the European Union at Sciences Po College. Previously, Roman was awarded the Yale Fox International Fellowship, which allowed him to study the French legal and educational systems as part of his doctorate at Sciences Po Law School in 2014-15. Prior to coming to Yale, Roman served as a Law Clerk for Justice Salim Joubran at the Supreme Court of Israel. He has completed his LL.B. and M.A. in Philosophy degrees in Bar-Ilan University, where he also tutored Constitutional Law and Jurisprudence, served as an Associate Editor for the Bar-Ilan Law Studies Journal, and undertook legal research for professors in Constitutional and International Law.

Roman’s academic interests include constitutional law and political philosophy, multiculturalism, administrative law, religion, and Jewish law. In his J.S.D. dissertation on liberal-democratic education, he questions the liberal solutions to the triple tension between the right of children to develop autonomy, the State’s interest in civic education, and the parental right to resist both. He is developing his thesis using as test cases the educational systems in the United States, France, and Israel.