One Life at a Time 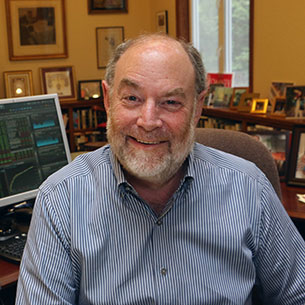 “I'm at a point in my life where I can't think of many better ways to change the world than one life at a time,” said David Nierenberg ’75 BA, ’78 JD. He and his wife, Patricia, gave the first ever gift to the Hurst Horizon Scholarship Program early in its development — a gift that is already having a major ripple effect.

For David and Patricia Nierenberg, that ripple effect is far more important than wealth or property.

“I make the gifts I'm making, as does my wife, out of gratitude for people who have done wonderful things for us in our lives,” said David. For him, that gratitude encompasses many people connected with Yale Law as well as the institution itself. He considers himself fortunate to have been influenced by Yale Law faculty like Ralph Winter Jr. ’60, Boris Bittker ’41, Robert Clark, and former Dean Guido Calabresi ’58, as well as talented and driven classmates from all walks of life (including William Eskridge ’78, now the John A. Garver Professor of Jurisprudence, who has done groundbreaking work on legal rights for sexual and gender minorities).

David Nierenberg started his career at the management consulting company Bain & Co. in 1978, a career in which he was championed and mentored by Mitt Romney. The two remain close to this day, and Nierenberg served as one of the national financial chairs for Romney’s 2012 presidential campaign. After leaving Bain in 1985, Nierenberg became a venture capitalist, a career that saw everything from public-private partnerships to a drawn-out but eventually victorious Supreme Court case. He is now founder and president of Nierenberg Investment Management Company and a noted philanthropist.

The Nierenbergs have served on the boards of dozens of organizations. They were named Philanthropists of the Year by the Community Foundation of Southwest Washington (where David served as board chair) and Nat Giustina Philanthropy Award winners by PeaceHealth Southwest Washington Medical Center, where they led a $53 million capital campaign and funded the creation of a new neonatal intensive care unit that has now helped more than 20,000 babies. The $15 million NICU gift honors David Nierenberg’s mother and her twin sister, who were born to immigrant parents 11 weeks early and survived thanks to excellent local medical care. “I, my siblings and cousins, and 15 children in the next generation all exist because of the miracle of their survival.”

David recently served on the board of Whitman College, where he co-led efforts to assist economically disadvantaged students. He saw firsthand the struggles of students who had to figure out financial aid on their own, refrain from participating in certain classes due to the extra expenditures required, or miss the joy of celebrating when their families couldn’t attend their graduations. Before the school intervened, “All of these micro-insults caused a great deal of unhappiness and stress,” he notes.

After that experience, “I was predisposed to be helpful when Dean Gerken told me about the Hurst Horizon Scholarship Program and asked for my involvement. For a person who comes without resources, the stress of getting into Yale Law School, staying in Yale Law School, and doing well can be tremendous. Heather and I were honestly reduced to tears by the importance of this program. This is what we should be doing, for these students who are seriously interested in pursuing careers in public service, to be able to do that without having to compromise the quality of their lives, both on campus and after graduation.

“And this fits beautifully with the leadership and the giving-back traditions of this law school. I'd like to think that what I'm doing is paying it forward for the benefit of future generations whose national service, stepping into the shoes of many other Yale Law School graduates over two centuries, can make the country and the world a better place.”