Focusing on the Fair Shake 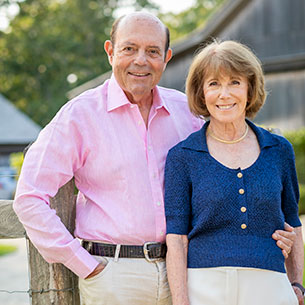 “The law itself is about giving everybody a fair shake. That is what a democratic society is all about,” said Gene Ludwig ’73. “If that is what we think we’re teaching at law school — that everyone should be treated equally before the law — we must treat students equally by making sure each one can get the finest legal education.”

“For me,” said Ludwig, “Yale Law School was an exceptional experience. It was the kind of environment that inspired you to contribute to society broadly.” Today, Gene and his wife Carol, a neurologist, are building on their longstanding generosity to Yale Law School by establishing The Carol and Gene Ludwig Family Foundation Horizon Scholarship Fund, part of the new Hurst Horizon Scholarship Program. Horizon Scholarships erase tuition for J.D. students with the greatest financial need. This gift follows others from the Ludwigs that are building an unmatched educational experience at Yale Law School, funding both the Ludwig Center for Community & Economic Development (CED), and the Carol and Gene Ludwig Program in Public Sector Leadership.

Gene, the founder of the Promontory family of companies and co-managing partner of Canapi Ventures, has long been focused on giving people a fair shake. He fondly remembers burning the midnight oil as editor of the Yale Law Journal and chair of Yale Legislative Services, which gave him the opportunity to actually write legislation rather than just read about it. His storied career has made him an internationally recognized leader on matters relating to banking, including financial technology, regulation, risk management, and fiscal policy. As U.S. Comptroller of the Currency from 1993 to 1998, Gene served as the Clinton administration’s point person on the policy response to the credit crunch of the early 1990s. Under his purview, lending to low- and moderate-income Americans increased tenfold, as did national bank investments in community development corporations. He brought 27 fair-lending cases, resulting in tens of millions of dollars in fines against violators. In 2019, he founded The Ludwig Institute for Shared Economic Prosperity (LISEP), which is dedicated to improving the economic well-being of middle- and lower-income Americans. Gene’s book, The Vanishing American Dream: A Frank Look at the Economic Realities Facing Middle- and Lower-Income Americans, shares insights garnered from a bipartisan group of the nation’s foremost economic thinkers.

“Opportunity for education shouldn’t be about how much money you have in your pocket. Merit, energy, and enthusiasm should drive access, otherwise you are denying your school the opportunity to have some of the most talented people.” —Gene Ludwig ’73

Carol is president of the Carol and Gene Ludwig Family Foundation (LFF), which supports medical research and educational opportunities for low- and moderate-income students. She also serves on the Board of KIPP-DC and on the Council of Medical Advisors for the Columbia University Irvine Medical Center where she is part of the Neurology Advisory and Medical Education Committees and the Precision Medicine Council. She was a Commissioned Officer in the U.S. Public Health Service and has worked at the National Institutes of Health, The Armed Forces Institute of Pathology, and as a faculty member in the Department of Neurology at the George Washington University Medical Center.

Expanding access to educational opportunity drives much of the Ludwigs’ philanthropy. “Opportunity for education shouldn’t be about how much money you have in your pocket,” said Gene. “Merit, energy, and enthusiasm should drive access, otherwise you are denying your school the opportunity to have some of the most talented people. The Hurst Horizon Scholarship Program is not just something that’s nice to have. This is a must have for a law school, and if Yale’s precedent drives others to do the same thing, that’s a big bonus.”