Established in 2005 as part of a $30 million gift from the estate of Oscar M. Ruebhausen ’37, one of the largest gifts in the history of American legal education, the Oscar M. Ruebhausen Fund supports projects and programs proposed by students and faculty. Its purpose is to provide not general support but rather incremental benefits to the Law School for specific objectives. The Fund seeks to enhance the intellectual life of the Law School, particularly through support of collaborative work and interdisciplinary research. It also seeks to further the School’s leadership in developing innovative responses to changing societal needs and opportunities and in acting as a voice of reason, fairness and decency.

The Oscar M. Ruebhausen Fund Committee meets twice a semester during the academic year and accepts proposals on a rolling basis.

Representative Projects Supported by the Fund 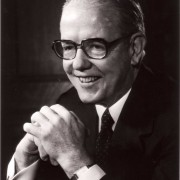 Ruebhausen was a distinguished member of the law firm of Debevoise & Plimpton LLP for almost fifty years, serving as its presiding partner from 1972 to 1981 and nourishing the firm from its roots to its place today among preeminent law partnerships.

He was president of the Bar Association of the City of New York, a key adviser to former New York Governor Nelson Rockefeller, general counsel to the Office of Scientific Research and Development during World War II, and chairman of the boards of the Russell Sage and Greenwall Foundations.