“Human rights are not a luxury, or something to be observed if they don’t conflict with some other priority, like peace or economic development. They are instead the key to achieving those things and anything else of urgent importance to the world.” — Robert L. Bernstein

Robert Bernstein (1923–2019) devoted his life to the defense of freedom of expression and the protection of victims of injustice and abuse throughout the world. He was an influential force in American publishing and a leader in the development of the international human rights movement. 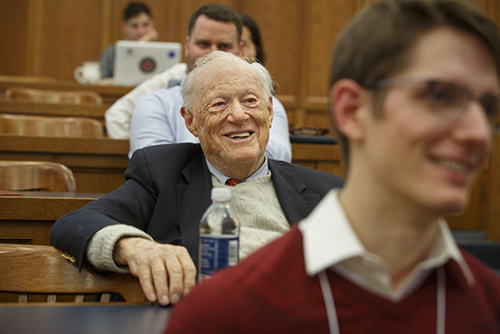 Mr. Bernstein was the founder and former chair of Human Rights Watch. He also served as chairman of the Association of American Publishers (1972–73) and was the founder and chairman of its Committee on International Freedom to Publish (1973–76). He founded the Fund for Free Expression in 1975 and was its chairman until 1990, when he became founding chairman. Mr. Bernstein played a leading role in the campaign to protect Soviet Jews. More recently, he was a strong advocate for respect for human rights in China and was chair of the board of the organization Human Rights in China.

Mr. Bernstein’s tremendous contribution to the human rights movement was complemented by his prominent career as a publisher, which began in 1946 at Simon & Schuster after he graduated from Harvard and served three years in the U.S. Army Air Corps. He joined Random House in 1957 and became its first vice president in 1962, president in 1966, and chief executive officer one year later. In 1975, he was named chairman of the board and served as chairman, president, and chief executive officer of Random House until 1989. In 1990, he became publisher-at-large of John Wiley & Sons and served for many years as a publishing consultant to the American Museum of Natural History and the New York Public Library.

In 1976, Mr. Bernstein received the Florina Lasker Award from the New York Civil Liberties Union. In 1987, the Lawyers Committee for Human Rights (now Human Rights First) presented him with its Human Rights Award. He received the Spirit of Liberty Award from the People for the American Way in 1989 and the Lotus Club Medal of Merit and the Curtis Benjamin Award for Creative Publishing from the Association of American Publishers in 1996. He has received the Barnard Medal of Distinction from Barnard College, honorary doctor of laws degrees from the New School for Social Research and Swarthmore College, and an honorary doctor of humane letters from Yale. He was a member of the Council on Foreign Relations and was Chairman of the Executive Committee of the Aaron Diamond Foundation; he also served on the Advisory Committee of the Carter-Menil Human Rights Foundation and the Advisory Board of the Robert F. Kennedy Human Rights Award.