The Thurman Arnold Project at Yale (TAP @ Yale) and the Law, Ethics & Animals Program (LEAP) at Yale Law School were delighted to co-host “Big Ag & Antitrust: Competition Policy for a Sustainable and Humane Food System,” a virtual conference on the role and power of antitrust and competition law and policy in shaping the American food system. The conference was held on Saturday, January 16, 2021. 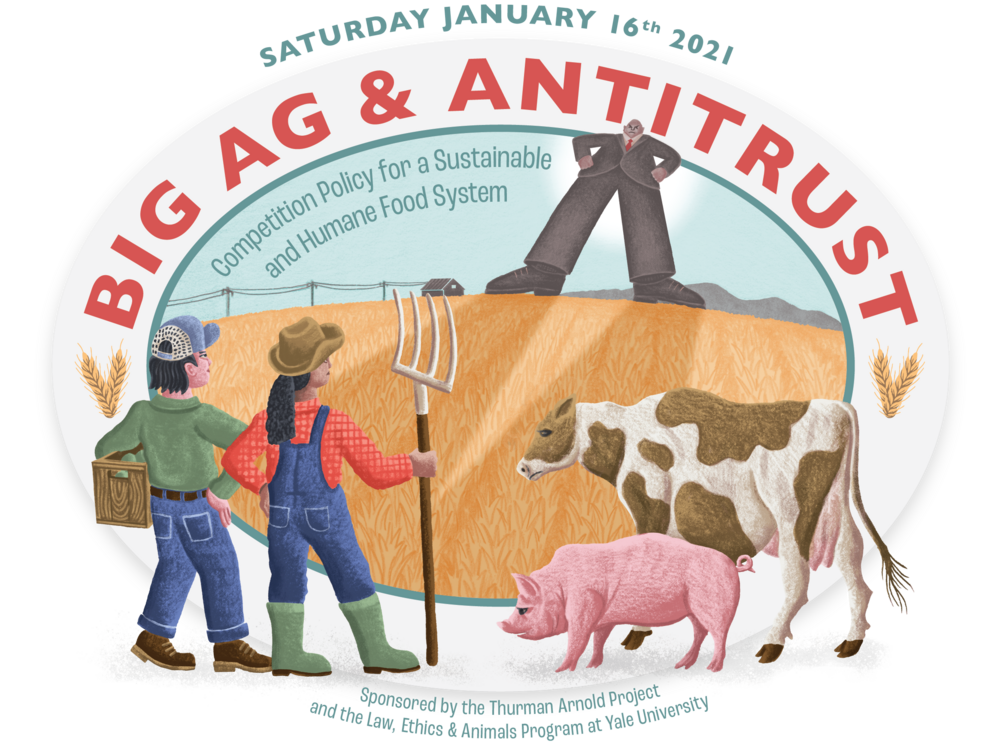 Since the mid-20th century, a handful of corporations have grown to dominate America’s farm and food sectors. As of this conference, the country’s four largest pork producers, beef producers, soybean processors, and wet corn processors control over 70 percent of their respective markets. Four companies control 90 percent of the global grain trade. Agrochemical, seed, and many consumer product industries are likewise now controlled by just a few mega-sized firms. The implications of these corporations’ consolidated market power -- and in turn their consolidated political power -- are profound for people, animals, the environment, and our democracy alike.

In recent years, a growing tide of scholars, lawmakers, and members of the public at large have expressed increasing concern that food- and agribusiness corporations have become too big and too powerful. Many critics have called for a revival of stricter antitrust enforcement, more assertive antitrust authorities, and a general rebalancing of economic power.

This conference aimed to explore the role of antitrust and competition policy in creating America’s food system and its potential for improving it. We hope the conference sparked research, heightened enforcement attention, and stimulated new ideas for policy reforms to achieving more competitive, sustainable, and humane agriculture markets.

The conference convened academics, enforcers, policymakers, practitioners, journalists, and beyond to share ideas for how to jointly address concentration in agriculture. They discussed what kinds of reforms are needed in antitrust enforcement and regulation to address problems in the food system and how these changes should be designed. It also considered the relationship between competition policy and broader concerns associated with industrial agriculture—including climate change, animal welfare, sustainability, public health, and inequalities facing workers, farmers, and rural communities. In addition, the conference considered policy recommendations, including changes in the interpretation of antitrust laws and doctrines, new legislation, regulations, enforcement practices, and the institutional organization of agencies.

The authors of selected papers were invited to present their work at a virtual conference on Saturday, January 16, 2021.

The Thurman Arnold Project (TAP@Yale) launched in fall 2019 in response to the growing interest in competition enforcement by scholars, students, and the general public. The project is named in honor of Thurman Arnold, Yale Law Professor and head of the Antitrust Division from 1938-43, to capture the intellectual and enforcement tradition he represented, as well as his zeal for achieving competitive markets for the people of the United States. The project was founded by Professor Fiona Scott Morton, an economist at the School of Management, and is designed to bring together Yale scholars and students who are interested in antitrust to engage with one another and create rigorous antitrust research and policy, disseminate it, and enable links to enforcement and regulatory policy.

The Law, Ethics & Animals Program (LEAP) at Yale Law School, also launched in fall 2019, is a multidisciplinary think-and-do tank at Yale dedicated to: (1) drawing the attention of leading thinkers and doers to the deep questions of conscience and law that human-animal relationships and industrialized animal cruelty raise; and (2) empowering Yale University scholars and students to produce positive legal and political change for animals, people, and the environment upon which they depend.