Seeking Fair and Just Treatment in the Criminal System 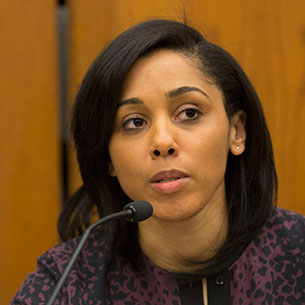 Sia Sanneh ’07 is a senior attorney at the Equal Justice Initiative. After graduating law school, she was a Liman Public Interest Fellow in New York, where she studied the collateral consequences of school-based arrests. She spoke to the Yale Law Report about her work in 2016.

YLR: What is the nature of your work at the Equal Justice Initiative?

Sia Sanneh: At EJI, I work in each of our project areas, all of which are related to ensuring that poor people and people of color receive fair and just treatment in the criminal system. A lot of this work involves providing free criminal representation to clients who are trapped in the system, whose trials were infected with racial bias or prosecutorial misconduct, and who cannot afford to hire legal counsel. This includes the folks on death row: Alabama has no state-wide public defender and is also the only state in the country without a state-funded program to provide legal assistance to death row prisoners. So there is a tremendous need for legal representation, and for more than twenty-five years EJI has been trying to help the men and women who are facing execution and desperately seeking legal help.

More recently, we began a campaign to change the way kids are treated in our criminal justice system. We were working with kids who had been sentenced to death before the U.S. Supreme Court abolished this practice, and we also started working with young teenagers—some as young as thirteen—who had been tried as adults, and sentenced to die in prison. We wanted to challenge these incredibly harsh punishments, and after several years of litigation in state courts throughout the South and elsewhere, we won a couple of cases at the U.S. Supreme Court including Graham v. Florida (2010) and Miller v. Alabama (2012), which abolished mandatory life sentences for children.

Finally, I am also involved with EJI’s newest race and poverty project. We believe there are deep historical roots to the unjust and racially discriminatory policies that have made mass imprisonment a crisis in so many communities of color. So we are developing a series of education and community outreach projects designed to document the history of racial injustice in the Deep South and beyond, and to explain the connection between our history and the contemporary challenges we are facing, especially in the criminal justice system.

YLR: What makes you so passionate about the work you are doing?

Sanneh: It is a privilege to represent our clients. These men, women, and kids show tremendous bravery and humanity in the face of extraordinary challenges. I’ve worked with clients who were executed, and I have experienced their strength and compassion in the face of a system that is cruel and absurd. To be in proximity to that kind of courage inspires me to do more for all of our clients. Everybody deserves fair treatment in our system, and you have no chance at that without a lawyer who is willing to fight for you.

One of EJI’s long-time clients, Anthony Ray Hinton, spent thirty years on Alabama’s death row for crimes he did not commit before he was exonerated and finally left prison last year. Our team, led by Bryan Stevenson, spent fifteen years fighting for his release, and we lost in every court in Alabama before the U.S. Supreme Court finally intervened and set the stage for Mr. Hinton’s release. Mr. Hinton is now working with us to advocate for reforms to the system that kidnapped him and stole thirty years of his life. Mr. Hinton talks passionately about racism and the fact that but for being born African American and poor, this horrific ordeal would not have been forced upon him. But he also speaks about forgiveness and faith, and does so with a sense of humor and selflessness that is both remarkable and really inspiring and makes me want to work even harder on these issues.

YLR: How did your legal training—including your time at the Law School—prepare you for pursuing your professional aspirations?

Sanneh: Judith Resnik was my Civil Procedure professor, and reading about the Texas Prison Litigation in her class was the first time I thought I hadn’t made a huge mistake by coming to law school. I ended up becoming her teaching assistant for that class and later on, as Senior Liman Fellow in Residence, co-taught classes with her, and have learned a tremendous amount from her over the years about how procedures can create and perpetuate injustice. During my first year I also joined the Lowenstein Clinic, led by Professor Jim Silk ’89. He encouraged my interest in prison and criminal justice work, and helped me find human rights projects I could do in the clinic along these lines—access to medicine in South African prisons, a report on the criminal justice system in Zambia, an investigation into zero tolerance policies in schools in the United States—projects that kept me engaged in law school. And finally, I took Steve Bright’s class on capital punishment during my second year, and that changed my life. I started to see the depth of the problems in the criminal system and in the South in particular, and to believe not only that lawyers could make a difference but that we all have an obligation to ensure that the system works for everyone, not just the wealthy.

YLR: Can you discuss the nature of your work as a Liman Fellow, as well as your role now as a visiting lecturer in the Capital Punishment Clinic?

Sanneh: Capital work requires incredible care and attention to detail. The appellate system is full of traps and landmines—deadlines, procedures, and requirements that lawyers are responsible for. Any mistake can cost a client his or her life. Our system should not operate that way, and EJI is pushing to change it, but that is the system we have now and it requires great skill and care. Lawyers must possess substantive knowledge of several areas of law, including procedure, criminal law, evidence, and constitutional law—all of which we touch on in the Clinic. It’s also a system that is organized around protecting convictions, even ones like Mr. Hinton’s that were unfairly obtained after perfunctory trials. So the Clinic really prioritizes legal research skills, and making sure students are equipped to do exhaustive and thorough research in very complicated areas of law. But perhaps most importantly, capital defense lawyers need to be really strategic about how they present arguments. The clients and their stories need to be presented in a really careful and thoughtful way, so we work on those written and oral skills as well.

I also try to share with students some of the ideas that motivate me and all of us at EJI. We believe that everyone is more than the worst thing they have ever done. That if you lie you are not just a liar, that even if you kill someone you are more than a killer. Even when people are convicted of a crime, they posses a humanity and dignity that must be acknowledged.

And finally, I think being responsible for a client’s life is really humbling. It’s not about you. And I think for students in law school that humility is a really important concept to internalize.