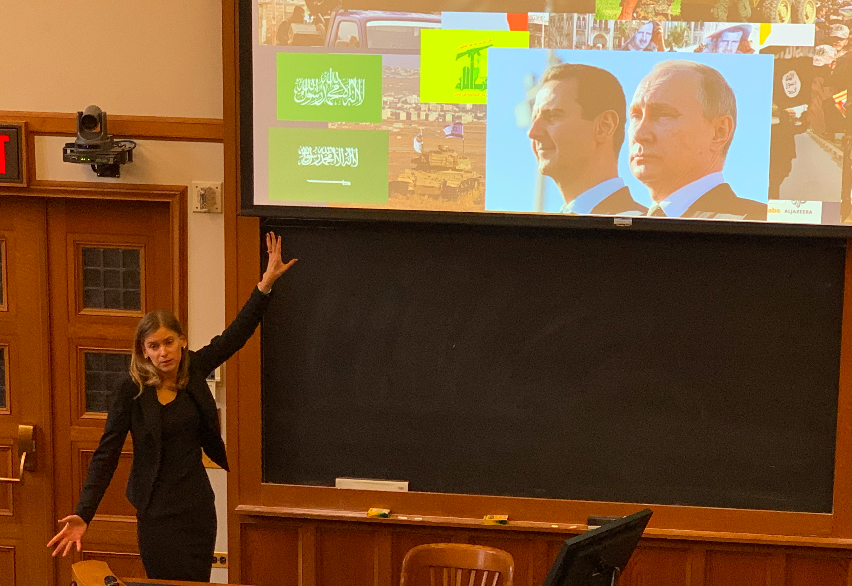 Lawyers on the Ground: Legal Considerations in the Fight Against the Islamic State

On February 26, Margaret Donovan, an Assistant United States Attorney in the District of Connecticut and former JAG Corps officer in the U.S. Army spoke to the Center for Global Legal Challenges about her experiences during combat deployments in Iraq and Syria. Her talk focused on a wide variety of issues including working and living with the Y.P.G., the Kurdish forces who fought against the Islamic State, and offering legal advice on targeting and airstrikes. In particular, Ms. Donovan addressed the experiences of lawyers on the ground and the domestic and international legal authorities that apply in the fight against the Islamic State. 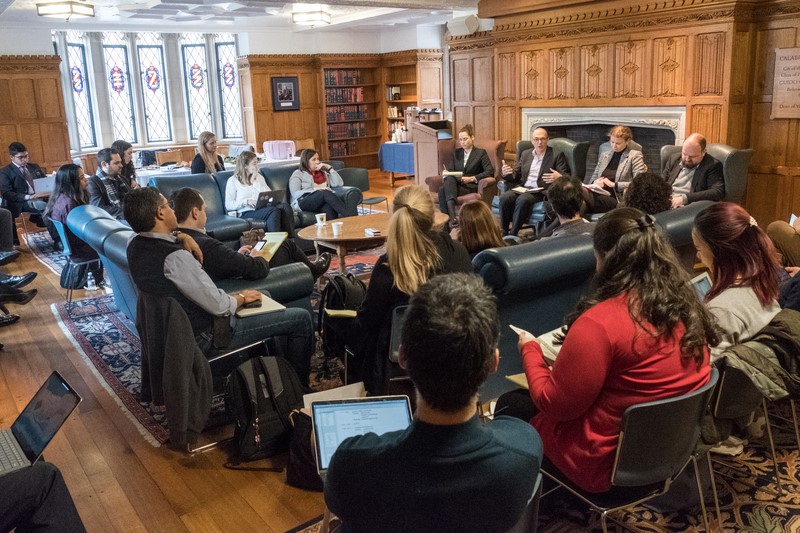 The two-day Yale Cyber Norms Workshop that took place on February 7th and 8th featured practitioners and academics from a variety of backgrounds. Attendees included academics from computer science, law, socio-political studies and policy, and expert practitioners from incident response, capacity building, inter-organizational cooperation, as well as corporate and public policy. The workshop was meant to be on the smaller side and allow proper discussions betweeen all attendees. Organized around five panels geared towards full-room discussion, the workshop touched upon various key issues in law and norm making when confronted with real-world complexities and technical or operational realities. The workshop was conducted under Chatham House rules but a report will be made available. This workshop was generously supported by the Oscar M. Reubhausen Fund and the Yale Law School Cybersecurity Initiative. 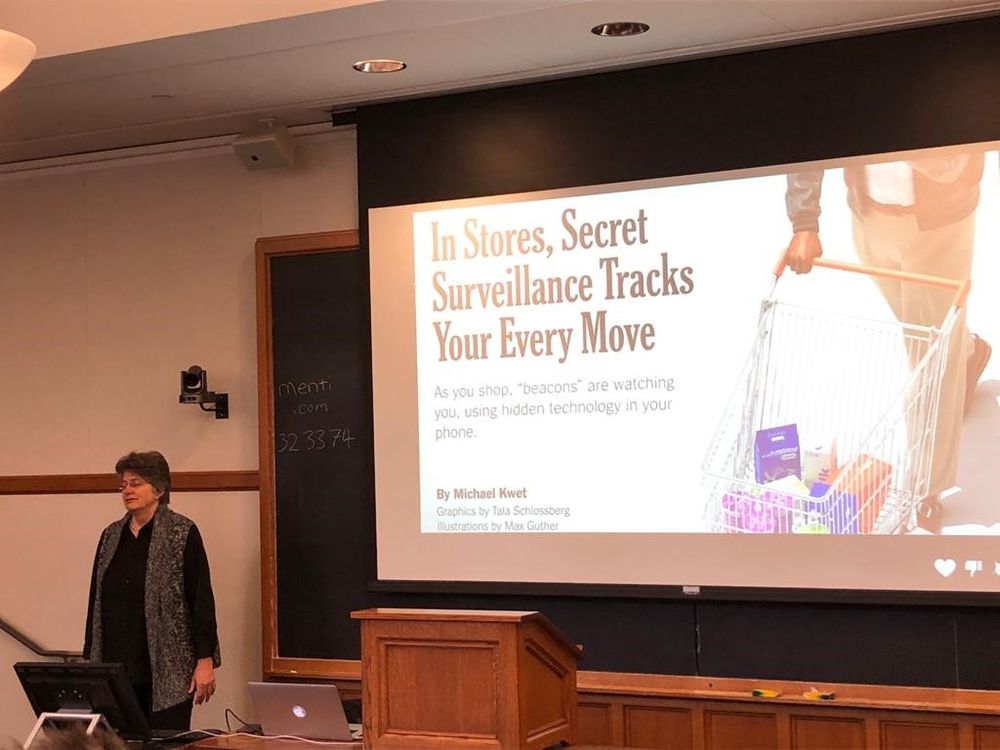 What My Phone & Computer Do When No One is Looking, April Lorenzen

Using practical, real-world examples in an interactive talk, on January 28, 2020 April Lorenzen gave the YLS community some insights into how tracking actually works, and what technologies can be, and are, used to collect data about users. Furthermore, she demonstrated how difficult it is to counteract said tracking. Giving one simple example, devices do not have proper switches to turn on and off wireless communications like Bluetooth and Wi-Fi. Instead users have to rely on menus and software toggles that sometimes do not work as expected. The pervasive nature of tracking and the lack of user control fed into the final discussion about true user consent and the use of all the data that is being collected. 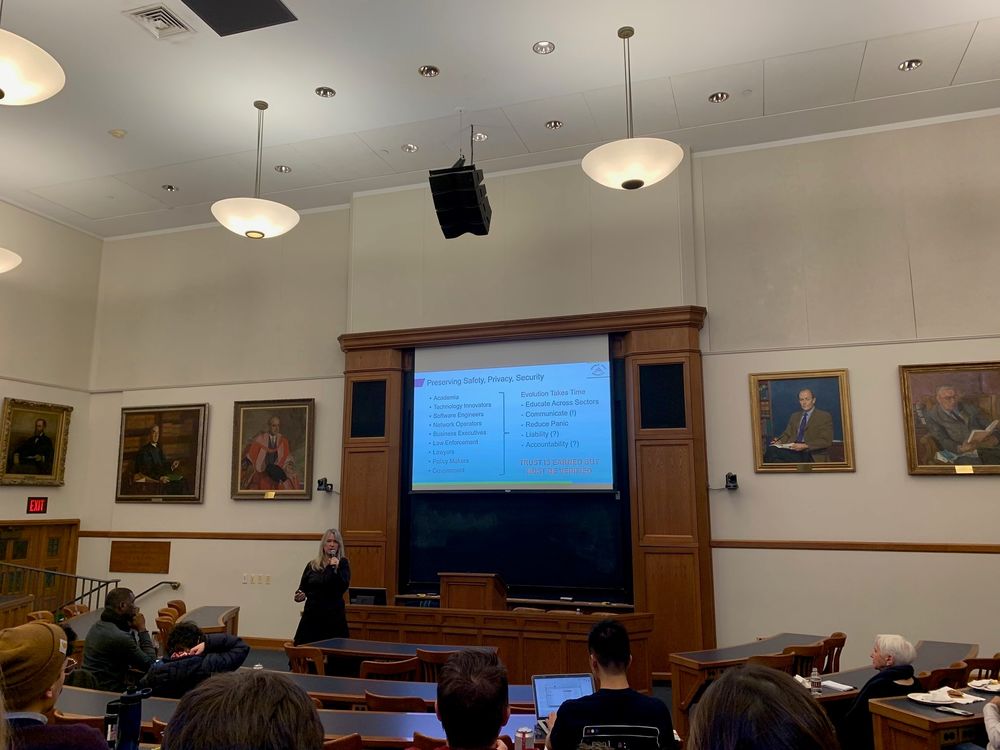 Privacy and Trust - An Illusion or An Achievable Reality In Digital Societies, Merike Kaeo, CEO and founder of Double Shot Security

Why are we so vulnerable, why are there so many breaches? Using her years of experience in information technology, on January 21,2020  Merike Kaeo walked Yale Law students and scholars through a variety of intertwined security and privacy issues.  She connected individual anecdotes and incidents to form a bigger picture of security in the information age. For example, Merike outlined how the internet has shifted in character profoundly, how old understandings of security and technology got challenged rather rapidly and must evolve further, and how we can learn from edge-cases like Estonia that started developing (legal) frameworks for the Information Age before most other Nations.

Space Debris and the Tragedy of the Commons: Lunch Talk with NASA Senior Attorney 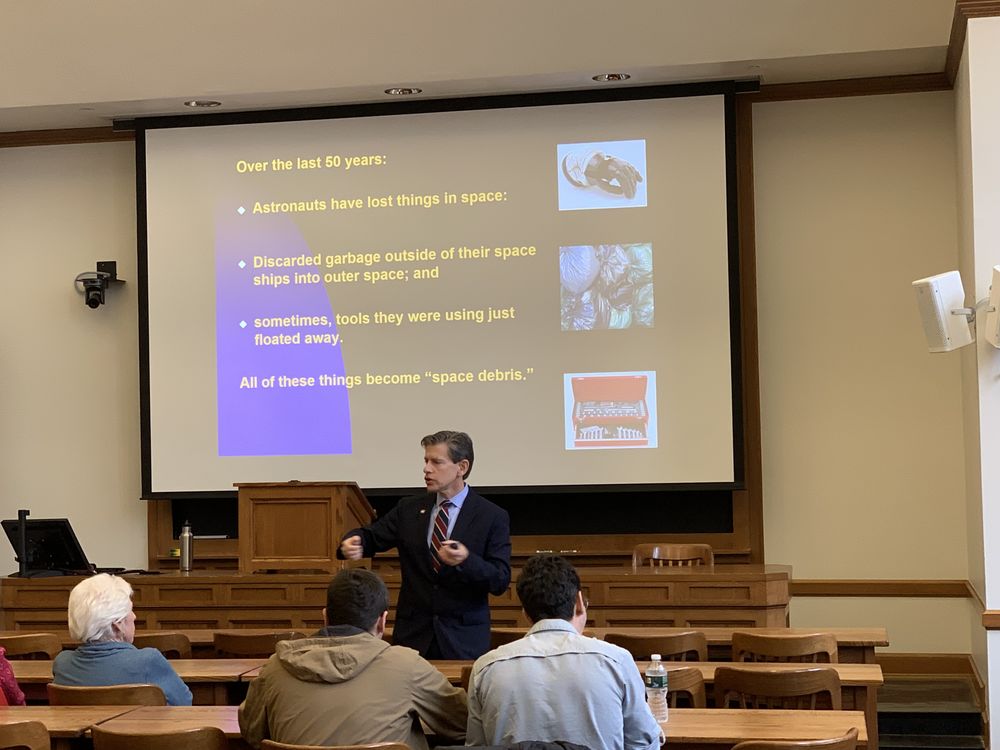 On November 20, Steve Mirmina, a Professor of Space Law and member of the International Law Division in the NASA General Counsel’s office, spoke about the growing challenge of space debris and what international law can do to address this challenge. Mr. Mirmina first addressed the sources and harms of space debris, including describing how anti-satellite testing has become the largest source of debris. He also addressed the ways that countries can attempt to address space debris including new technologies and strategies that are currently being developed, scheme for insurance for space debris clean up, and international treaties that might apply. 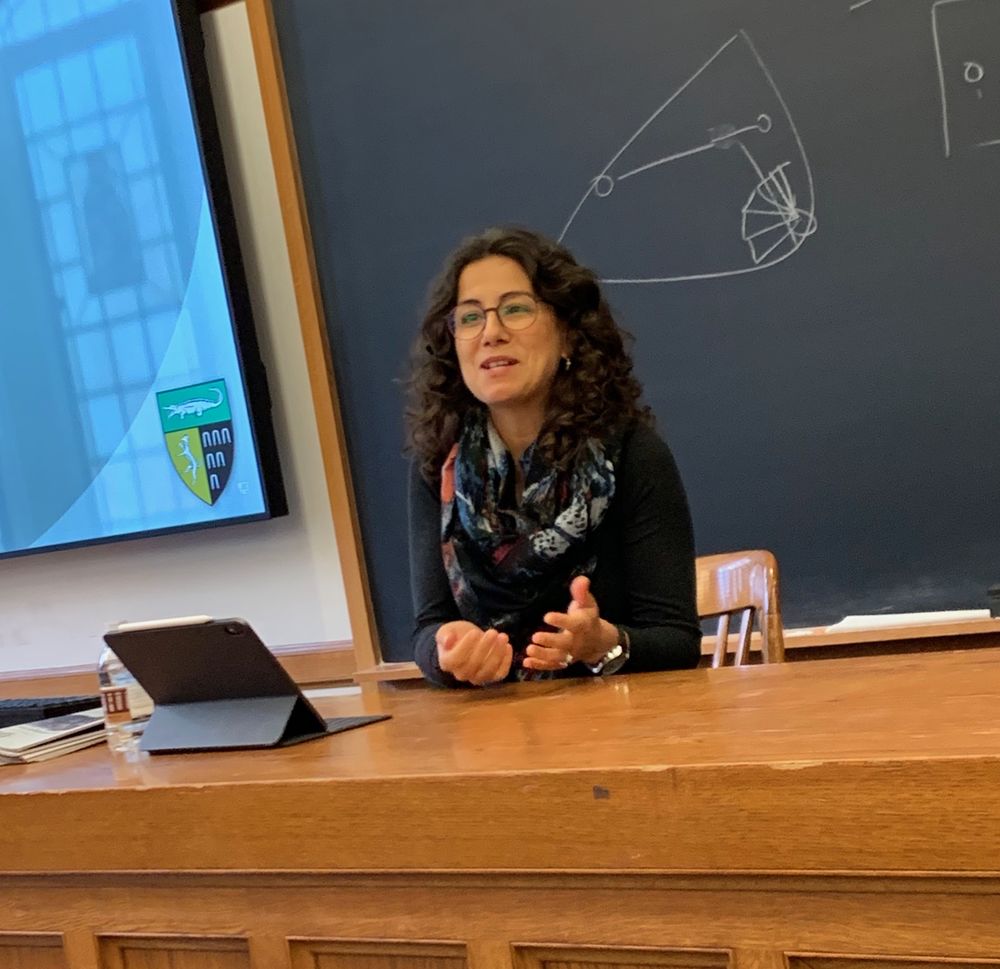 On November 18, 2019 Onur Burçak Belli, a Syrian-Turkish journalist and a current World Fellow at Yale University, spoke to students as part of the Center for Global Legal Challenges’ Neuman Lecture Series. Ms. Belli spoke about recent events in the Middle East, in particular the experiences of Syrian refugees in Turkey, the historical and political dynamics surrounding Kurdish populations in the region, and Turkey’s recent incursion into Syria. She drew on her experiences reporting in both countries to address how the Syrian Civil War has resulted in millions of individuals being displaced from their homes. 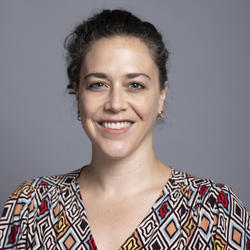 On November 12, 2019 Cristina Vélez Valencia, the former Secretary for Social Integration in Bogota and a current World Fellow at Yale University, spoke to students as part of the Center for Global Legal Challenges’ Neuman Lecture Series. Ms. Vélez Valencia discussed how Bogota, Colombia has approached the challenge of assisting Venezuelan refugees that have arrived in the city, including through providing social services and gaining popular support for the initiative. The conversation also addressed the ways that the government of Bogota relied on international human rights treaties to bolster its adoption of a welcoming approach toward immigrants. 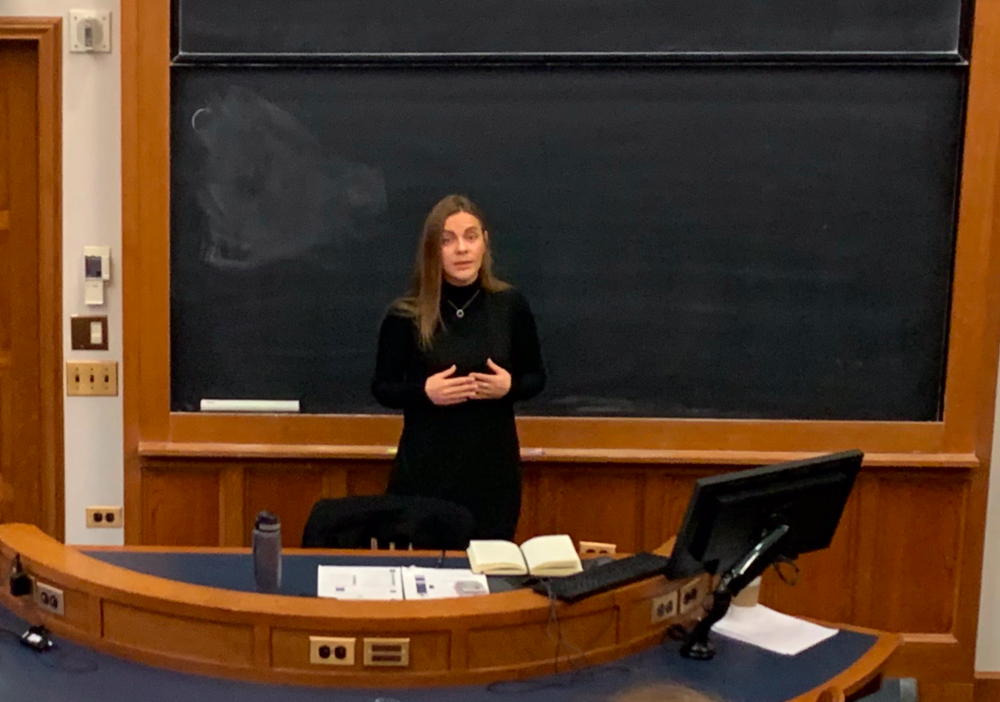 On November 5, 2019, Olena Sotnyk, a former member of the Ukrainian Parliament and a current World Fellow at Yale University, spoke to students as part of the Center for Global Legal Challenges’ Neuman Lecture Series. Ms. Sotnyk covered three main challenges faced by Ukraine: the conflict in Crimea, corruption, and the role of oligarchs. The conversation also addressed what lessons could be drawn from Ukraine’s experience for other Eastern European countries and the United States.

Addressing the Emerging School Cybersecurity Crisis: Why it Matters and What We Can Do About It, Douglas A. Levin, President and founder of EdTech Strategies, LLC

On November 12, 2019 Doug Levin gave a talk about the issue of Cybersecurity and K12 education, highlighting the dramatic shift from a lack of technology at schools to increasing numbers of IT-Security incidents at schools, as well as growing data privacy concerns. Highlighting the complexity of the issue that involves corporate players but also federal and state-level policy and politics, Doug discussed the current trends in school IT systems and their security issues. 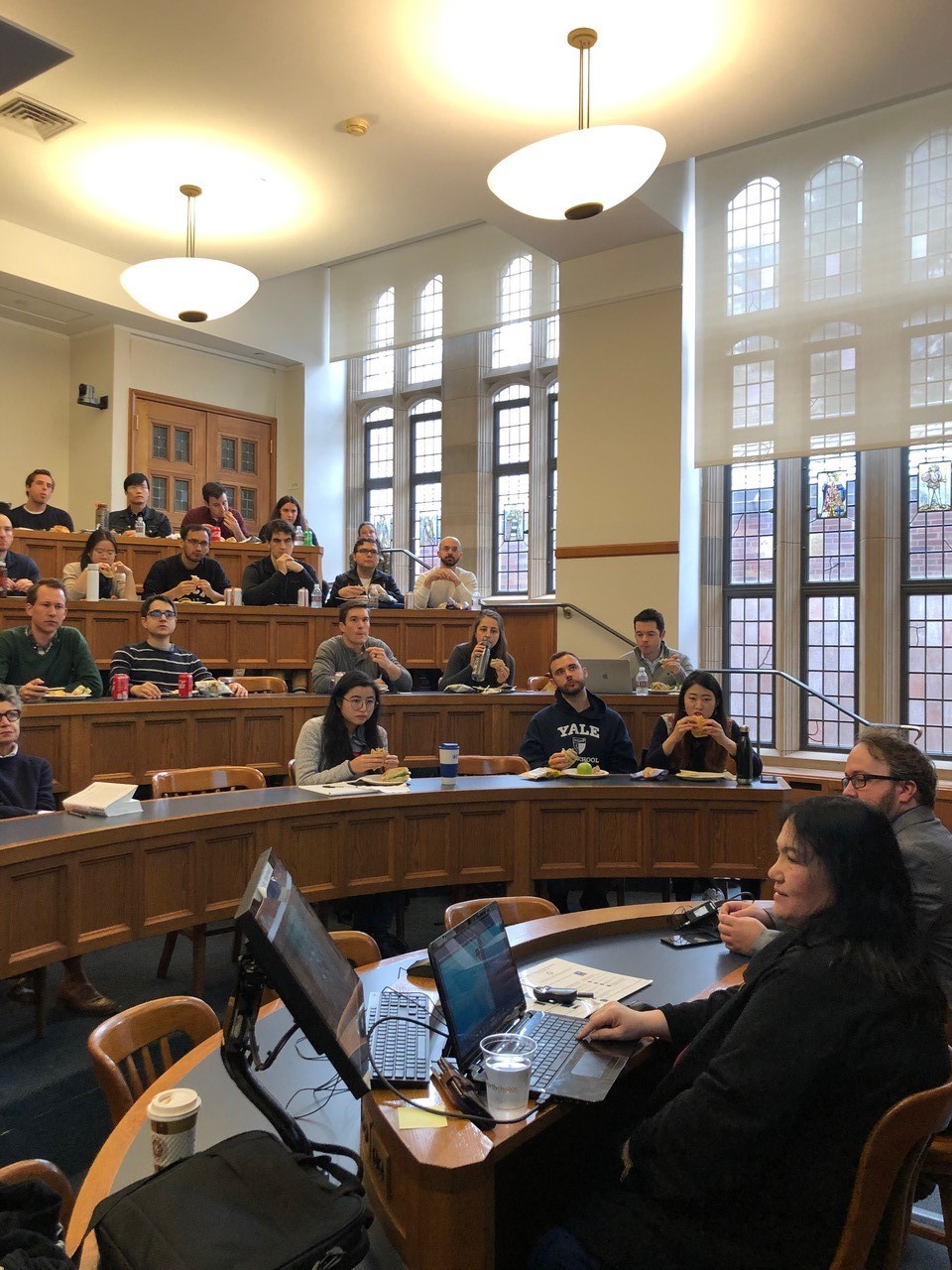 On October 29, 2019, Marcia Wilbur spoke to and answered questions by the Yale Law School community about her activism regarding a variety of civil rights issues, including recent copyright legislation, the abuse of takedown notices by corporate actors, surveillance capitalism, their impact on open and free software but also the maker community, for example when it comes to 3D printing. Marcia highlighted how all these themes interact, and how difficult it often is for consumers but also platforms to address and deal with the legal dimension of sharing information online.

The US-China Battle for Cyberspace. How Washington and Beijing are using tech, diplomacy, and trade to shape cyberspace? 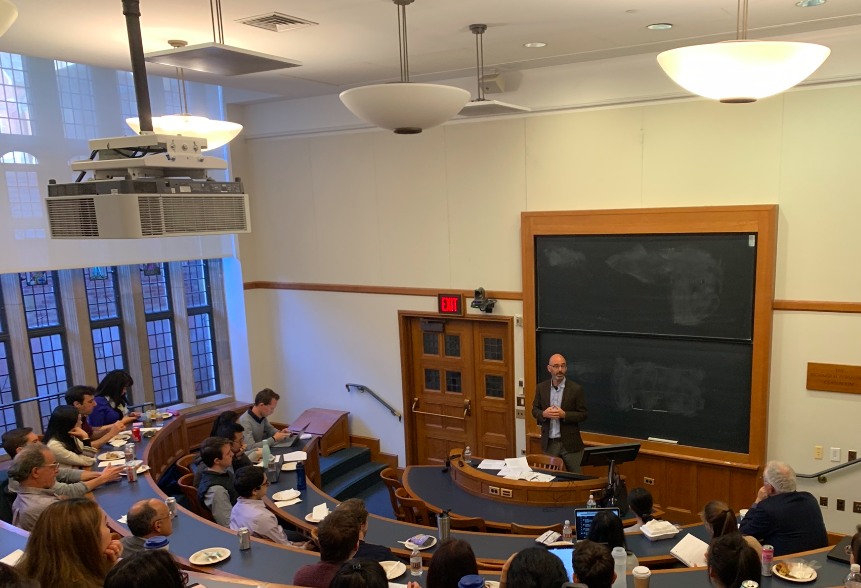 On October 15, Adam Segal discussed the thesis of the “escalating digital cold war” between China and the United States, as termed by the New York Times. Responding to questions by the Yale Law School community, Adam spoke to the use of punitive measures, the role of cyber strategy, and how they impact on key questions like 5G and Huawei equipment used in US networks. 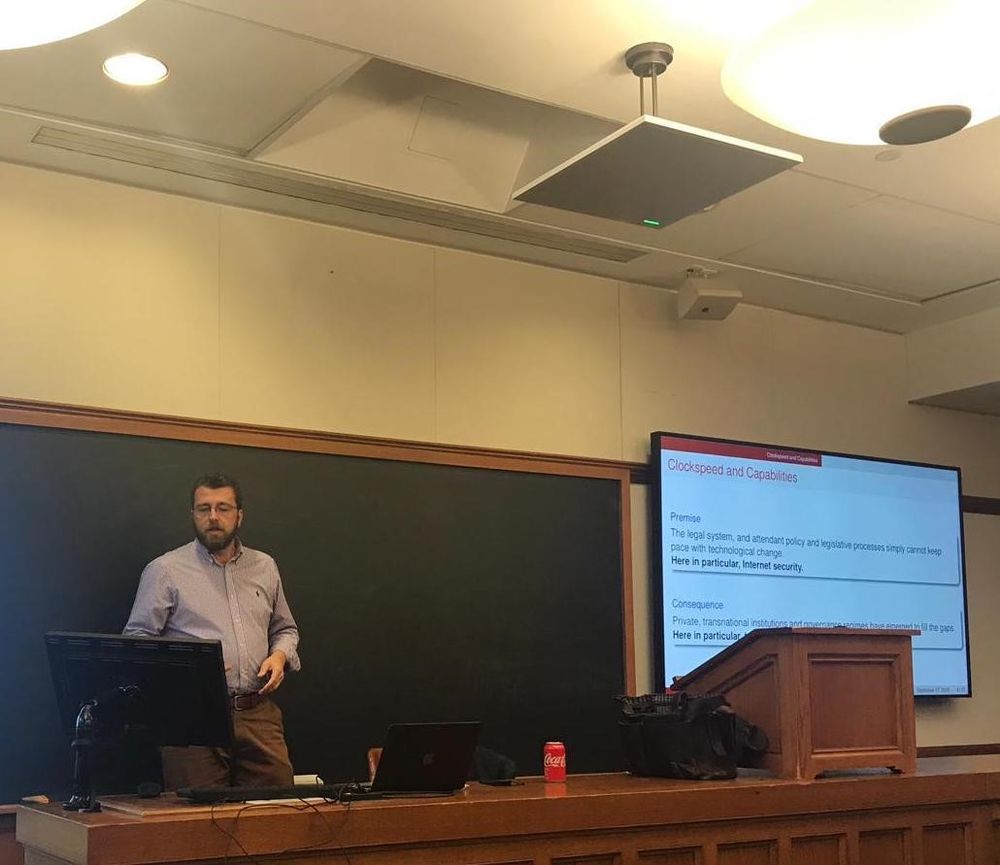 On September 17, Jesse Sowell presented his work on cybersecurity threats and how private and state actors need to combine their interdependent capabilities. He argues that due to how the internet infrastucture is set up technically and in terms of ownership, and due to the skills and abilities held by private actors, law enforcement cannot tackle cybersecurity threats and threat actors on their own. At the same time, private actors do not have enforcement powers but also need support from law enforcement to deal with the challenges involved actually pursuing, charging, and convicting cybercriminals in various jurisdictions. The participants and Jesse discussed various issues surrounding his thesis and underlying empirical research, for example the role of information sharing in light of the GDPR and the nature of collaboration in this space 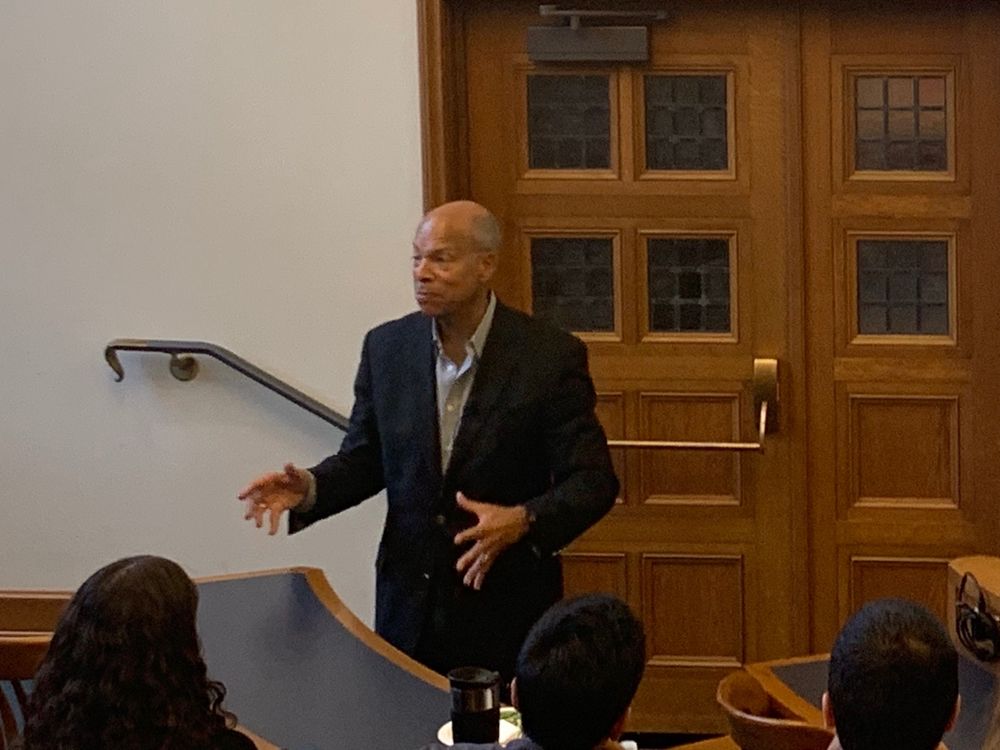 On September 17, Jeh Johnson, the former Secretary of Homeland Security and General Counsel of the Department of Defense, spoke at an event hosted by the Center for Global Legal Challenges and the Yale Law School National Security Group on September 17, 2019. The discussion centered around the use of war powers from the practitioner’s lens. Secretary Johnson outlined the domestic and international legal authorities underlying the Department of Defense’s targeting decisions. He then posed a number of scenarios and real-life examples to students to emphasize the legal complexities that arise in the Department’s work. Gerard C. and Bernice Latrobe Smith Professor of International Law Oona Hathaway ’97, Director of the Center for Global Legal Challenges, and Secretary Johnson also discussed the scope of the Executive’s war powers with Secretary Johnson and the appropriate degree of Congressional involvement.