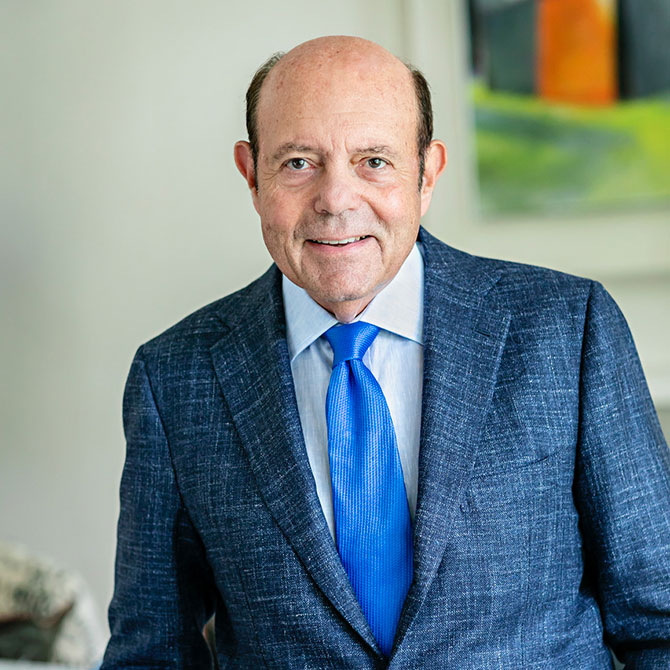 Gene Ludwig has achieved great success as a regulator, innovator, and business executive, yet he has never forgotten the lessons his parents instilled in him growing up in rural York, PA. Gene’s father, a small-town doctor, would often accept chickens as payment. “Throughout my career, I’ve felt a deep obligation and responsibility for the people I work with as well as the less fortunate,” said Ludwig.

Having empathy for others, staying true to oneself, and demanding the highest integrity standards are the core leadership values that matter most to Ludwig.

“My leadership journey was built on hard work, getting a good education, and becoming better at what I do — both in good and bad times,” said Ludwig. He credits his excellent education at YLS as the cornerstone that allowed him to do everything in life — from becoming a lawyer, working in government, and becoming a businessperson who pushes for positive change for low- and moderate-income communities.

“YLS was academically rigorous, and I benefited from the Socratic method of being questioned in front of your peers. My peers were also important, as there was much to learn from them,” said Ludwig.

Ludwig is Managing Partner for Canapi Ventures, a venture capital firm focused on investments in early to growth-stage fintech companies; Founder and CEO of Ludwig Advisors, which counsels financial firms on critical matters; Founder and former CEO and Chairman of Promontory Financial Group, a regulatory consulting firm he sold to IBM; and Founder and Former Chairman of Promontory Interfinancial Network (now IntraFi Network). He was U.S. Comptroller of the Currency during the Clinton administration.

“I have insisted that those working for me carry out their duties not only with the highest standard of integrity, but with collegiality,” said Ludwig. “I have always endeavored to give them space to grow and succeed by recognizing that everyone has a skill or talent that is uniquely wonderful. I want to bring those skills out in people and put them in a position to achieve their dreams,” said Ludwig.

When faced with obstacles, Ludwig says the fun is working to overcome them. “To improve and grow, it is also important to work hard on your natural weaknesses. Never be so daunted that one just gives up and doesn’t continue the race. The worst thing you can do is give up. A trick I use in life has been to dig in, work hard, be creative, and not give up. Jumping around and failing to solve or avoid obstacles altogether leaves one weakened, not strengthened,” said Ludwig.

Ludwig founded The Ludwig Institute for Shared Economic Prosperity (LISEP), a non-profit organization dedicated to improving the economic well-being of middle-and lower-income Americans. Its research includes the creation of more meaningful economic indicators for unemployment, earnings, and cost of living. LISEP’s statistics aim to provide policymakers and the public with a more realistic view into the economic situation of all Americans as compared with traditional metrics.

He is also Co-founder, along with his wife Dr. Carol Ludwig, of the Carol and Gene Ludwig Family Foundation, Inc. (LFF), a 501(c)(3) private foundation based in Washington, D.C.; Carol runs and is President of LFF. The foundation makes contributions to organizations that accelerate medical and scientific discovery, particularly in the area of neurodegenerative diseases. It also creates and contributes to programs that advance access to educational and economic opportunity for young people and seeks to enrich and strengthen the communities where the Ludwigs live and work.

Ludwig has written numerous articles on banking and finance and has been a guest lecturer at Yale, Harvard’s law and business schools, and Georgetown’s International Law Institute.

Ludwig has published pieces in The Financial Times, The New York Times, The Atlantic, The Wall Street Journal, The Washington Post, Politico, American Banker, Time, and on CNBC.com. His book, The Vanishing American Dream: A frank look at the economic realities facing middle- and lower-income Americans, was published in September 2020.

If Ludwig could give advice to his former law school self, he would say, “Shoot high. Treat people fairly and with dignity. Integrity and hard work are coins of the realm. We have an obligation, particularly as Yale Law grads, who have benefitted from so much time, effort, and national resources, to leave the world just a little bit better than we found it.”