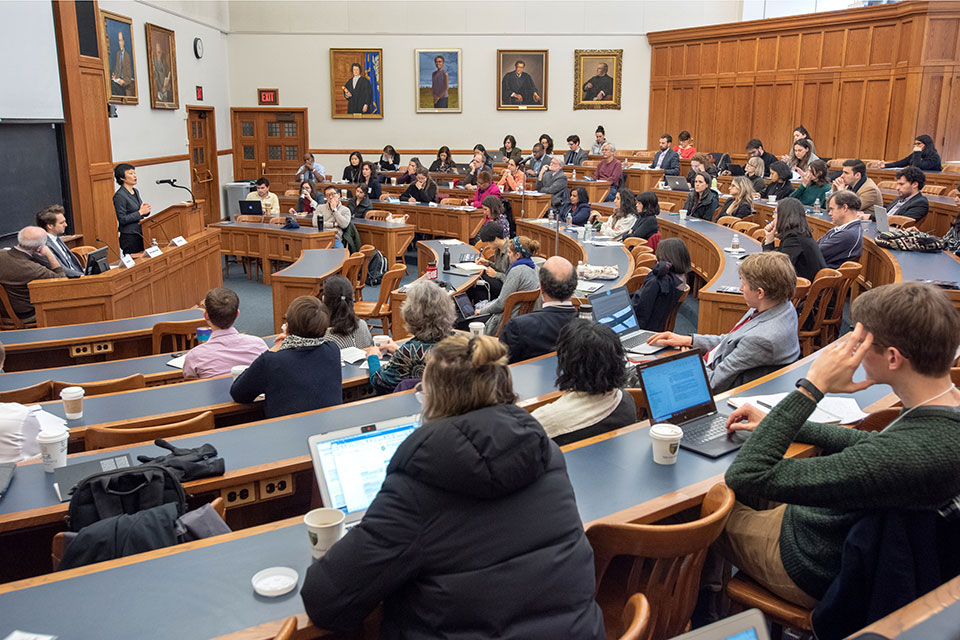 The twenty-first annual Bernstein Symposium, entitled “Borders, Refuge, and Rights,” explored questions related to forced displacement and the international refugee regime. The Symposium’s speakers drew on diverse modes of analysis to address a topic that — with 68.5 million people forcibly displaced by conflict, persecution or violence — is more urgent than ever.

The Symposium’s keynote speaker was acclaimed writer Chris Abani, who fled Nigeria during the Biafran Civil War and who has built a career writing fiction, plays, poetry, and essays. Abani’s remarks, which blended poetry, narrative, and analysis, engaged with the nature of the refugee — and the human — experience. “In the body of the refugee,” he said, “we come to terms with the fragility of nationhood, with the fragility of any kind of safety. Identity is fluid and never actualized, and our own denial of this is probably at the heart of the human experience.”

Sarah Stillman, a staff writer for The New Yorker and the Project Director of the Global Migration Project, responded to Abani’s comments. One theme she spoke about was the dangers of “defining people by their victimization.” She argued that storytelling should “show people in acts of creativity and acts of love,” which are often left out of current representations of refugees.

In the Symposium’s first panel, “Ideas,” Sarah Song, professor of law and political science at UC Berkeley, argued that the international refugee regime is “failing in its stated goals” and outlined her vision for change. Among other improvements, Song advocated for shifting emphasis toward “robust development assistance” — an approach focused on education, governance, and building refugees’ and governments’ capacities rather than delivering humanitarian aid. “Addressing the challenges of refuge and migration,” she said, “cannot happen without ending violence and supporting economic reconstruction and community engagement.”

Song also proposed that states have a special, “remedial responsibility” towards refugees in whose displacement they played a role. The distribution of resettlement of refugees should be decided based on this concept of remedial responsibility, as well as a state’s capacity to integrate refugees. Song argued that states should see resettlement, not just non-refoulement (the practice of not returning refugees to the places where they faced persecution), as a binding moral duty. Robina Foundation Visiting Human Rights Fellow Paul Linden-Retek ’12, who responded to Song’s comments, agreed, adding that we have to reckon with the fact that the “reasons people flee are the result of a way that some of us have decided to live — wars, drugs, markets, patents.” Linden-Retek argued that the rights of refugees are not just corrective or remedial, but rather reveal terms of enduring relations of power in the global supply chain and between states.

Following the first panel, artist Mohamed Hafez spoke about his exhibition UNPACKED: Refugee Baggage, which ran in conjunction with the Symposium. For the exhibit, Hafez and writer Ahmed Badr interviewed local refugees about their stories. Then, Hafez sculpturally recreated the war-torn rooms, buildings, and landscapes the refugees recalled, placing the miniature scenes inside suitcases and pairing them with audio from the interviews.

In his talk, Hafez described watching the violence in his home country, Syria, unfold from the United States. “How do you weep creatively about the loss and destruction of heritage, culture, art, language, everything?” he asked. Hafez found an answer in his detailed modeling processes, which he described as “cathartic.” But beyond the personal catharsis, he felt it was important as a Muslim artist “to tell the world that our differences are something that you build on and thrive on.”

The second panel, titled “Institutions,” explored the potential of transnational cooperation to uphold refugee rights––and to undermine them, as does the increasingly prevalent practice of major powers’ evading legal obligations to refugees by outsourcing border policing to poorer, neighboring countries. For instance, Bill Frelick, Director of the Refugee Rights Program at Human Rights Watch, emphasized that externalization, which he defined as “extraterritorial state actions to prevent people from setting foot in a jurisdiction where they could claim rights,” can happen with or without transnational cooperation.

Leah Zamore ’14, Senior Policy Analyst at the Center on International Cooperation, focused her remarks on the International Monetary Fund (IMF). Zamore argued that the IMF is the “biggest player in refugee rights” right now, and contended that the IMF limits host countries’ capacities by “making countries pay extreme debts rather than focus on serving refugees.”

Finally, Sana Mustafa, Consultant and Co-Founder of the Network for Refugee Voices and herself a refugee, focused on the way that international institutions tend to ignore refugees’ voices in their decision-making processes. “There is no access for us to participate in these conversations,” she said.

The panelists acknowledged that context can shape strategy in different ways. Hakiki, for example, explained that because of the hostile political climate she was working in, “We’ve been backed into a corner of being very conservative with our legal strategies. We just want existing law to be applied.” Others, however, said that hostility provided what Metcalf called “an invitation to be bold.” A significant theme of the panel was the relationship between law and public mobilization. Robertson argued that “the aim of strategic litigation needs to be to shift public opinion to a place where the government can no longer ignore it.” Conversely, Shebaya pointed out, “Audacious litigation strategies work best when they are accompanied by a large public outcry.”

The 2019 Symposium offered the opportunity to discuss new ideas and strategies related to refugee rights. Political theorists, artists, and advocates came together to forge a deeper understanding of one of the most pressing issues in international human rights and to envision paths forward.