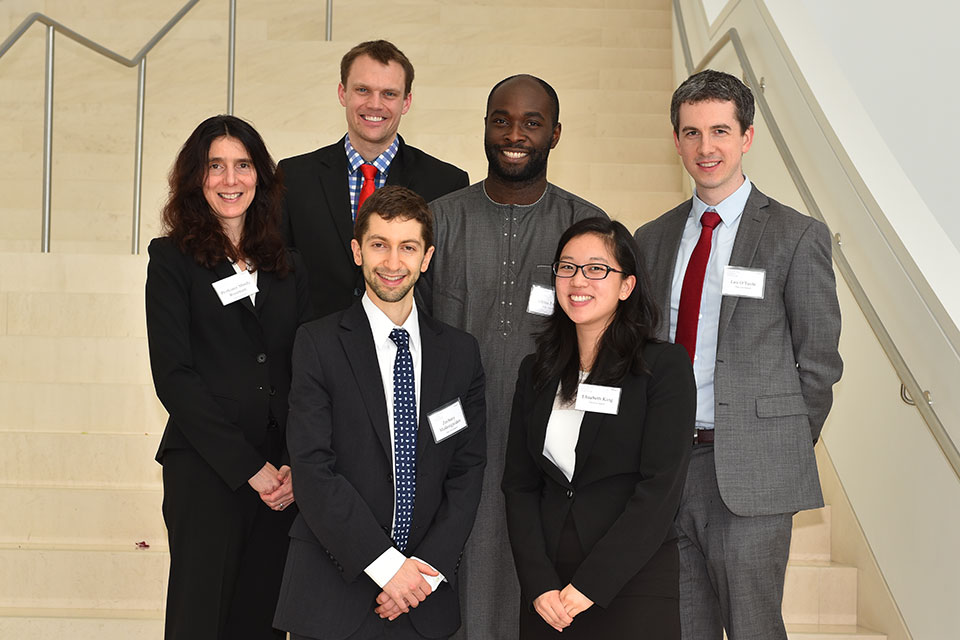 The two-day event, which took place on February 24 and February 25, enabled students to hear from prominent legal professionals and public servants and explore the future of public and private international law.

Kristalina Georgieva, CEO of the World Bank, and Jared Genser, founder of Freedom Now, spoke at the event.

The 56 students are the fifth cohort of Cutler Fellows, the largest, most diverse group to date, collectively representing 26 countries, including Australia, China, Cote d’Ivoire, Ecuador, and Iran, as well as the USA.

Opening the program at the United States Institute of Peace, Genser spoke about the events which led to the creation of Freedom Now, a non-profit organization aiming to free prisoners of conscience around the world.

In the afternoon, the Cutler Fellows Program co-chair, William Burke-White of Penn Law moderated a faculty panel on “The First Year of the Trump Administration: What to Expect?” featuring Rachel Brewster of Duke Law, Paul Stephan of Virginia Law, and Allen Weiner of Stanford Law.

The panelists commented on the apparent retreat from globalism across the world and discussed what they described as the Trump Administration’s “transactional approach” to international law, one that seeks individual gain and discounts the ideological broader good.

The following morning at New York University’s Washington campus, keynote speaker Kristalina Georgieva echoed the faculty panelists’ concern for the dwindling sense of global community. Georgieva, who previously served as European Commissioner for International Cooperation, Humanitarian Aid, and Crisis Response, grew up in post-World War II Communist Bulgaria and commented on how her home country and its neighbors in Europe had learned twice in the past century what happens when nations try to confront problems independently.

“I hope we do not have to learn in the hardest way possible that we are in this world together,” Georgieva said.

She also fielded several questions from the Cutler Fellows, including how to make social welfare more effective and how to facilitate better coordination between various actors working to respond to crises such as the January 2010 earthquake in Haiti.

About the Program
The Salzburg Cutler Fellows Law Program is held by Salzburg Global Seminar under the auspices of the Lloyd N. Cutler Center for the Rule of Law. The annual program collaborates with eleven of the leading U.S. law schools. This year’s program was sponsored by NYU Washington and Arnold & Porter.

The Cutler Fellows Program is named in memory of Lloyd N. Cutler, the Washington “Super Lawyer” who served as White House Counsel to Presidents Carter and Clinton.

Cutler also served as Chair of Salzburg Global Seminar’s Board of Directors for a decade and believed firmly in the power of mentoring young leaders with a commitment to making the world a better place through legal practice and the rule of law.

The Cutler Fellows Program was founded in 2012 by Salzburg Global Seminar to carry forward Lloyd Cutler’s legacy and to empower the next generation of legal professionals.

About Salzburg Global Seminar
Salzburg Global Seminar is an international non-profit organization founded in 1947 with a mission to challenge present and future leaders to solve issues of global concern. Salzburg Global designs multi-year programs to accelerate human, urban and conflict transformation and help organizations and change-makers achieve results at scale. It convenes outstanding people across generations and sectors, aiming to catalyze transformative impact and long-term engagement through alliances, networks and projects on the ground. The work is sustained through strategic partnerships, earned income and philanthropic support.