Douglas NeJaime, the Anne Urowsky Professor of Law at Yale Law School, will give the inaugural Anne Urowsky Lecture at 4:30 p.m. on October 28, 2019 in Room 127 of Sterling Law Building. In his lecture titled “The Constitution of Parenthood,” NeJaime will challenge the conventional assumption that the Constitution protects only biological parent-child relationships and will make an affirmative case for constitutional protection of nonbiological parents. 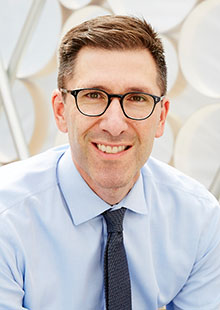 Family law in a growing number of states legally recognizes nonbiological parents in a range of families — including nonmarital families, families headed by same-sex couples, and families formed through assisted reproduction. But in some states, nonbiological parents who have not adopted are treated as legal strangers to their children, according to NeJaime. When these parents turn to the Constitution by asserting a liberty interest in their parent-child relationship, NeJaime has found through his scholarship that they often find no relief. Supreme Court precedents from the 1970s and 1980s involving the rights of unmarried fathers and the status of foster parents have led courts to conclude that only biological parents possess a right to parental recognition protected by the Due Process Clause.

In his lecture, NeJaime will assert that these precedents view parenthood as a social practice — even as they stop short of recognizing a due process interest for nonbiological parents. Those precedents are also decades old and condone forms of inequality that now appear constitutionally suspect. NeJaime will outline how legal and cultural understandings of the family have shifted significantly since these cases were decided. The Supreme Court itself has contributed to the changing legal landscape with its decisions on the constitutional rights of same-sex couples — who ordinarily include nonbiological parents, according to NeJaime.

At the Law School, NeJaime teaches in the areas of family law, legal ethics, law and sexuality, and constitutional law. NeJaime is the coauthor of Cases and Materials on Sexuality, Gender Identity, and the Law (with Carlos Ball, Jane Schacter, and William Rubenstein). His recent scholarship includes “The Nature of Parenthood,” 126 Yale Law Journal 2260 (2017); “Marriage Equality and the New Parenthood,” 129 Harvard Law Review 1185 (2016); and “Conscience Wars: Complicity-Based Conscience Claims in Religion and Politics,” 124 Yale Law Journal 2516 (2015), with Reva Siegel.