Is Your Dishwasher Repairman Packing Heat? The Case For ‘No Carry’ Gun Defaults On Private Property — A Commentary by Ian Ayres ’86 and Spurthi Jonnalagadda THE HILL 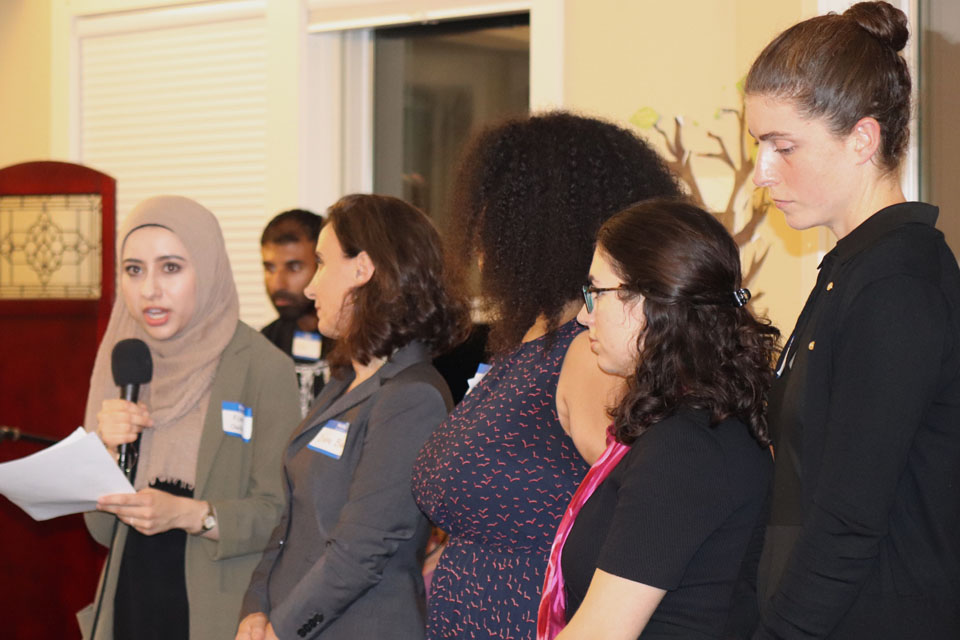 On Tuesday, October 9, 2018, people gathered to mark one year since Sujitno Sajuti entered sanctuary at the Unitarian Universalist Church in Meriden, under threat of deportation by Immigration and Customs Enforcement (ICE). The Immigrant Rights Clinic — a partnership between Yale Law School and the New Haven Legal Assistance Association — is representing Sajuti in his effort to obtain a stay of removal, terminate his immigration proceedings, and secure U nonimmigrant status.

Sajuti, originally from Indonesia, is a beloved member of the West Hartford community who has lived in the United States for decades. The Connecticut Immigrant Rights Alliance (CIRA) brought his case to the attention of the clinic in December 2017, after Sajuti had entered sanctuary. Since then, the clinic has represented Sajuti, in close coordination with CIRA and Unitarian Universalist Church in Meriden.

“Mr. Sajuti has every right to live in the United States, free from the threat of deportation,” said Leanne Gale ’20, a student on Sajuti’s legal team. “Unfortunately, despite his faithful efforts to maintain lawful residence in this country, his rights have been violated repeatedly, leading him to his precarious position today in sanctuary.”

Sajuti came to the United States in 1989 to pursue his education. Following the September 11 attacks, he was one of the thousands of Muslim and Arab immigrants required to register with the government as part of the National Security Entry-Exit Registration System (NSEERS) program. When Sajuti dutifully reported for registration, he was interrogated by immigration officials and denied his right to an attorney. Sajuti’s participation in that program led directly to his deportation proceedings.

After spending 67 days in immigration detention in 2011, Sajuti obtained a stay of removal and received additional stays of removal regularly until 2017. But, in July 2017, Sajuti’s stay of removal request was suddenly denied, and he was ordered to depart from the United States by mid-October. With no way to survive in Indonesia, Sajuti sought sanctuary.

“Our client fell through the cracks of a complex legal system with limited access to affordable, quality legal representation,” said Laura Savarese ’18, another student on the legal team. “While Mr. Sajuti has been eligible for U nonimmigrant status for almost two decades, it was not until he came into contact with CIRA, which referred him to our clinic, that his eligibility was identified. Unfortunately, this is a common story for immigrants in this country who find themselves at the mercy of an often opaque legal system.”

More than 100 members of the local community, including Connecticut State Rep. William Tong and Meriden City Councilor Miguel Castro, came together on October 9 to observe Sajuti’s one year in sanctuary at a ceremony organized by CIRA and the Unitarian Universalist Church in Meriden.

“I hope I still can enjoy some justice while I’m still alive,” said Sajuti during the event. “This is my prayer.”

The event took place in solidarity with the other immigrants in Connecticut who remain in sanctuary, including Nelson Pinos, Malik Naveed bin Rehman, and Zahida Altaf.

Sajuti’s application for U nonimmigrant status, filed with the assistance of the Immigrant Rights Clinic in February 2018, remains pending with U.S. Citizenship and Immigration Services (USCIS). The clinic has also urged USCIS to grant Sajuti deferred action status based on his prima facie eligibility for U nonimmigrant status. The clinic has also filed an application to ICE for a stay of removal, which was denied in July. The clinic filed a motion to reopen Sajuti’s immigration case and a motion to stay his removal with the Hartford Immigration Court in April 2018. Both of those motions were denied. The clinic’s timely appeal of the Immigration Court’s denial of Sajuti’s motion to reopen, as well as a new motion to stay removal, are currently pending before the Board of Immigration of Appeals. The clinic is committed to continue working to vindicate Sajuti’s right to remain in the United States and to return him to his home in West Hartford.