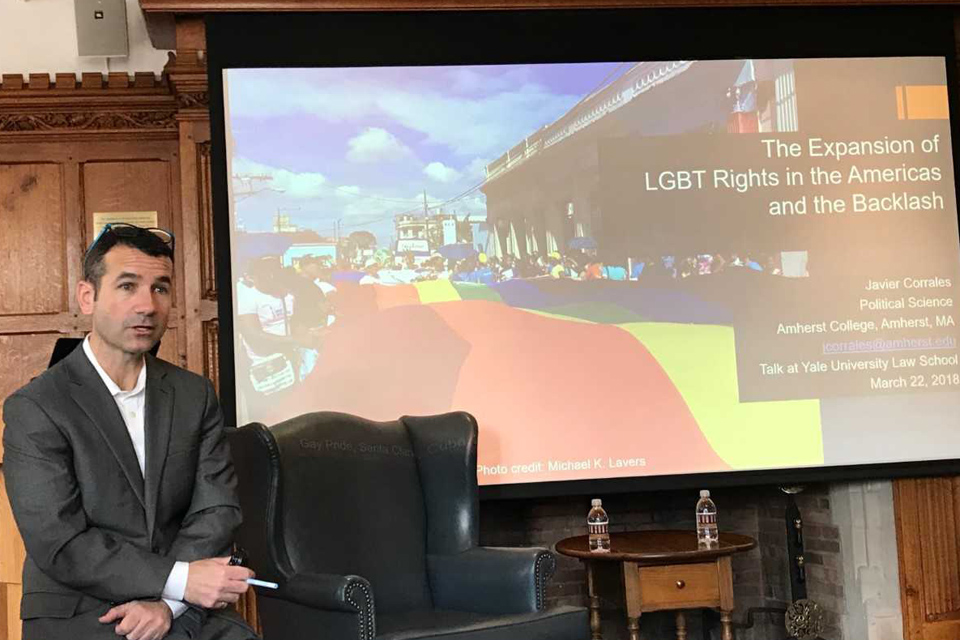 The Schell Center’s March 22, 2018, Human Rights Workshop featured Professor Javier Corrales, who spoke about LGBT activism in Latin America and the challenges it faces. He described the progress Latin American LGBT activists have achieved in the last few decades as “amazing, yet uneven.”

Corrales is the Dwight D. Morrow 1895 Professor of Political Science at Amherst College. He began his talk by describing the expansion of legal rights in Latin America, which has been spurred by a series of pro-LGBT court rulings and policies that have banned discrimination, legalized same-sex marriage, and provided health services to LGBT individuals.

During the talk, Corrales attributed much of this recent success to the sophisticated strategies of pro-LGBT social movements. For instance, LGBT groups have formed strategic alliances with the private sector to lobby for progressive policies. They have also convinced other human rights organizations to embrace LGBT issues and to frame homophobia as a human rights abuse. Corrales posited that employing human rights language has particular resonance in Latin American countries where human rights movements were central to resisting authoritarian regimes, such as Argentina, which legalized same-sex marriage in 2010. Framing LGBT issues in human rights terms is a potent strategy in places where people are “socialized to believe in the importance of upholding human rights,” he said.

However, as Corrales noted, there is “trouble ahead for LGBT rights.” Public opinion has not yet caught up with the legal progress made in Latin America. Many LGBT individuals live in hostile environments, and there is a growing backlash against LGBT rights, much of which comes from evangelicals. As Corrales explained, evangelicals in Latin America are staunchly opposed to LGBT rights and now make up around 20 percent of the population in some Latin American countries and are close to the majority in some Central American nations.

“They have no match in the region in terms of power,” said Corrales.

He described evangelicalism as a social movement, and explained that evangelicals have already had a significant impact on politics: they helped elect an evangelical pastor as mayor of Rio de Janeiro; sponsored a political campaign that helped defeat the 2016 referendum on Colombia’s peace agreement with the FARC; and are supporting the frontrunner in Costa Rica’s presidential election — the evangelical pastor Fabricio Alvarado Muñoz, who is openly opposed to LGBT rights.

A third reason for evangelicals’ success is that they have been able to articulate their cause in a way that appeals to people beyond the devout members of their own communities. As Corrales explained, one concept that evangelicals and others have seized upon is “gender ideology”: Latin American conservatives have effectively deployed this term to portray reforms advocated by LGBT and feminist activists as imposed beliefs that aim to destroy traditional Christian family structures and values. Corrales suggested that LGBT and other gender rights activists could counter these arguments and the strength of evangelicals by framing homophobia and sexism as imported beliefs.

Corrales concluded that the current backlash to LGBT rights means that LGBT activists must fight even harder to protect the progress they have made and ensure that their allies consider it a priority to uphold LGBT rights.