Laurel E. Fletcher On Confronting Berkeley Law’s Past Through Art 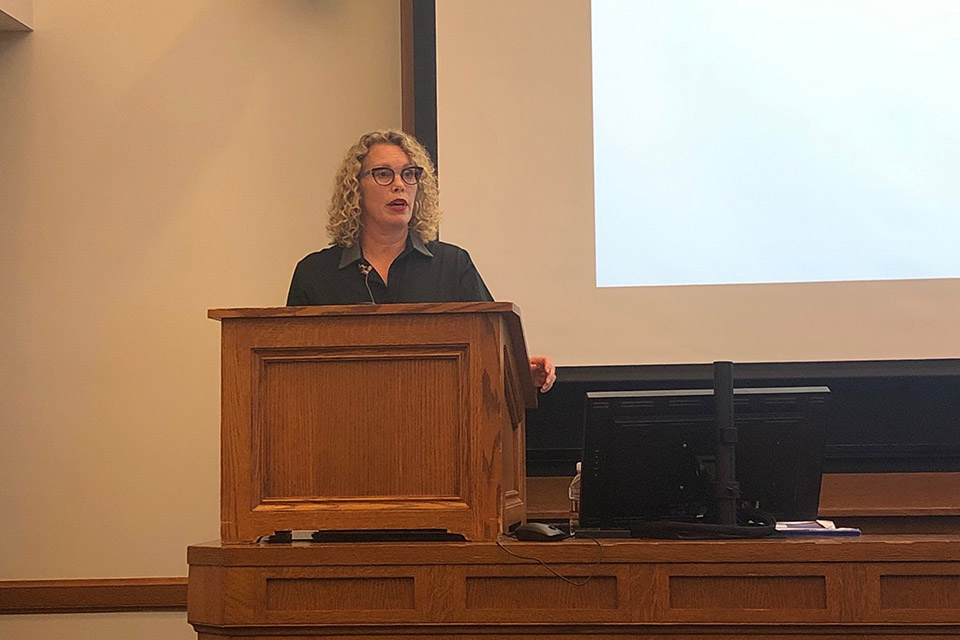 Outside the Dean’s office at Berkeley Law hangs a series of graphic paintings by Colombian artist Fernando Botero. Figures loom across the canvases, contorted into painful shapes, often bound, bloodied, and bruised. In one, a dog attacks a man who appears to cry out in agony. Another shows a blindfolded man kicked by a captor’s boot. The paintings, which depict the notorious prisoner abuse at Abu Ghraib, hang there to remind passersby of the university’s role in the U.S. torture of detainees during the War on Terror.

Now, many at Berkeley Law are pressuring the school’s new dean to take the paintings down. On April 16, 2019, U.C. Berkeley Professor of Law Laurel E. Fletcher spoke at the Schell Center about why she thought the paintings should stay and how to understand their role in a more nuanced way.

Fletcher began her presentation by explaining the relationship of Berkeley Law to the use of torture in U.S. counterterrorism efforts. In 2004, she recalled, The New Yorker published photos of terrorist suspects being tortured at Abu Ghraib, and soon after, the memos that had been used to justify these abuses were leaked. These memos were coauthored by John Yoo, a tenured professor at Berkeley Law.

“The abuses perpetrated during the War on Terror [make it] a shameful period of our history,” Fletcher said, and Yoo became the most recognizable lawyer who authorized those abuses. In spite of repeated calls for the university to sanction or fire Professor Yoo, then-dean Christopher Edley, Jr. stuck to the academic regulations that only allow for such measures when a faculty member has been convicted of a crime.

Edley did, however, decide to display the Botero paintings depicting the torture at Abu Ghraib outside his office. According to Fletcher, “Botero wanted to provide a moral narrative of the descent of the United States. He painted so the world would not forget the violence perpetrated by the United States at Abu Ghraib.”

In putting the Botero paintings at Berkeley Law, Fletcher argued, the university did more than just remember the violence. It also created opportunities to interpret the paintings and their placement in different ways. One interpretation she raised was what she called a “moral narrative” about the Boteros: that the paintings “operate to create a universal narrative of the relationship of law to torture.” She rejected the framing of that relationship as a completely oppositional one. “The paintings,” she said, “can be understood not as the absence of law but as its perversion.”

To Fletcher, the Botero paintings also “symbolize the law school’s commitment to two values in tension: the university as a space where all ideas can circulate and the repudiation of torture and those who condone it.” She described the key role of art in helping balance academic freedom and the need for accountability.

In spite of the symbolic power of the paintings, Fletcher noted, many believe that the works “belong in the past.” Fletcher argued otherwise. As Berkeley Law considers whether to keep the Boteros, Fletcher said, it is useful to consider what she called “public memory,” a process of remembering and relating to the past that implicates each person who sees the paintings. She suggested that this practice “shifts the framing from Yoo’s personal involvement in the torture memos to raising questions of institutional memories. It’s about the meaning of our relationship to law, and how we exercise our agency as members of this institution.”

Fletcher concluded by stressing that art can be a unique tool for accountability, rather than a consolation prize for legal sanction. “Capable of generating multiple meanings,” art, Fletcher said, “goes where law cannot.”