As a Liman Fellow in her second year at the Roderick & Solange MacArthur Justice Center in Washington, D.C., Megha Ram ’18 challenges detention conditions that harm the health, safety, and human dignity of people behind bars. She provides this account of one her cases. An earlier version appears in the 2020 Liman Center Reports.

Prisons, jails, and immigration detention facilities are violent. They do not provide necessary medical care. They are humiliating and degrading. And when detained people bring lawsuits to improve conditions or recover compensation for harms they have suffered, they must satisfy impossibly high legal standards to succeed. My fellowship project is focused on changing these legal standards so that detained people can more easily vindicate their rights. 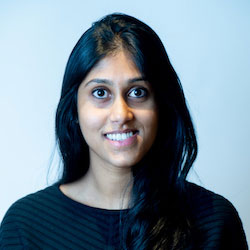 The first case I took on during my fellowship challenged poor medical care at the Pittsburg County Jail. My client had developed a painful and dangerous medical condition while detained. He was in severe pain and pleaded with corrections officers for three days to help him. But they did not take him to the nurse or take any steps to provide the emergency medical care that he needed. On the morning of the fourth day, another corrections officer finally took him to see the nurse. After examining him, the nurse immediately sent him to the emergency room. There, he was told he needed to see a specialist — urgently — at a different hospital. But instead of sending him to the specialist, the officers brought him back to the jail, made him fill out paperwork, and then released him — leaving him to find his own way to the hospital. By the time he finally got to the specialist, not only had he been in serious pain for days, but it was too late to completely treat his condition and he suffered permanent damage. He brought suit against four individual officers, alleging that they were deliberately indifferent to his medical needs. He also brought suit against Pittsburg County, alleging that it did not adequately train its staff and that it had policies that prevented him from reaching the second hospital in a timely manner.

"By the time [the client] finally got to the specialist, not only had he been in serious pain for days, but it was too late to completely treat his condition and he suffered permanent damage." — Megha Ram ’18

The district court awarded the corrections officers qualified immunity even though it determined that a reasonable juror could find most of them deliberately indifferent to our client’s medical needs. It also rejected our client’s claims against the County. I entered the case as appellate counsel when I saw this unjust decision blocking all these claims from going to trial. After appellate briefing and oral argument, the Tenth Circuit Court of Appeals reversed the decision of the district court (as explained in this news story) and ruled that the case could go forward to trial. It reversed qualified immunity as to three of the four individual defendants and reversed summary judgment on both claims against the County. I am thrilled that our client will finally have the opportunity to seek redress for the mistreatment he suffered.

My fellowship project is specifically focused on litigating conditions cases, like this case, at the appellate level because such cases have the potential to change legal standards not only for our clients, but also for other detained people in the same jurisdiction. I am hopeful that the decision in this case — with its positive rulings on qualified immunity and municipal liability — will allow other people who are denied medical care in the Tenth Circuit to hold their jailers accountable for mistreatment and incentivize jails to provide better medical care.