Fighting the next recession in the United States with law and regulation, not just fiscal and monetary policies Washington Center for Equitable Growth 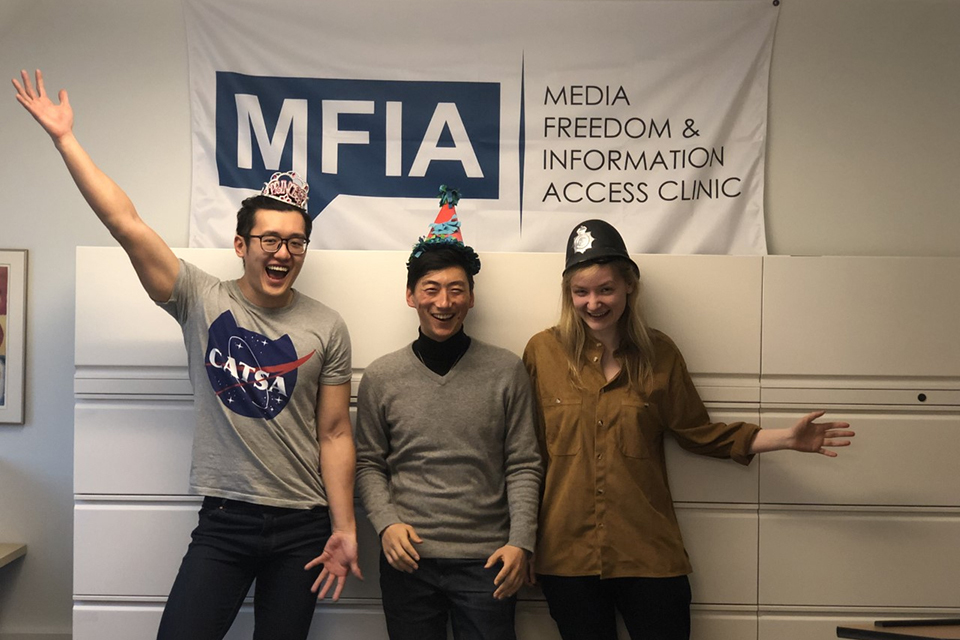 When Catherine Martinez ’19 found herself reciting oral argument before a federal appellate court this past year as a student in the Media Freedom and Information Access Clinic (MFIA), she knew her time at the Law School had been special.

This wasn’t Martinez’s first time speaking in a courtroom setting as a student. She had already argued for a MFIA client before a Connecticut state commission years before. By the time she reached the Eleventh Circuit Court of Appeals, Martinez already had more experience than some first-year associates at big firms.

As one of this year’s outgoing student directors, Martinez recounts her time with the MFIA Clinic as life changing.

“MFIA convinced me that I made the right decision to go to law school and that being a lawyer was the right thing for me,” Martinez says. “It gave me so many opportunities to gain real world experience working with clients in the field, while many students in clinics get none.”

“MFIA was one of the most valuable things I did in law school,” Perlin says. “I learned how to litigate a case from start to finish; filing a complaint, talking to opposing counsel, writing an appellate brief, preparing oral argument…we worked on cases in all stages of litigation.”

MFIA also does its own appellate work, which isn’t true of many legal clinics.

Perlin describes the breadth of experiences that she now has under her belt thanks to the Clinic as invaluable contributions to her confidence levels as she moves on from law school.

“In the [MFIA] Clinic, you learn to manage relationships with co-counsel, outside counsel, opposing counsel, the judge, and more,” she says. “But most importantly, the [MFIA] staff attorneys are amazing mentors who want you to learn from cases you’re interested in.”

Perlin was most interested in government accountability, transparency, and national security, all areas of litigation in which the Clinic specializes. Martinez was determined to work on First Amendment-related issues, another focus of the Clinic. Both were placed on teams with caseloads closely in line with their future goals, something the Clinic strives to do for all its student members.

As one of the outgoing student directors, Martinez she says she found it rewarding to learn from the best on such a large stage. She and Perlin both enjoyed finding ways to develop useful legal skills through tasks at the Clinic, like writing briefs and complaints, preparing arguments and court filings, conducting legal research, client advocacy, and more.

“MFIA allows you to do substantive legal work as a student — it’s a great complement and supplement to the theory you get in class,” Martinez says. “It also meant a lot to me in terms of my personal development — getting that opportunity as a student [to argue against the state of Alabama at the Eleventh Circuit Court of Appeals] wouldn’t have happened at another clinic.”

According to Wang, “there are many associates at big-time law firms who would kill to argue at federal appellate court or federal district court but won’t get the chance to.” Wang considers MFIA the ideal clinical mentoring experience. “Our supervisors are always there to provide guidance and support, but they also really value their role in helping us come into our own.”

Guo takes it one step further. “As students, we get to participate in the conversation of what the First Amendment should look like in the 21st century,” Guo says. “You can do that in a law review article or you can do that in an actual court. We are helping to move the law in a very real way, and the Clinic gives us all a voice in that every step of the way.”

Wang values being included in conversations around cases for which many other clinics wouldn’t have students in the room.

“In MFIA, students get to be involved in shaping the overall legal framing of our arguments,” he says, “which really makes me feel a sense of ownership of the cases. Everything feels so much bigger while you’re in MFIA than just being a student in law school.”

Guo echoes the sentiment. “We’re often suing or negotiating with so many government agencies at once, it’s crazy. Writing summary judgment briefs, doing pre-discover work, contacting expert witnesses, learning about litigation strategy, deciding when to file agencies — these are skills I’ll use for decades that you don’t get from classrooms. This is the work that people go to law school to do. It’s the work of a lawyer.”

For Windemuth, the Clinic has been equally formative, inspiring her to pursue a career in media law down the road. Windemuth was part of the first group of students working on the DocProject, a new venture where MFIA advises independent documentary filmmakers on the legal issues surrounding their work.

“The fact that we have access to this caliber of clinical faculty at MFIA, like Dave [Schulz ’78, MFIA’s co-director] and Sandy [Baron, MFIA’s DocProject Advisor] — people who have been doing this work for decades — makes MFIA students really lucky,” says Windemuth. “It’s been my most meaningful experience in law school.”

Guo describes his time so far at the Clinic in similar terms. “MFIA has been one of the greatest experiences anyone could get at law school,” he says. “You don’t just come out of the Clinic knowing the mechanics of the law — you get a behind the scenes look into how lawyers think and what they think about. You learn legal culture. Once you understand this, you’re way ahead of the game in figuring out how the world actually works.”

Q & A: Chris Ewell ’22 on Protecting Fisheries Observers on the High Seas