In his new book, Origins of Order: Project and System in the American Legal Imagination, Robert W. Winner Professor of Law and the Humanities Paul W. Kahn ’80 examines how two different concepts of order — project and order — shape the American social imagination. 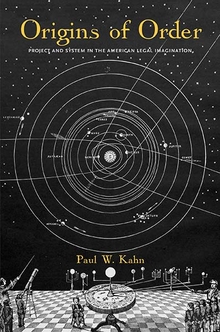 In a project, order is the result of an intentional act; in a system, order is immanent. In the former, order is constructed according to a plan or idea; in the latter, order is discovered in the world. These competing perspectives echo the great theological debates of the medieval era about the nature of God’s relationship to the world. Is the order of the world to be accounted for by God’s intention or does the world display an immanent order of reason? By 1776, these concepts of project and system were being applied to social phenomena. That was the year of the Declaration of Independence, which declared politics to be a project of the people. It was also the year of Adam Smith’s Wealth of Nations, which described the economy as a system following an immanent order that was the result of no one’s intention. From then on, scholars and judges have been arguing whether society should be approached as project or system.

Kahn uses these two concepts to explore the American legal tradition. He shows that the revolutionary tradition of project carries forward in America law through the middle of the 19th century. The concept of project provides an organizing idea for the emerging constitutionalism and the practice of judicial review. Around the time of the Civil War, however, the concept of system becomes the organizing principle of the legal order. The written constitution – the product of a project – is displaced from attention by the “unwritten constitution,” which is the spontaneous order that develops as the law of a free people. “System informs the growth of the social sciences and animates the birth of the new American law school under Christopher Langdell at Harvard,” Kahn said. “By the end of the century, we lose the idea that the Revolutionary project represented a break with British law, as constitutionalism and common law converge as similar systems.”

Kahn’s philosophical inquiry into project and system suggests a range of continuing investigations into contemporary legal issues, including the nature of international law, the reasons for jurisprudential disagreement, the nature of criminal responsibility, the competition between interpretive approaches, and the grounds of the regulatory state. Kahn is pursuing many of these subjects through collaborations with young scholars throughout the world.

Paul Kahn teaches in the areas of constitutional law and theory, international law, cultural theory, and philosophy. Before coming to Yale in 1985, he clerked for Justice White in the United States Supreme Court and practiced law in Washington, D.C., during which time he was on the legal team representing Nicaragua before the International Court of Justice. He is the author of Legitimacy and History: Self-Government in American Constitutional Theory; The Reign of Law: Marbury v. Madison and the Construction of America; The Cultural Study of Law: Reconstructing Legal Scholarship; Law and Love: The Trials of King Lear; Putting Liberalism in its Place; Out of Eden: Adam and Eve and the Problem of Evil; Sacred Violence: Torture, Terror, Sovereignty; Finding Ourselves at the Movies: Philosophy for a New Generation; Political Theology: Four New Chapters on the Concept of Sovereignty; and Making the Case: The Art of the Judicial Opinion.