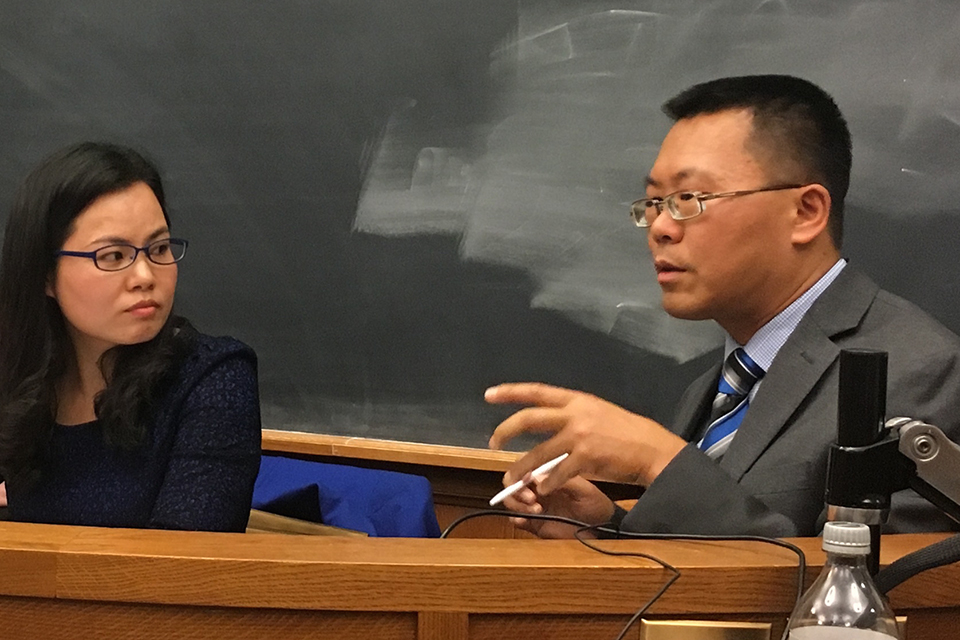 On February 28, 2017, two former visiting scholars returned to Yale Law School: Lu Miaoqing  and Teng Biao, each eminent Chinese lawyers with a wealth of experience navigating the challenging and often dangerous practice of human rights advocacy in China. China’s authoritarian government and culture of suspicion and animosity toward human rights present unique obstacles for lawyers engaged in advocacy work. In the panel “Human Rights Lawyering China,” Lu and Teng expanded on these obstacles and detailed their differing approaches to overcoming them.

Lu is generally considered to be a public interest lawyer, though she shies away from such labels––especially the title “human rights lawyer,” which carries significant negative connotations among the Chinese public. She worries (with reason) that taking ownership of the phrase would prevent her from doing the kind of work she wants to. Lu’s cases have largely concerned women’s rights––she has worked on issues ranging from forced sterilization to gender discrimination in employment. In some of her cases she has made frustratingly little headway, especially those that concern abuses by the government. However, she has also achieved significant successes. She has won multiple major cases, including an employment discrimination case that was named one of the top 10 public interest cases in China of 2013. In addition, she noted, even the cases she could not bring to court drew attention to the issues for which she advocates.

Teng, on the other hand, takes a more confrontational approach; he embraces the term “human rights lawyer” in spite and because of its radical implications. He has worked on a variety of extremely sensitive cases, for example, on behalf of dissidents and those wrongly convicted and sentenced to death. Frequently, in spite of airtight arguments and overwhelming evidence, he has lost his cases; these verdicts, he said, had been decided before the trials began. Teng espoused a strong belief in the principles of freedom and democracy, and disapproval of international organizations’ self-censorship and cooperation with the Chinese government in the name of effecting change within the system. His more drastic approach led to him being banned from teaching, disbarred, placed under house arrest, kidnapped three times, and tortured.

The challenges of doing advocacy work under a government hostile to human rights issues, Lu pointed out, are not unique to China; she argued that American advocates under the Trump administration in particular have a lot to learn from their Chinese counterparts. Human rights lawyers in countries across the globe can draw on both Lu and Teng’s strategies––whether incremental or confrontational––and the capacity they described to find hope in their efforts.