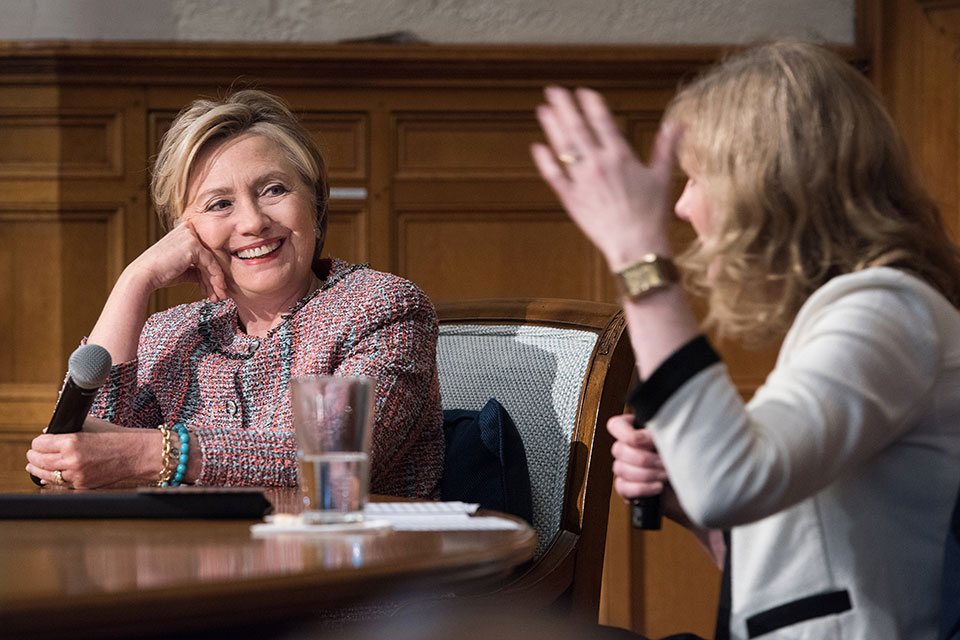 Secretary Hillary Rodham Clinton ’73 returned to Yale Law School on October 25, 2017, to talk about her book “What Happened,” during a lively conversation with Dean Heather Gerken.

In front of a packed auditorium of more than 500 students, faculty, and other members of the Yale Community, Secretary Clinton gave insight into the 2016 election and emphasized how critical it is for lawyers to protect the rule of law during this turbulent time in our nation’s history.

Watch a video of the conversation.

During the introduction, Gerken described Clinton’s distinguished career in public service, calling her “the people’s choice” for President — a nod to Clinton’s large margin of victory in the 2016 election popular vote.

Gerken noted how Clinton came to the Law School during a time when the “world was falling apart” and emerged as someone who was “determined to make a difference.”

During the conversation, Clinton described the agonizing process that went into writing her book and how she hoped it would provide solace to the millions of people who voted for the more hopeful, inclusive vision of America that she advocated for on the campaign trail.

One of the goals of the book, Clinton said, was to examine the unique set of circumstances that led to her defeat, from Russian interference in the election, to sexism in politics, to the role of the media in covering the first reality television candidate.

“There are certain lessons in [the book] that I really hope people will take away with them,” said Clinton. “Because it’s not just about what happened, it’s what we need to do to prevent it from happening again.”

Clinton also raised an alarm at the way fact and fiction have become blurred by an Administration that she said blatantly presents falsehoods and distorts reality.

“There is no such thing as an alternative fact,” said Clinton. “Those of you in this room, at this great law school and University, have a real responsibility to figure out how you are going to demand that we make decisions based on facts, evidence, and reason.”

Clinton and Gerken also discussed the “endemic sexism” that persists in our society and how critical it is that more women step into leadership roles.
“The only way we are going to get sexism out of politics is to get more women into politics,” said Clinton. “There is still a very powerful message that is embedded in our human DNA about what is appropriate for a woman in a public role.”

Clinton described the challenges women will face in politics, offering advice to those thinking about entering the arena.

“You are going to be criticized and you have to learn how to take criticism seriously but not personally,” she said.

Gerken asked Clinton what she saw as her role in politics after such an unprecedented national election.

“Well, look, if I had lost to a normal Republican, I would have been really disappointed, but I would not have woken up every morning for many months with a big knot in my stomach,” said Clinton.

“I have fought against powerful interests for many, many years,” she continued. “I am somebody who believes that our system makes progress over time and you have to stay with it.”

She noted that while she had stayed quiet immediately after the election, the assault on our core democratic values has proved too much to ignore. Acknowledging that her critics want her to stay silent, she defiantly told the audience that simply was not going to happen.

“Guess what, they are not going to get their fondest wishes,” said Clinton, prompting an eruption of applause. “I am going to continue to speak out and speak up and make the case.”

Finally, Clinton told the room of law students and lawyers that they too cannot back down, no matter how tough the fight seems.

“We absolutely need lawyers committed to rule of law and the profession as much now as we ever have,” she said. “I’m very grateful that I went to Yale Law School and that I learned so much here that I carried with me when I left.”

Clinton urged students to engage in the clinical experiences at Yale, telling them to find an issue they are passionate about and to stick with it.

“The more you can immerse yourself in the clinical experiences at Yale, the more prepared you will be to make a decision about what both feeds your heart and your mind when you leave,” Clinton said.

Clinton is the first woman to receive the nomination for President by a major party and won the popular vote by nearly 3 million votes. Prior to running for President, she served for four years as Secretary of State under President Barack Obama. Clinton also served as U.S. Senator for New York and as U.S. first lady during the presidency of her husband, Bill Clinton ’73. She previously served as partner in the Rose Law Firm in Little Rock, Arkansas.