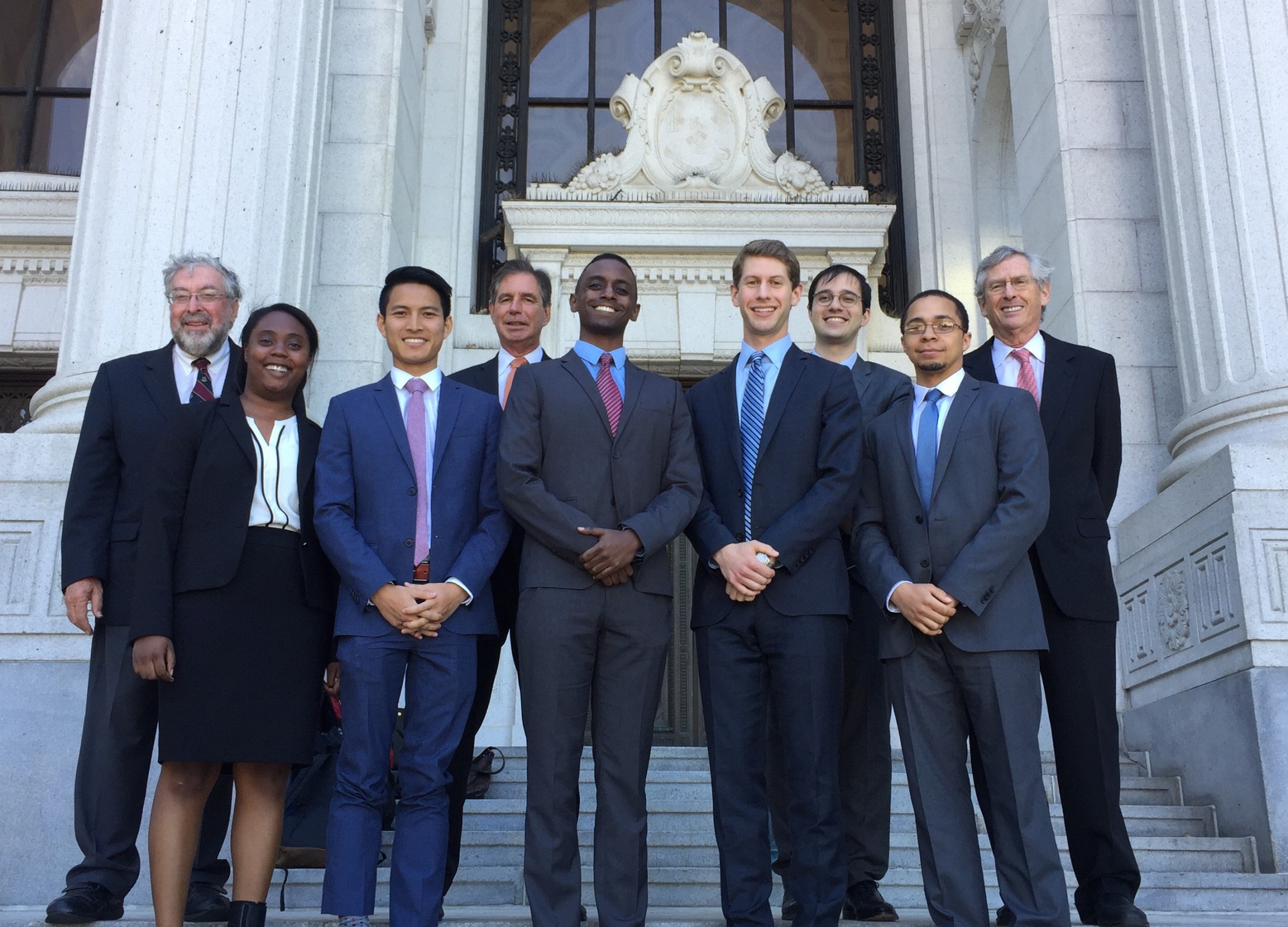 Students and supervisors from the Education Adequacy Project appeared before the Connecticut Supreme Court on September 28, 2017.

Students and faculty from the Education Adequacy Project (EAP) appeared before the Connecticut Supreme Court today to defend the clinic’s historic 2016 trial court victory in CCJEF v. Rell, which found that the state was “defaulting on its constitutional duty” to educate its most disadvantaged children.

“Our clinic’s mission is simple,” said Matt Nguyen ’19, one of the clinic’s student directors. “We fight tirelessly for the high-quality, public education that each and every child deserves.”

EAP has represented the Connecticut Coalition for Justice in Education Funding (CCJEF) since drafting the coalition’s bylaws in 2003 and filing the original CCJEF complaint in 2005. The coalition is composed of parents, teachers, students, and local education leaders who say that Connecticut’s irrational and inequitable funding system deprives public schoolchildren of their fundamental right to an adequate education.

During the 2016 trial, the coalition pointed to the academic achievement gap between the state’s poorest children and its most affluent: by some measures, the very worst in the nation. On recent state math tests, fewer than one-in-ten Bridgeport students earned scores indicating college or career readiness, a result replicated across other low-wealth districts, according to the clinic.

“There are districts where, year after year, the overwhelming majority of students fall short of state education standards,” said Brandon Levin ’20, another EAP student director. “Our case aims to remedy the resource disparities driving these outcomes and give voice to all students.”

When asked whether the state had a responsibility to provide disadvantaged youth with enough educational resources to mitigate the difficulties they faced outside of school, Moodhe replied: “Schools are there to educate children regardless of how they show up. All children can be educated.”

“The outcome of CCJEF v. Rell will determine whether the Connecticut Constitution truly champions education equity and adequacy for all K-12 public school students in our state,” Finley said.

This is the second time the Court has heard oral arguments in the clinic’s case. Back in 2010, the Court held in a 4-3 decision that the Connecticut Constitution guarantees an enforceable right to adequate educational opportunities.

Writing for the plurality at the time, Justice Flemming Norcott concluded, “The Connecticut Constitution guarantees Connecticut’s public school students educational standards and resources suitable to participate in democratic institutions, and to prepare them to attain productive employment and otherwise contribute to the state’s economy, or to progress on to higher education.”

“Through our briefing and oral arguments here today, we hope to reaffirm the importance of an adequate education for underserved children, families, and communities as it was first recognized by the plurality in 2010,” said clinic student director Sesenu Woldemariam ’19.