Using the Law to Uplift Families 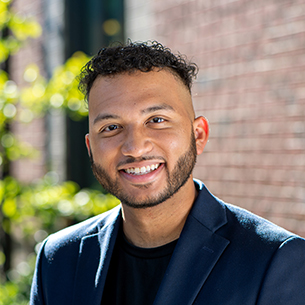 Alphonse Simon ’24 has experienced the law as a double-edged sword. When he was an infant, his father was incarcerated for a crime that he alleges he did not commit. As a result, Simon and his sister were raised in Oakland, California, by their single mother, who supported the family on food stamps and other social welfare programs. When he graduated college, Simon said, “I felt a calling to give back — to support policies that help families like mine and challenge the policies that harm families like mine.”

After college, Simon was initially drawn to work at a large policy research organization. But while others in the organization seemed to find specialized policy interests, Simon could not find his niche. He decided that a law degree would enable him to become a generalist while also helping families like his. “I chose Yale Law School,” he said, “because I knew it would be the best place to spend three years exploring ideas, engaging with faculty, and understanding how to use the law for social good.”

Simon highlighted his work with the San Francisco Affirmative Litigation Project (SFALP) — a clinic that works with the San Francisco City Attorney’s office on innovative public interest lawsuits — as one of his most meaningful law school experiences. Simon has been part of SFALP’s Government Litigation team, which has helped defend the City’s progressive legislation; this semester, he is working on an environmental law case.

As a Bay Area native, Simon was originally drawn to the clinic because of his connection to San Francisco and interest in the work of the San Francisco City Attorney’s Office.

Simon attended the City College of San Francisco (CCSF) after high school. During his first year there, CCSF went through an accreditation crisis that caused anxiety for Simon and his fellow students. After his first year, he said, suddenly the accreditation crisis was resolved. He was able to take the courses he needed and he soon transferred to the University of California, Berkeley, where he became the first member of his family to graduate from college.

But once he arrived at Yale Law School, Simon found that he already had a personal connection to the clinic that he wasn’t aware of: CCSF’s accreditation crisis had been solved by the San Francisco City Attorney’s Office and SFALP clinic students.

“I knew at that moment that I wanted to be part of the clinic and to help enact the kind of change that drastically altered the course of my life,” Simon said.

The Hurst Horizon Scholarship awarded to Simon for the 2022–23 academic year has given him a new freedom to follow his passions at Yale Law School and afterward.

“Entering law school, I grappled with the choice between going into the private sector and helping my family financially or going into the public sector and helping families like mine through policy change,” he said. “This program has eliminated the distinction between these two choices, and I feel significantly more autonomous in deciding the direction of my legal career.”

After Law School, Simon hopes to use his law degree to jump between private and public practice — from securities law and antitrust to affirmative litigation — perhaps by starting his own law firm in the Bay Area.

Simon said that the Hurst Horizon Scholarship Program has created a community of students who share similar challenges and experiences, in addition to providing greater financial freedom.

And the support will have a ripple effect on their families. Before he received the scholarship, he planned to use his summer earnings and first year’s salary to lower his debt burden. Now, he plans help his mother with her expenses.

“Beyond the monetary value, the Hurst Horizon Scholarship has proven to me that the YLS faculty and administration recognize that certain students not only lack a safety net from their families, but in many ways are the safety net for their families,” he said.