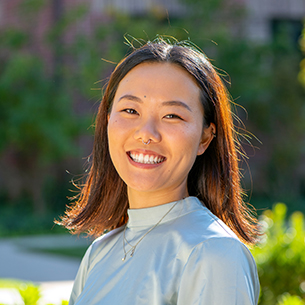 Growing up between the United States and Japan, Chisato Kimura ’25 experienced the U.S. immigration system in ways that made her realize how confusing and anxiety-producing it is for so many of the people whose lives are bound by its regulations.

“I vividly recall one time at an airport, when I was about eight or nine, when my mother and I were held for over seven hours and thought that we might be turned away and forced to leave the U.S.,” Kimura remembered. This was one of many times when they were held in airports, customs stations, or on trains at border crossings because of a misunderstanding or issues with their paperwork.

When Kimura was starting college, her mother found out that she was unable to obtain a U.S. work visa as a special education teacher and was forced to leave the country in the span of less than two months. Kimura and her mother didn’t know what, if any, options they had for appealing the decision, and without access to the financial resources to hire an immigration attorney, her mother was forced to leave the country. Kimura began to dream of attending law school to be able to assist immigrant families like hers, and other marginalized communities.

At Mount Holyoke College, Kimura’s interest in law and advocacy deepened as an international relations major.

“As I began learning more about international law and human rights frameworks, I realized that they could be powerful advocacy tools to ensure people’s rights, regardless of their country of citizenship, gender, socioeconomic status, or any other differentiating factors,” she said.

She wrote her thesis on misconduct by United Nations peacekeepers in the communities to which they’re deployed. Her research helped her realize the complexities of international law, issues of jurisdiction, and the need for progress in the field of human rights law and protections, including protection of vulnerable communities and individuals from institutions. Kimura felt that going to law school was the best way to dive deeper into these fields of study, and that Yale Law School provided the best learning environment and opportunities to continue exploring her interests.

While she dreamed of attending a top school and eventually practicing human rights law, Kimura said she was “terrified” that the debt she would incur wouldn’t allow her to follow the path she wanted.

“Getting into Yale Law School was completely life-changing and allowed me to start dreaming about my future, but getting the call from Dean Ingber that I had received the Hurst Horizon Scholarship turned those dreams into tangible realities for me,” Kimura said. For the first time in her life, she said, she doesn’t have to choose between financial security and her passion for human rights advocacy.

“The Hurst Horizon Scholarship goes beyond the financial support,” she added. “Getting to know the other people in the program and having community events has made me feel like I belong at Yale, and it’s incredible that I get to be a part of a program and part of an institution that is intentionally creating spaces and opportunities for low-income students.”

So far, Kimura’s first term is everything she had hoped it would be. “Almost every morning, as I walk up the steps of Sterling Law Building, I’m still in awe that I get to learn from such a brilliant and diverse class of students and the most incredible professors,” she said. Kimura’s highlights include joining the Lowenstein Human Rights Project — where she is working with an organization in Yemen, called Mwatana, on an accountability and reparations project — and her 1L small group, which she has experienced as a source of support and community.

After she graduates, Kimura hopes to spend some time working with NGOs and international organizations, working on advocacy issues at the nexus of human rights and gender equality. She’s also interested in becoming an international human rights law professor.

“I hope to one day continue to push the field of international human rights law forward academically and to have an opportunity to work with the next generations of human rights advocates,” she explained. “I used to think that these were far-fetched dreams, but by coming to YLS through the Hurst Horizon program, I’ve been given life-changing access to an incredible legal education, support, and the resources necessary to turn my dreams into something I can take realistic steps towards achieving.”