The Evolution of a Leader 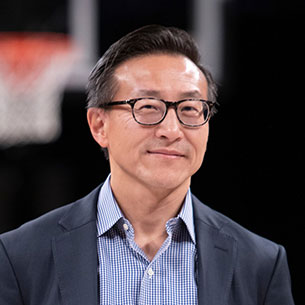 “I was never ‘the number one guy’ in school or playing sports, or working in a company,” said Tsai.

Yet, over the course of his career, Tsai has found extraordinary success and paid it forward to others to help develop new leaders around him. The key to that success has been rooted in an understanding that leadership can be taught and learned and how critical it is to build up the people around you.

“I create a culture for others to succeed by getting out of the way and letting people I’ve hired do their job,” said Tsai. “As a leader, our job is to support and provide them with the best resources. To create a productive environment, the leader needs to be the ‘lowest maintenance’ person in the company. That way, the team can focus on what they do best instead of worrying about pleasing you.”

Tsai, who is a Co-founder and Executive Vice Chairman of Alibaba Group, a global Internet technology company based in China, has learned invaluable lessons about collaborating with teams, communicating with stakeholders, and inspiring people in his 22 years with the company – all leadership skills that he said can be developed over time through hard work.

For Tsai, the most important leadership value is having the humility to hire people who are smarter than you are, support them to be successful, and give them credit. “Self-awareness is equally important. You have to have self-awareness to listen more and talk less, absorb and reflect on criticism, and correct your own mistakes,” said Tsai.

The importance of building strong teams was a lesson he learned early on at Yale Law School.

“With so many brilliant classmates, YLS taught me that I was not going to be the smartest person in the room, so I should support those who can give the team the best chance to succeed,” said Tsai.

If Tsai could give leadership advice to his former law school self, he would say, “Go find a job where you work with people from all walks of life — people with different educational levels, experiences, and perspectives. A homogeneous workforce is not the best environment to train leaders. Also, put yourself in a role where you are exposed to public scrutiny. Transparency is the best training ground for leadership.”

Prior to founding Alibaba Group, Tsai practiced tax law as an associate with Sullivan & Cromwell LLP. He was responsible for Asian private equity investments for Investor AB of Sweden’s Wallenberg family.

Tsai serves on the boards of directors of Alibaba Group and its financial services affiliate, Ant Group.

He is Governor of the Brooklyn Nets in the National Basketball Association and New York Liberty in the Women’s National Basketball Association and is Chairman of the teams’ home arena Barclays Center in Brooklyn, New York. He owns two professional indoor lacrosse teams, based in San Diego and Las Vegas, in the National Lacrosse League. He is also an investor in the Premier Lacrosse League and Los Angeles FC of Major League Soccer.

Tsai is a Founding Board Member of The Asian American Foundation (TAAF), a nonprofit launched in 2021 that provides resources to Asian American Pacific Islander (AAPI) communities to mobilize against hate and discrimination and build the infrastructure to improve AAPI advocacy, power, and representation.

In 2017, Tsai received from Yale the George H.W. Bush ‘48 Lifetime of Leadership Award which honors alumni athletes for significant leadership contributions in their respective fields of work.

Through the Joe and Clara Tsai Foundation, Tsai and his wife Clara Wu Tsai are active philanthropists supporting initiatives in education, research, criminal justice reform, economic mobility, the arts and humanitarian relief during the COVID-19 pandemic. The Tsais are also Founders of the newly launched Tsai Leadership Program at Yale Law School.