The Right Road Is Usually the Hardest 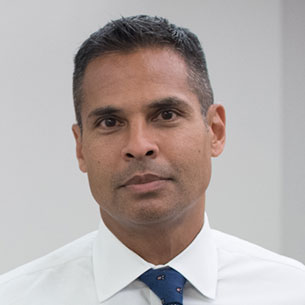 Nicholas Turner, who heads the Vera Institute of Justice, recalls some advice from his mother whenever he’s facing difficult options.

“She said, ‘If you face a tough decision, the harder road is almost always the right one to travel. Choose it,’” he explained. “I refer to that a lot in matters big and small, and most certainly in times when I am feeling challenged or at a critical juncture.”

As the leader of a national organization committed to ending overcriminalization and mass incarceration in America, Turner faces many challenging roads. He first joined Vera two years out of Yale Law School and stayed for nine years. After serving as a managing director at The Rockefeller Foundation from 2007 to 2013, he returned to Vera as its fifth President and Director. He is the first person of color in this role.

“The best way I can describe my leadership journey is one of being a perpetual student and recognizing the ever-present necessity to evolve,” he said. “You never stop growing.”

Under Turner’s leadership, Vera has focused its efforts on driving national change, tripled its budget, and strengthened its policy advocacy and its ability to shape public debate. Recent major initiatives include a successful campaign to eliminate the ban on Pell Grants for incarcerated students, the creation of a multi-city network committed to providing representation to immigrants facing deportation, and a multi-city effort with prosecutors to reduce racial disparities and a network focused on ending incarceration of girls.

“At Vera, different moments have forced me to adapt and change my leadership approach, and I am always questioning and approaching the task with humility,” he said.

Throughout his career, Turner has reflected back on his time at Yale Law School, a place he remembers as encouraging leadership and instilling a commitment to service.

“It inspired me, and I knew it would nurture in me the potential for leadership,” said Turner.

Beyond exposing him to the possibility of becoming a leader, Turner said Yale Law School gave him, “the confidence to explore and take risks, intellectual, personal, and career-wise. And to do so authentically.”

As he developed his own leadership style, Turner observed and learned from the leaders around him.

“I took note of what I admired, and I tried to learn from their challenges,” he said.

After his initial employment with Vera, Turner continued to grow as a leader at The Rockefeller Foundation as a member of the senior leadership team. He directed key initiatives, including transportation policy reform in the U.S. to promote social, economic, and environmental interests, and redevelopment in New Orleans to advance racial and socioeconomic integration. Along the way, he developed ideas about creating a culture in which people working for a cause can succeed.

“I believe we are at our best, and people succeed most, when we have reinforced a culture not only defined by deep commitment to mission and purpose, but a feeling of trust and care,” he said, adding that people succeed when they understand that they matter as full human beings.“ I say ‘we’ here and not ‘I,’ because culture is formed by every employee.”