The Importance of Mentorship 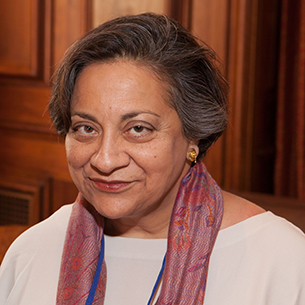 Sushma Soni knew she wanted to attend law school when she witnessed her father win his employment contract case against the University of Tennessee system. “My father’s win left me very impressed by the power of the courts to vindicate people’s rights,” said Soni. “My father went on to become a tenured math professor at the University of Tennessee.”

After law school, Soni clerked on the United States Court of Appeals for the Fourth Circuit, then joined the Civil Division Appellate Staff through the Department of Justice (DOJ) Honors Program and never left.

In addition to her work as an appellate attorney, Soni serves as the Training Coordinator for the Appellate Staff, where she is responsible for managing the office’s training budget, organizing panels with federal judges, and coordinating with the Appellate Sections of the other divisions.

For Soni, leadership includes giving people the tools for success — often tools they didn’t know that they needed.

Her leadership journey began when Soni took on several roles at a nonprofit organization, including sitting on their board of directors. Those experiences prepared her to mentor Yale Law School students about brief writing and oral argument and to share career opportunities at the DOJ. During her summers, she served as a mentor to student members of Yale Law Women. Later, she joined The Appellate Project to mentor students of color interested in entering appellate practice.

“One important point I’ve learned from mentorship is that people want to be heard,” said Soni. “They want you to listen to them, not ‘solve’ them.” She added, “If you listen and share your knowledge generously and honestly when asked, you can help individuals make the choices that are right for them.”

Soni has personally benefitted from the advice of mentors throughout her career, including several professors at the Law School.  She credits Professor Stephen Carter ’79, for whom she worked as a research assistant, for the example he set by treating his research assistants with consideration and by acknowledging their work in his books and articles, and credits Professors Drew Days ’66 and Harold Hongju Koh for demanding her best in her law school papers. She cited Professor Lea Brilmayer as her greatest influence as a mentor. “Her advice and encouragement were invaluable, and she provided the template that I have followed in advising YLS students about public sector careers,” said Soni.

“Mentorship can be exhausting; it will not win you industry accolades. But I’ve found it personally rewarding.”