A Career Guided by Curiosity and Innovation 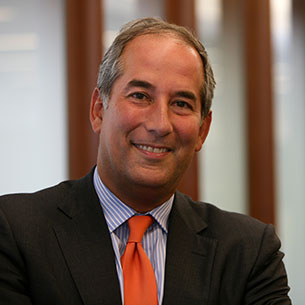 Tom Glocer, the former top executive of Thomson Reuters, took a new turn in his career when he left the worldwide provider of news and professional information a decade ago.

He went on to start and lead new companies involved in cyber security, tech for the financial industry, and venture capital. It’s all part of a leadership journey he describes as “a meandering river that followed the North Star of curiosity and learning new things.”

Glocer started at Reuters Group PLC, the predecessor of Thomson Reuters, in 1993. He became CEO in 2001 and continued in that role when the company became Thomson Reuters. Prior to joining Reuters, Glocer was a mergers and acquisitions lawyer at Davis Polk & Wardwell in New York, Paris, and Tokyo. He joined the firm the year he graduated from Yale Law School.

His legal education prepared him for leadership through “intellectual rigor with a playful twist, the confidence to take unpopular actions, a questioning approach, a focus on what should be rather than how one finds the state of the world,” he said.

An openness to new technology is one through line in Glocer’s career. He recalls an early interest in computing when he was an undergraduate at Columbia University. He lists his approach to technology among his core values and skills as a leader, as well as “authenticity, hard work, an embrace of different cultures and ways of working, a strong ethical backbone.”

While cyber security was not at the forefront of many people’s minds when he started at what would become Thomson Reuters, Glocer became aware of the increasing threat of cyberattacks in the corporate world during his time there. He was introduced to national security officials who were concerned that corporations were not taking the risk seriously enough. This led him to organize a series of gatherings on the issue with security experts and fellow CEOs.

After leaving Thomson Reuters in 2011, Glocer became more directly involved in cyber security. He had been for several years a member of the board of the global financial services firm, Morgan Stanley, when he co-founded the cyber defense company BlueVoyant LLC in 2017 with a former Morgan Stanley executive. He is also the Chairman of Istari Global Ltd., a cyber risk management platform organized by Temasek Holdings Private Ltd.

Glocer has also led in the field by investing in it. He is a Partner in Communitas Capital LLC, a fintech-focused venture capital fund. In addition, he is the Founder and Managing Partner of Angelic Ventures, LP, a family office that invests in technology start-ups. He is also the Executive Chair and Co-Founder of Capitolis Inc., which provides software as service for financial institutions.

The hallmarks of his approach to leadership include, in his words, “a light managerial touch, zero tolerance for bad behavior but permission to make commercial mistakes, taking risks to promote talented and diverse managers, a culture of respect.”

Glocer continues to serve on a number of boards, including being lead director of both Morgan Stanley and Merck boards.