Leadership Is a Team Sport 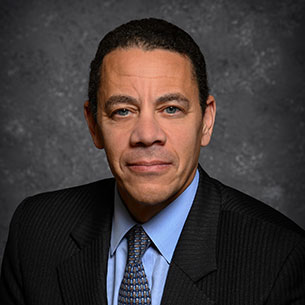 William Kennard has had a distinguished career in both the public and private sectors. Many of the conveniences in broadband technology we enjoy today are the result of his accomplishments as Chairman of the Federal Communications Commission in 1997.

As Chairman of the Federal Communications Commission, Kennard presided over the agency at a historic time. During his tenure, he shaped policies that created an explosion of new wireless phones and brought the internet to a majority of American households, which resulted in billions of dollars of investment in new broadband technologies. At the same time, he implemented bold new policies to bridge the digital divide in the United States and around the world.

As FCC Chairman, Kennard became well known for advocating for people left behind by the digital divide. He implemented the E-rate program, which brought the internet to disadvantaged schools and libraries. Under Kennard's leadership, the FCC dramatically expanded access to communications technologies for people with disabilities. The commission also adopted pioneering policies to increase telephone service to rural areas, especially to Native Americans living on tribal lands. He worked to create more ownership and employment opportunities for women and minorities in the communications sector.

Humility is one of the core values of leadership for Kennard.

“I admire and seek to emulate leaders who lead with humility. The finest leaders I know understand that leadership is first and foremost an act of humble service to others,” said Kennard.

President Barack Obama appointed him to serve as the United States Ambassador to the European Union in 2009. As Ambassador, Kennard made reinvigorating the U.S.-EU economic relationship and eliminating regulatory barriers his top priorities. He also helped to cement close U.S.-EU coordination on a range of common foreign policy priorities, including the Balkans, Libya, the political transitions in the Middle East, and the adoption of historic nuclear non-proliferation sanctions against Iran and North Korea.

Kennard has received many honors and awards for his accomplishments, including honorary degrees from Howard University, Gallaudet University, and Long Island University.

In his private sector career, Kennard has worked in the financial services industry. Before joining the Obama Administration, he was a Partner and Managing Director of The Carlyle Group, a global private equity firm, where he led investments in the telecommunications and media sectors. Upon returning to the U.S. after his service as an Ambassador, Kennard co-founded Astra Capital Management, a private equity firm based in Washington, D.C. He continues to serve on the firm’s Investment Committee. He is also Co-Founder and Chairman of Velocitas Partners LLC and serves as an advisor to and founding investor in Staple Street Capital.