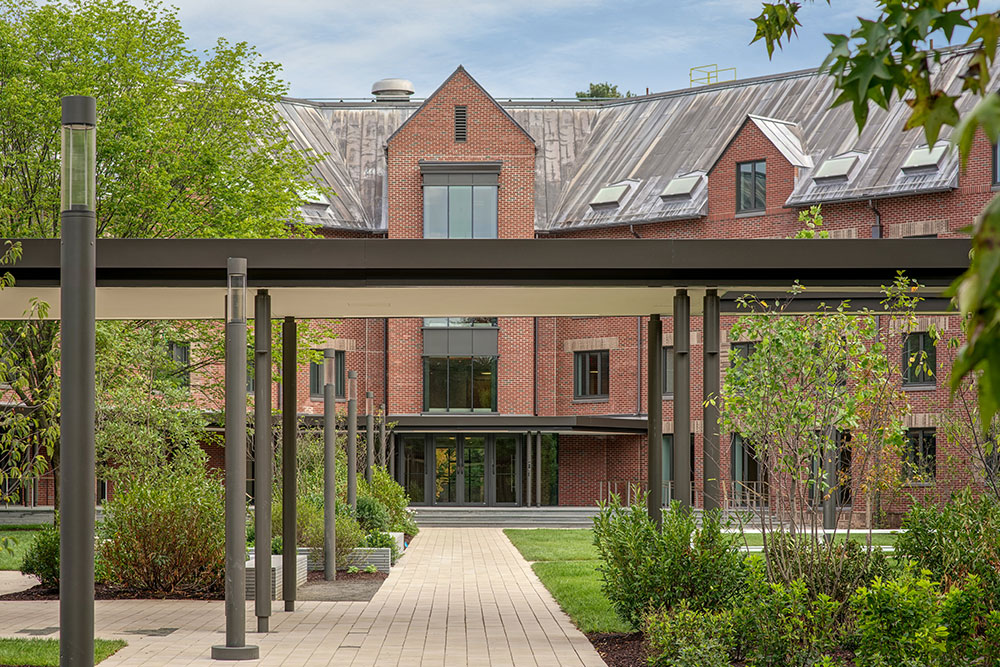 With its new building, the Law School adds a beautiful living and learning environment

More than 100 Yale Law School students made history this fall, taking up residence at the Law School for the first time in nearly 20 years. Thanks to the School’s acquisition of Baker Hall and a yearlong redesign and renovation process, sixty residential suites became available in 2018, along with a major increase in teaching and student activity spaces. The opening of Baker Hall marks the first expansion of the Yale Law School campus since the historic Sterling Law Building became home to the School in 1931. 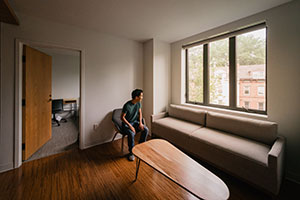 The first wave of students began to take occupancy at Baker Hall in late August, as the builders made finishing touches to the painting, technicians successfully tested the all-new temperature controls, and specialists finalized the building’s 20 art installations. First-year students, who comprise the majority of Baker Hall residents, arrived early for orientation events before the start of classes. They were followed by a number of returning law students who had chosen to trade their previous off-campus digs for a new experience: the chance to live where they study and to immerse themselves fully in the life of the School.

Third-year student Adrian González ’19, moving into a suite on Baker Hall’s third floor, spoke of the “new opportunities for engagement among students” that his change of residence promises. “My favorite part about Yale Law School is the people,” he stated. “Like the faculty, my classmates have continuously impressed me. I’m grateful to be a part of this experience.”

Monday, August 27: fall classes begin. The new classrooms downstairs, on Baker Hall’s ground floor, had their first test run amid high expectations. “I felt honored,” said Professor Robert C. Post ’77, who had launched plans for Baker Hall in 2013 while serving as the dean of the Law School, “to teach the very first class in the new building’s main classroom.” After the inaugural class — a section of Constitutional Law with approximately 50 students — Post pronounced the Tsai Lecture Theater “an ideal teaching space.”

Recalling the original motivation for expanding the campus, Post said, “The School had run out of space — every kind of space. The School had ended the dormitory accommodations, which for most of the 20th century had allowed students to live in the building where they were studying. We needed classroom space desperately, as well as office space and space for the activities carried on outside of class.”

“Baker Hall represents both our past and our future,” commented Dean Heather Gerken. “It celebrates our rich traditions, while providing students with the tools they need to embrace the future. It marks the return of an experience central to life at Yale Law School, as well as the advent of a new era for the education of our students.”

Baker Hall’s classrooms include many sized for small groups, ideal for classes of first-semester students. Just how this building will affect daily life at the School, its foot traffic and its rhythms, and special uses of its many spaces is still developing. Professor David Schleicher, who is teaching both a lecture course and a small reading group in Baker during the fall 2018 semester, says that the role of Baker Hall “is still very much open, as we start this new chapter. And that’s what makes this start so exciting.” 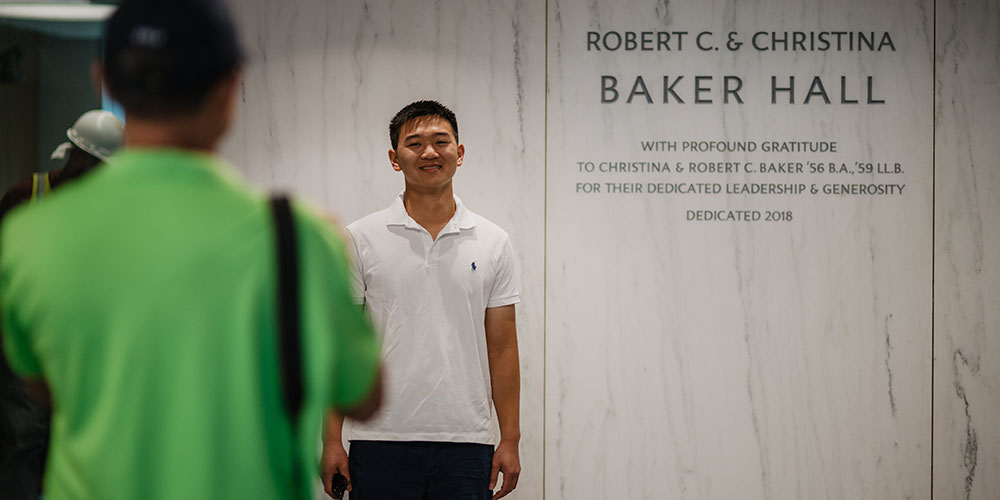 The inscription just inside the main entrance to the Tsai Lobby honors the landmark gift by Christina and Robert C. Baker, which helped launch the $60 million campaign for the acquisition and renovation of Baker Hall, a 1998 building originally used for temporary undergraduate occupancy. The naming of the building honors the Baker family’s many ties to Yale Law School and the donors’ “unique opportunity to truly give back” to the School. Posing by the inscription is Halbert Bai ’20, a Public Health student and resident of Baker Hall. 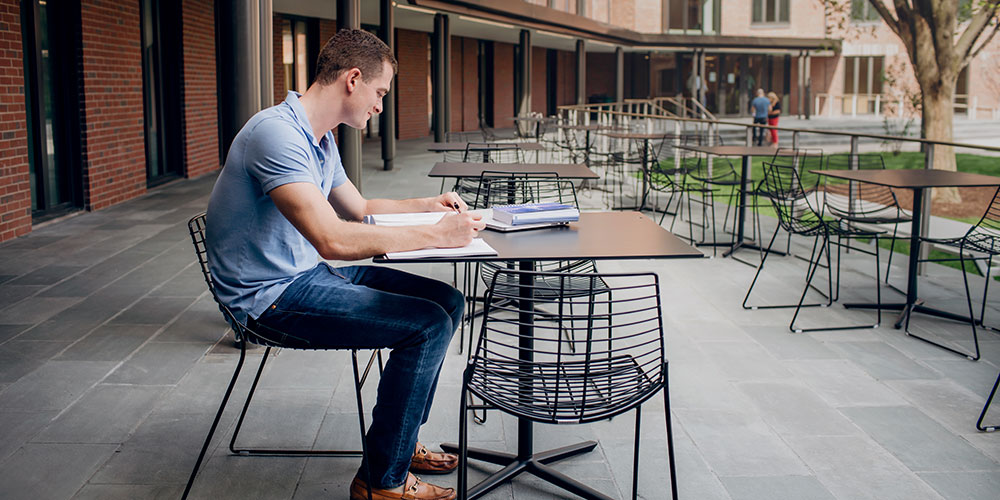 J.D./M.B.A. student Rob Newell ’20 takes advantage of mild early autumn weather for a study session in the courtyard. “Space was always at a premium in Sterling Law Building,” he reports. “My reasons for moving into Baker Hall were the convenience and comfort, the upgraded systems, and a big expansion in the amount of shared areas.” 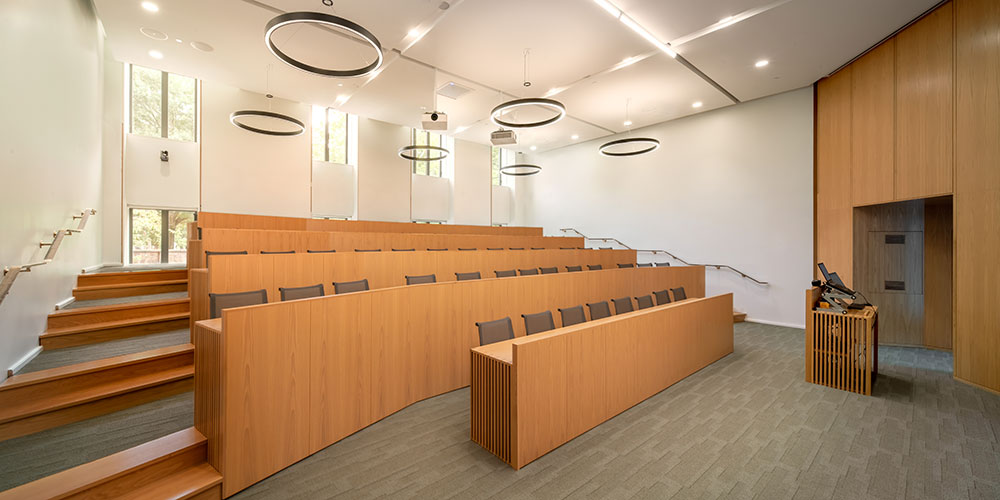 The Paul Tsai Lecture Theater on the ground floor, Baker Hall’s largest teaching space, is “the very model of modern classroom” according to Professor David Schleicher. “It’s a dream classroom, airy and light, with technology well integrated. Stadium-style seating, and the particular shape of the room, makes it easier to choose students individually for Socratic-style dialogue.” 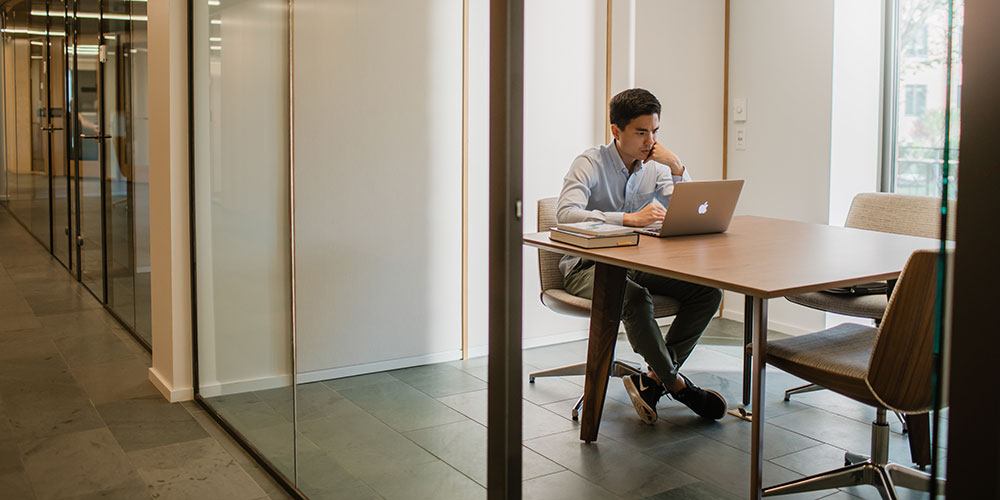 Along with lecture and seminar space and common rooms for socializing, Baker Hall accommodates private study. Here, Ted Gkoo ’20 has Room 127 all to himself. 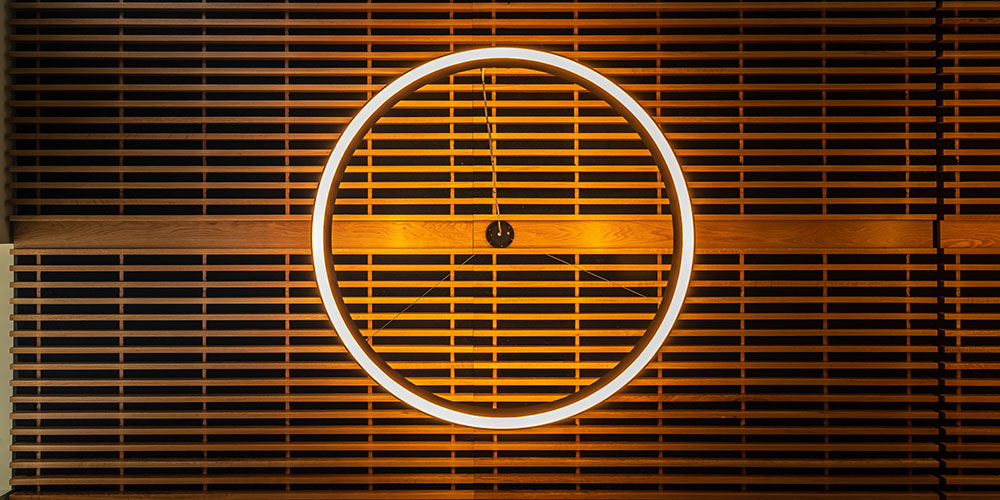 The round shape for ceiling lights, here in the Hurst Student Center in Baker Hall, provides a unifying design motif throughout the building’s ground floor. 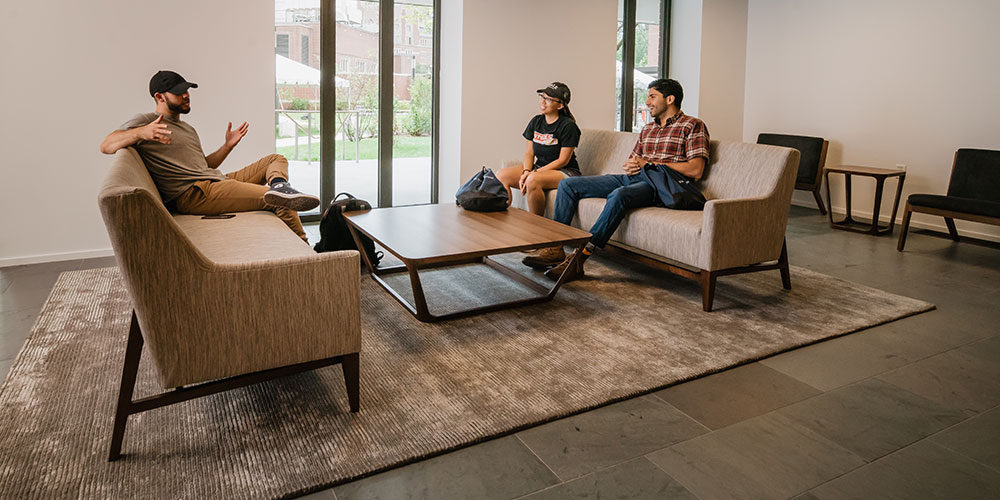 The Hurst Student Center includes this comfortable, roomy lounge and activity area at the west end of the ground floor, with tall floor-to-ceiling windows that open onto the courtyard. First-year law students Josh Guerra ’21, Rhea Christmas ’21, and Manny Rutinel ’21 are shown in a break between classes. 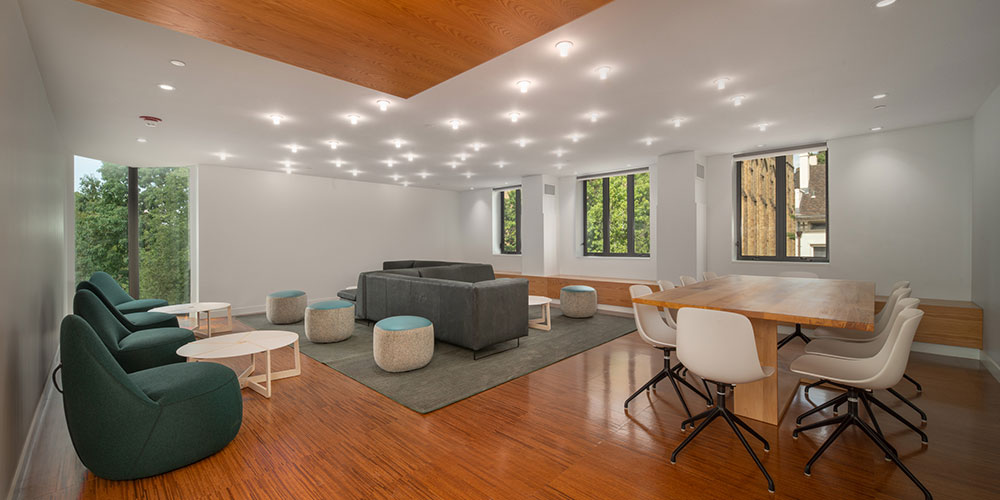 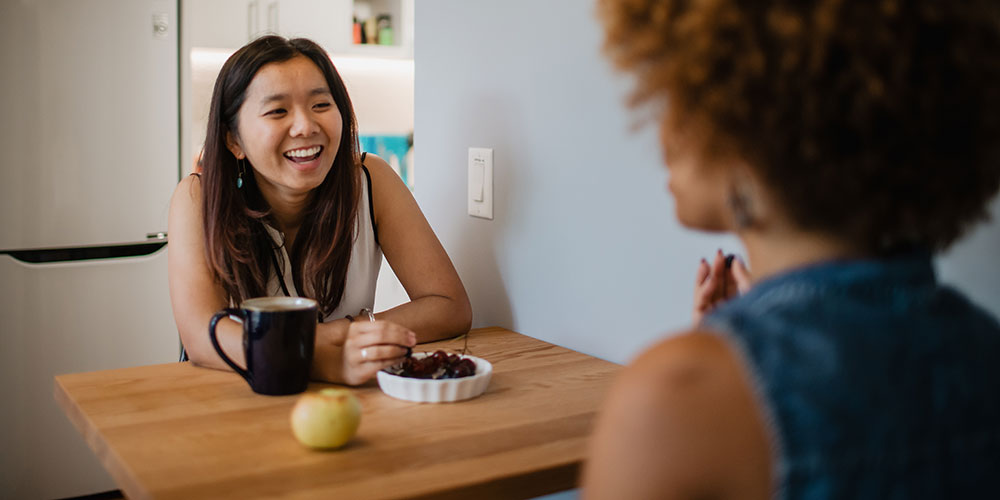 “Apartment-style living is especially important to me,” says Styna Tao ’19, shown in the suite she shares on Baker Hall’s third floor. “I was drawn in particular to having a kitchen, and I doubt I’d have moved here if the building only included dorm rooms.”

The Art of Baker Hall

The walls and courtyard of Baker Hall are filled with art, including works by Donald Judd, Sol LeWitt, Robert Mangold, Rona Pondick, and George Warren Rickey. In addition to pieces on loan from the Yale University Art Gallery, a number of works were commissioned by Yale Law School for the new building. 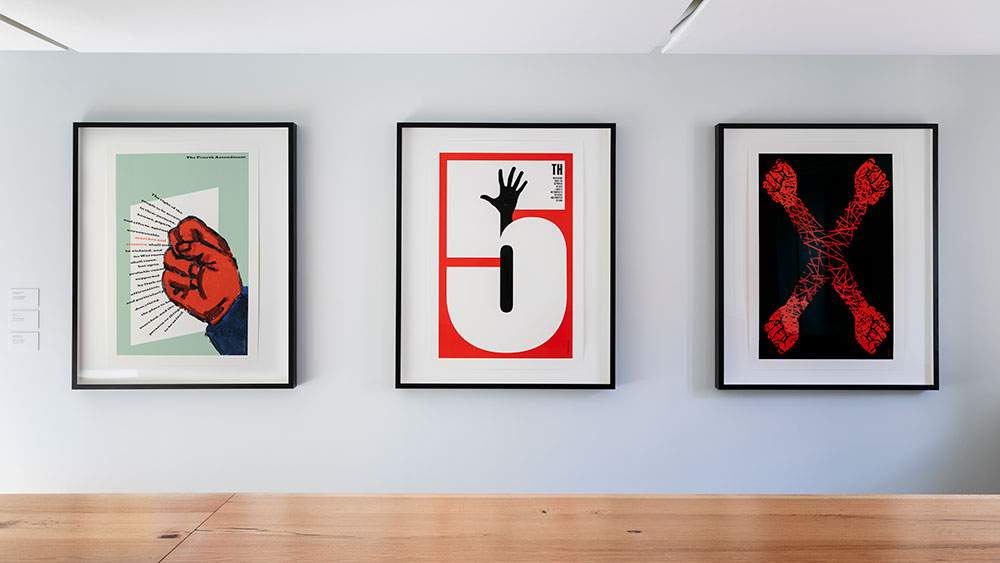