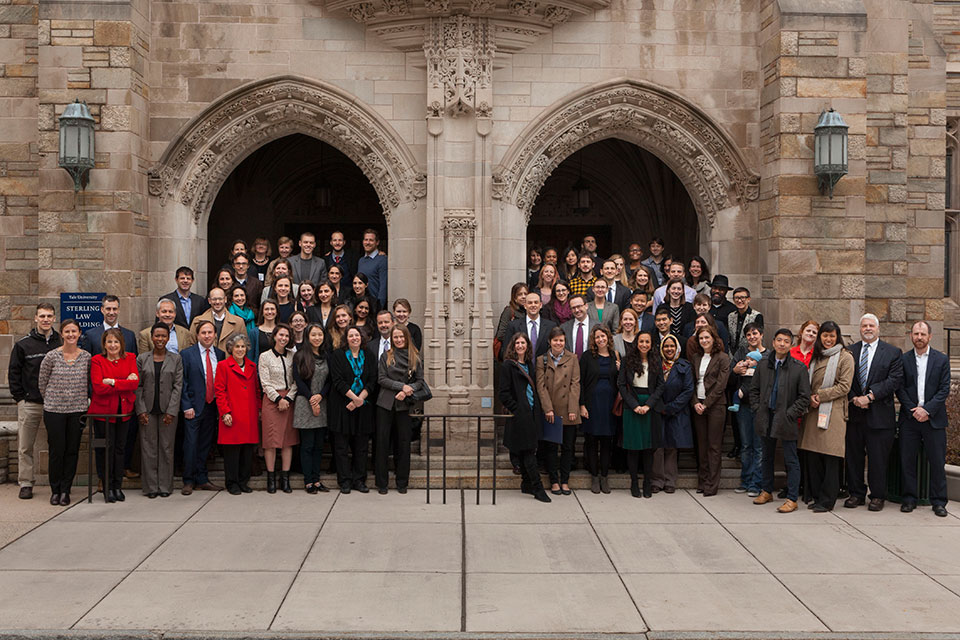 The Arthur Liman Center for Public Interest Law announced the selection of nine new Fellows for 2017–2018 and the provision of extensions to four current Fellows. With the incoming class, the Liman Center will have provided fellowships to 123 Yale Law School graduates since its inception as the Liman Program in 1997.

Celina Aldape ’17 will join D.C. Law Students in Court, where she will represent low-income tenants, often with limited English proficiency, who are at risk of losing their rent-controlled housing. While at Yale, Aldape participated in the Criminal Justice Clinic, the Landlord/Tenant Legal Services Clinic, and the Liman Project. She graduated from Columbia University in 2014.

Rory Coursey ’17 will join the Legal Assistance Foundation in Chicago, where she will expand a Medical-Legal Partnership (MLP) with Cook County Health and Hospital System. The project will provide legal representation and community advocacy for low-income patients facing barriers to accessing medical care. Coursey has participated in the Re-Entry Clinic and was the student director of the Transitions Medical-Legal Partnership. She graduated from Clark University in 2013.

Ryan Cooper ’15 will spend his fellowship year working at the Travis County Mental Health Public Defender, where he will represent indigent defendants whose competency to stand trial has been questioned because of their cognitive challenges. He aims to promote alternatives to detention and incarceration for persons with intellectual and developmental disabilities. Cooper graduated from the University of Texas at Austin in 2010 and from Yale Law School in 2015, where he was the Co-Editor-in-Chief of the Yale Law & Policy Review, a student director of the Green Haven Prison Project, a member of the Criminal Justice Clinic, and a participant in the Liman Project. He is currently clerking for the Honorable Robert L. Pitman of the U.S. District Court for the Western District of Texas.

Lynsey Gaudioso ’17 JD/MEM will join Public Advocates in San Francisco, where she will work with communities to promote affordable housing, anti-displacement, and equitable transit policies. Gaudioso has been active in the Environmental Protection Clinic, the Community and Economic Development Clinic, and the Native Peacemaking Clinic; she has also served as the Diversity and Membership Officer for the Yale Law Journal. Prior to law school, Gaudioso was a Luce Scholar at the Centre of Live and Learn for Environment and Community in Viet Nam. She graduated from Vanderbilt University in 2010.

Carly Levenson ’16 will join Connecticut’s Division of Public Defender Services in the New Haven office and focus on problems surrounding the quality of forensic evidence as part of the office’s newly formed DNA Unit. Levenson will represent indigent criminal defendants whose cases involve the analysis of DNA; she will also create an online database of DNA-related resources for public defenders. Levenson graduated from Amherst College in 2009. While at Yale, Levenson worked in the Criminal Justice Clinic, Capital Assistance Project, and Legal Assistance Clinic. She is currently clerking for the Honorable Jeffrey Alker Meyer of the U.S. District Court for the District of Connecticut.

Hava Mirell ’16 will spend her fellowship year as a policy advisor in the Office of Rhode Island Governor Gina Raimondo, where she will develop and implement new policies on restrictive housing, reentry, and probation. Mirell will be working with A.T. Wall, the Director of the Rhode Island Department of Corrections. Mirell participated in the Liman Project and served as an Articles Editor for the Yale Law Journal. She graduated from Stanford University in 2012 and is currently clerking for the Honorable Denise Cote of the U.S. District Court for the Southern District of New York.

Nathan Nash ’17 will spend his fellowship year at the Lawyers’ Committee for Better Housing (LCBH) in Chicago. There, he will work to expand the Healthy Housing Chicago Medical-Legal Partnership (MLP) so as to protect low-income tenants’ rights to safe housing. Nash has served as a co-director of two of Yale’s Medical-Legal Partnerships, as a member of Yale’s Mortgage Foreclosure Litigation Clinic, and as a student fellow at the Solomon Center for Health Law & Policy. Nash graduated from Amherst College in 2012 and spent two years working for the U.S. Department of Health and Human Services.

My Khanh Ngo ’17 will spend her fellowship year with the Office of the Alameda County Public Defender in California, where she will represent immigrants facing removal as a result of their criminal cases; she will also help communities respond to immigration enforcement actions. Ngo has participated in the Worker and Immigrant Rights Advocacy Clinic, the International Refugee Assistance Project, the Asylum Seeker Advocacy Project, and the Capital Punishment Clinic. She graduated from Yale College in 2010.

Rachel Shur ’17 will spend her fellowship year with the Orleans Public Defenders, where she will work on the problems imposed by attempts to collect fines and fees from poor criminal defendants; her focus will be on challenging the practice of incarcerating individuals for the inability to pay a criminal justice debt. Shur graduated from Brown University in 2012. While at Yale, Shur participated in the Criminal Justice Clinic and the Capital Punishment Clinic, and she has also served as a Co-Director of the Capital Assistance Project.

Corey Guilmette ’16 will continue his fellowship with the Public Defender Association in Seattle where he has been challenging discriminatory enforcement of trespass policies. Guilmette graduated from Wesleyan University in 2013. During law school, he participated in the Criminal Justice Clinic, the Green Haven Prison Project, and the Liman Project; he was a co-author of the 2014 report, Time-in-Cell, which detailed national research on the numbers and conditions of individuals in prison who are placed in solitary confinement.

Devon Porter ’15 will spend a second fellowship year with the ACLU of Southern California, where she will continue to work on the costs imposed on criminal defendants for their representation and the challenges that indigent individuals have in paying fines and fees. Porter aims to change the structure of economic burdens placed on low-income criminal defendants. Devon graduated from Reed College in 2011 and from Yale Law School in 2015, where she worked with the Liman Project to gather national data on solitary confinement in prison systems across the country and co-authored the 2014 report Time-in-Cell. She clerked for the Honorable Richard A. Paez of the U.S. Court of Appeals for the Ninth Circuit.

Abigail Rich ’16 will continue working with the East Bay Sanctuary Covenant in Berkeley, California, where she represents refugees who have suffered many traumas; her project aims to develop models for working with clients with histories of trauma. She also works with mental health care facilities that offer treatment for asylum seekers. Rich was in the Immigration Legal Services Clinic, the Worker and Immigrant Rights Advocacy Clinic, the Landlord Tenant Clinic, and the International Refugee Assistance Project. She graduated from Washington University in St. Louis in 2009.

Jonas Wang ’16 will spend another fellowship year with Civil Rights Corps, which is based in Washington, D.C. At Civil Rights Corps, Wang works on litigation in several states, including Louisiana, Alabama, and Tennessee, that impose undue economic burdens on criminal defendants. Wang participated in the Veterans Legal Services Clinic and served as an Articles Editor of the Yale Law Journal. Wang graduated from Harvard College in 2012 and received the Ames Award for Service.