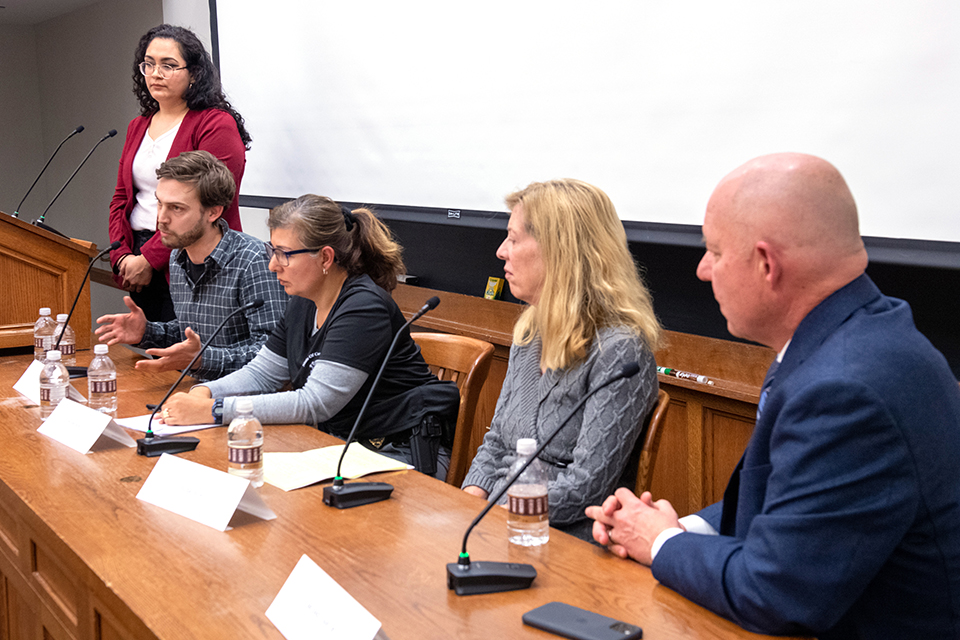 On Monday, November 18, 2019, the Advanced Sentencing Clinic at Yale Law School hosted a screening of the Frontline documentary “Life on Parole,” which follows the lives of four individuals on parole in Connecticut. The screening was followed by a panel discussion about the state of parole in Connecticut, moderated by Destiny Lopez ’21. Kyra Schoonover ’21, also a member of the Advanced Sentencing Clinic, introduced the panelists.

The moderated panel discussion featured Jeff Arak, co-producer of the Life on Parole documentary; Elisa Villa, Parole Revocation Unit supervisor and public defender; Mike Lawlor, former Undersecretary for Criminal Justice Policy and Planning at the Office of Policy and Management; and Katherine Montoya, a parole officer who appeared in the film.

“Life on parole is complicated for all those involved — government policy makers, [the] Department of Corrections, parole officers, and especially those on parole, whose lives are often upended by the disruptive nature of the process,” said John Gonzalez ’20, a member of the Advanced Sentencing Clinic in his opening remarks.

Many panelists discussed how the culture amongst parole officers is key to improving the parole system. Mike Lawlor, also featured in the film, emphasized that parole officers should be more like counselors than the police.

“Parole officers used to play the role of umpires, calling ‘balls’ and ‘strikes’ for parolees who violated the conditions of their parole. Now, they are more like coaches, encouraging parolees to be successful,” said Lawlor.

A reform that received support from all the panelists was the new pilot program providing public defenders for those facing parole revocations.

“Having public defenders in parole revocation hearings is critical. We help those on parole prepare their cases and contextualize their stories,” explained Elisa Villa who supervises the new unit. “The process is difficult for those on parole to understand, and defense attorneys help ensure that remand decisions are fairer and less arbitrary.”

“The panel was a vital reminder that there are stakeholders in the criminal justice world who are actually enforcing our criminal laws, and that it’s important to be in dialogue with those people, even if it’s uncomfortable.” said Paula Garcia-Salazar ’22 who attended the event.

For several years, the Clinic has worked to reform the parole revocation process in Connecticut. The “Parole Revocation Project” began in 2015, when former Connecticut Governor Dannel P. Malloy recruited the clinic to investigate the state’s high rates of reincarceration.

In 2017, the Samuel Jacobs Criminal Justice Clinic and Jerome N. Frank Legal Services Organization released a report called, “Parole Revocation in Connecticut: Opportunities to Reduce Incarceration.” Based on data collected by the students in the clinic, the report concluded that in November 2015, out of 49 revocation hearings, 100 percent of those on parole were remanded back to custody. In 79 percent of cases, individuals lost employment as a result of incarceration.

The Clinic then took many steps to improve the parole revocation process, which included ensuring that due process protections were incorporated into the scripts used by hearing examiners at the Board of Pardons and Paroles. In 2018, the Clinic presented to state leaders on the deficiencies of Connecticut’s system for appointing counsel for indigent parolees. Clinic students also represented individuals in parole revocation hearings to demonstrate how the introduction of counsel could help produce fairer outcomes.

Senate Bill 880 also grew out of the Clinic’s parole reform work. This act, which was passed in 2019, created a state-funded pilot program to provide counsel to all parolees who cannot afford representation. The Clinic submitted testimony in support, outlining the many benefits of representation.

Read press coverage of the event in the Yale Daily News.