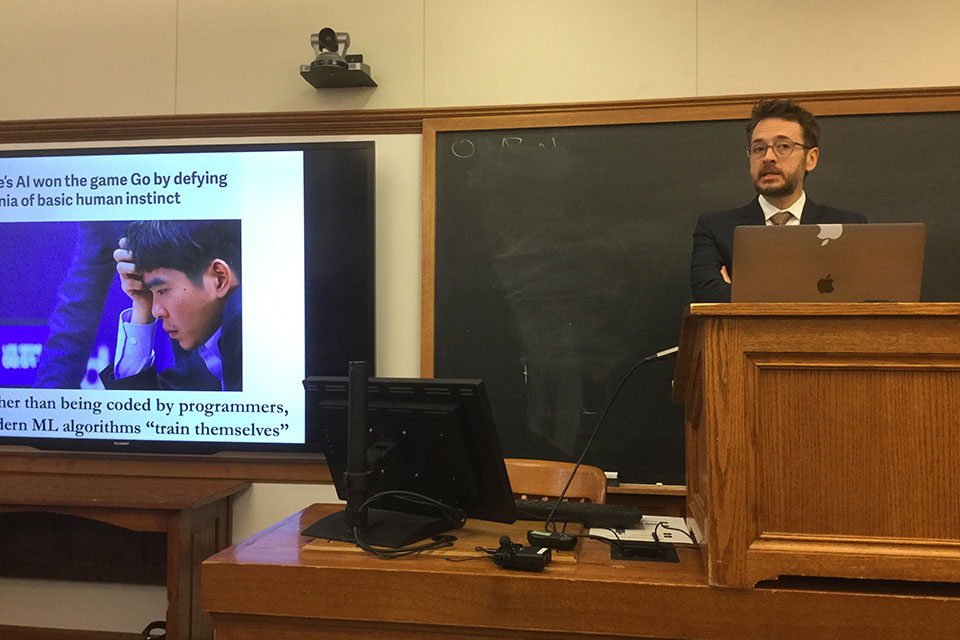 At the Seminar in Private Law on February 26, 2019, Brishen Rogers, an Associate Professor of Law at Temple University Beasley School of Law, spoke about the political economy of technology in the workplace, addressing the question: how is technology really changing work?

Jobs automation, algorithmic management, and fissuring are, according to Rogers, the three techno-sociological phenomena changing the character of labor. However, he argued, lawyers presently focus too much on the technological face of automation and too little on how the rights and duties in the workplace are affected by algorithmic management and fissuring and therefore by the distinctively legal regimes that allow them.

“The threat of automation is overstated,” Rogers said, explaining how predictions of mass-scale automation are not confirmed by empirics or by theory. Economic data, he argued, gives no reason to believe that automation is accelerating. He explained that many tasks humans consider to be low skill, like cleaning or gardening, resist automation to a surprising degree. Machines cannot make situational judgements, while robots’ manual skills remain limited. In the foreseeable future, according to Rogers, people will have jobs. The real question is whether they will be good jobs.

The quality of jobs is what should raise concern, according to Rogers. Since companies want to maximize profit, he said, if they cannot automate work, they will try to make it more efficient. Advancements in information gathering and processing technologies allow employers to collect and analyze unprecedented amounts of data about workers. Examples of such technologies include handheld scanners in warehouses, telematics in trucks, and control over employees’ computers and smartphones. Data from these sources fuel algorithmic tools for management, resulting in efficient but sometimes inhumane timetables and schedules.

Rogers made clear that the net effects of algorithmic management are ambiguous, and it is possible that some of these tools will benefit workers. Fissuring, by contrast, almost never benefits people. This practice of breaking up firms into groups of formally independent entities, and consequently turning employees into subcontractors, is by no means new. Technology, however, significantly increases the scale and precision of such operations.

Rogers expressed the view that we cannot rebuild the economy around labor, but we can change the political economy of work and technology. This, however, requires concentrating on the changes already in place, and on the legal regimes that enable them, rather than on speculative technological threats in the future.