Chancellor of the Delaware Court of Chancery Speaks on Court's Role 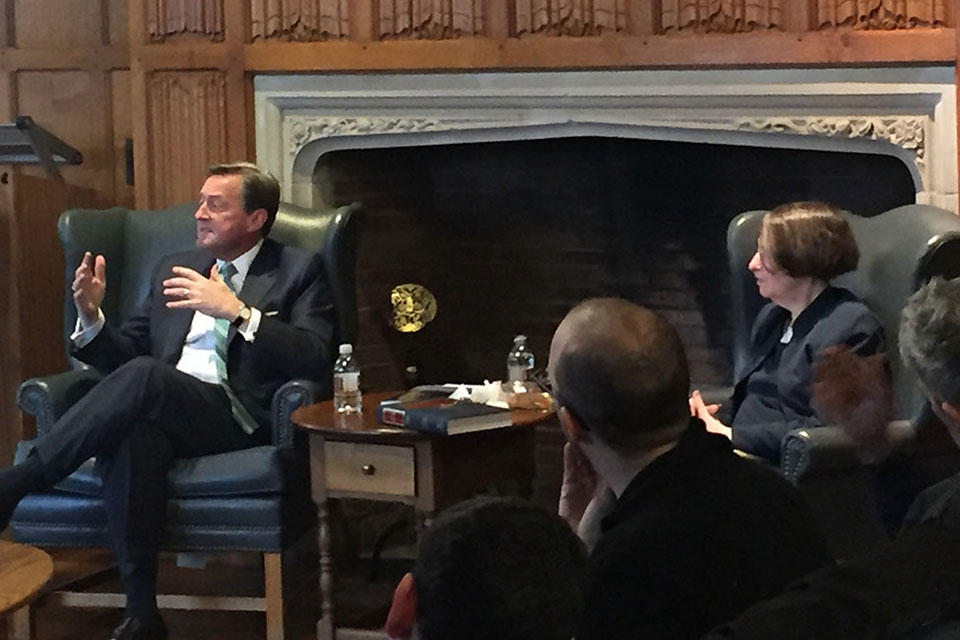 On February 7, 2018, the Yale Law School Center for the Study of Corporate Law, the Yale Law & Business Society, and the Career Development Office co-sponsored a Marvin A. Chirelstein Colloquium with Andre G. Bouchard, Chancellor of the Delaware Court of Chancery. The Delaware Court of Chancery is widely recognized as the preeminent forum in the United States for adjudicating corporate law disputes.

Speaking to an audience of about 40 students, faculty members, and practitioners, Chancellor Bouchard first described the history of the Delaware Court of Chancery, which is a court of equity. Courts of equity and courts of law both originated in England, and are different from each other in two key ways: (i) courts of equity sit without a jury, unlike courts of law, with the judges making all findings of fact; and (ii) courts of equity often provide non-monetary remedies (e.g., injunctive relief or specific performance), whereas courts of law generally provide monetary damages. Chancellor Bouchard noted that, after the American Revolution, most states merged courts of equity and law, and therefore Delaware is an anomaly for maintaining a separation. This separation has served Delaware well, however, as it has allowed the Delaware Court of Chancery to develop unique competence in, as well as extensive precedent on, matters relating to corporate governance and fiduciary duty, and has made Delaware a popular venue for businesses. Chancellor Bouchard noted that currently 1.3 million corporations and other business entities are registered in Delaware, including more than half of public corporations and Fortune 500 companies.

Chancellor Bouchard then explained how the Delaware Court of Chancery would evaluate a corporate governance claim brought before it. The first step, he emphasized, is to determine whether the Delaware General Corporation Law permits directors and officers to take the action that is the subject of the claim. If the answer is "yes," then the second step is to ascertain whether the action breaches equitable principles, such as the duty of care or loyalty. In evaluating if fiduciary duties were breached, the Court applies certain standards of review, such as the business judgment rule (which defers to judgments made by directors), enhanced scrutiny (i.e., under Revlon and Unocal), and the entire fairness standard (which requires a full inquiry into a transaction's merits).

Chancellor Bouchard touched upon certain recent decisions of the Delaware Court of Chancery, and how they demonstrate the complexities of applying equitable principles in a modern world. For example, he spoke about In re: Trulia, Inc. (2016), where the Court refused to approve a stockholder class action settlement. Chancellor Bouchard explained that the Court had experienced a substantial increase in litigation involving mergers and acquisitions of public companies, which resulted in settlements where respondents provided supplemental disclosures to plaintiffs, in exchange for plaintiffs releasing a broad range of shareholder claims against the respondents and for plaintiffs' counsel to receive fees. He stated that, in many instances, the supplemental disclosures from respondents did not provide new, material information. Furthermore, Chancellor Bouchard noted that these settlements rarely resulted in payments to shareholders, and indeed foreclosed opportunities for shareholders to bring meritorious claims later. In response to this trend, the Court held in Trulia that disclosure-only settlements will be scrutinized more rigorously to ensure that the supplemental disclosure is "plainly material" to shareholders. Chancellor Bouchard observed that while the opinion has limited the number of disclosure-only settlements before Delaware courts, similar proposed settlements are appearing with greater regularity before federal courts, and although some federal courts have adopted Trulia, it remains to be seen whether it will be widely adopted in the federal courts.

Chancellor Bouchard finished by discussing recent decisions regarding appraisal, and what they say about the role of judges and the market in determining fair prices in mergers and acquisitions, as well as recent decisions involving transactions with controlling stockholders. The Colloquium ended with Q&A between Chancellor Bouchard and students, faculty, and practitioners.