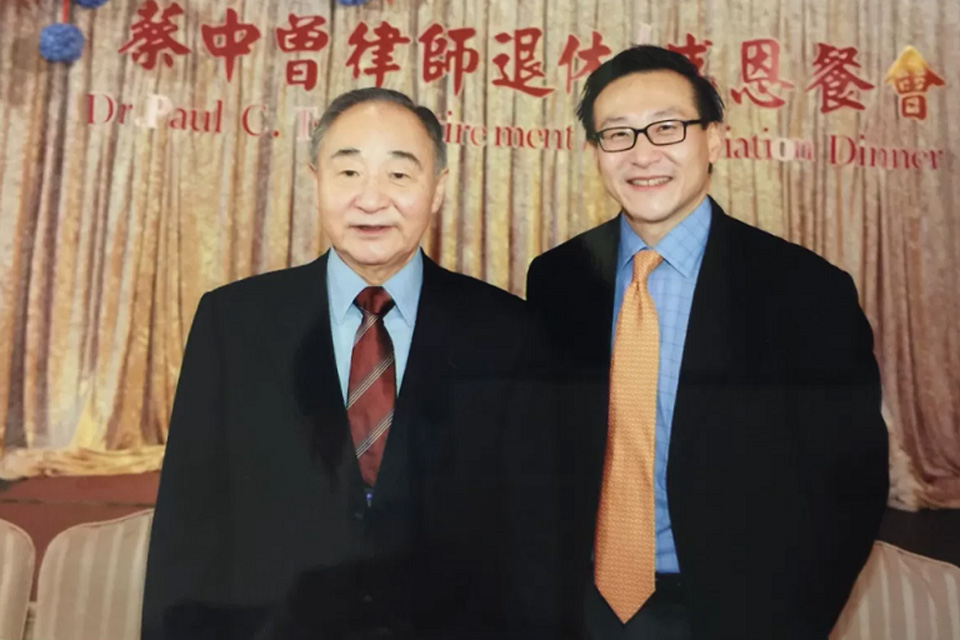 Yale Law School has received a gift of $30 million in honor of its distinguished alumnus, the late Dr. Paul C. Tsai, ’54 LL.M , ’57 J.S.D., to support the continuing work of the Law School’s China Center. This extraordinary gift was given by his son, Joseph C. Tsai, Yale College, B.A. ’86; Yale Law School, J.D. ’90. In recognition of this gift, the Center will be renamed the Paul Tsai China Center.

In announcing the gift, Yale Law School Dean Robert Post said: “This is a sterling moment for Yale Law School. Our remarkable alumnus Joe Tsai has given an exceptional gift in honor of his father Paul Tsai, whose life and career exemplify the very best of our Law School’s traditions. Joe’s generous gift honoring his father’s legacy eloquently evidences the special place of the Tsai family in the history of Yale Law School, and we are immensely grateful. Under Professor Paul Gewirtz’s inspiring leadership, the Paul Tsai China Center will continue its important work at the forefront of the United States’ engagement with China. This gift, its honoree, its donor, and the work of the Center are a source of great pride for us.”

Yale Law School’s China Center is a unique institution dedicated to helping advance China’s legal reforms, improving U.S.-China relations, and increasing understanding of China in the United States. In interaction with research and teaching at Yale, the Center works collaboratively with top experts in Chinese universities, government, and civil society on projects in areas such as judicial reform, administrative and regulatory reform, and public interest law. The Center’s work also includes efforts to improve U.S.-China relations more broadly, especially through dialogues with Chinese counterparts that bring together former senior government officials from both countries to address a broad range of economic, security, and political issues in the U.S.-China relationship. As the foundation of all these projects, the China Center staff undertakes teaching, research, and writing that seeks to contribute to the education and training of a younger generation and more widely advance understanding of China and U.S.-China relations.

The Center’s founder and Director is Paul Gewirtz, the Potter Stewart Professor of Constitutional Law at Yale Law School. While on leave from Yale as Special Representative for the Presidential Rule of Law Initiative during the Clinton Administration, he conceived and led the U.S.-China rule of law initiative agreed to by Presidents Bill Clinton and Jiang Zemin at their 1997 and 1998 summit meetings.

Paul Tsai, a native of Huzhou in Zhejiang Province, China, grew up in Shanghai and moved to Taiwan in 1948. He came to Yale in 1953 and in 1957 was the first ever graduate student from Taiwan to receive a J.S.D. degree from Yale Law School. When he returned to Taiwan, Dr. Tsai immediately became a pioneering figure in its economic miracle and integration into the international economy. For eight years while in government, he played a leading role in developing policies and laws that contributed to Taiwan’s extraordinary economic growth. Serving in various key government roles — as General Counsel of the Foreign Exchange & Trade Commission, Director of the Law Revision Planning Group, General Counsel of the Council for United States Aid, and Counsellor of the Council for International Economic Cooperation and Development — he drafted the crucial Statute for the Encouragement of Investment and also the Secured Transactions Act. To each role, Dr. Tsai brought high intelligence, deep knowledge, great energy, and an international perspective. In recognition of his outstanding civil service, Dr. Tsai received the President’s Award for Outstanding Performance in Government Services in 1963.

In 1965, Dr. Tsai and his father, Ruchin Tsar, established a private law firm, Tsar & Tsai — itself a pioneering effort as Taiwan’s first partnership law firm with a reputation for quality and innovation. In private practice, Dr. Tsai continued to contribute greatly to Taiwan’s growth and development, particularly in the international arena as he worked to represent multinational clients such as Coca-Cola, Johnson & Johnson, Sheraton Hotels, and Mattel to attract foreign capital to Taiwan.

As a third generation lawyer, Joe Tsai continued the family legal tradition, graduating from Yale Law School in 1990 and practicing with Sullivan & Cromwell in New York as an associate in the firm’s Tax Group. In 1995 Joe moved to Hong Kong to begin a career in investment management with the Asian office of Investor AB, the Swedish industrial holding company under the stewardship of the Wallenberg family. Joe’s career took a further turn when, in 1999, he met Jack Ma and soon after joined him as one of the founding members of the Chinese Internet company Alibaba. Today, Joe is executive vice chairman of Alibaba Group and serves on its board of directors.

About the gift, Joe Tsai said: “Through his intelligence, wisdom, and wit, my father was an inspiration and role model to me. I am proud and humbled to have followed his footsteps to Yale Law School. I am also extremely fortunate to have participated in the tremendous growth of China’s economy and technology development over the past two decades. Today, as I think about giving back to an institution that represents the confluence of experiences that shaped who I am, I can’t think of a better initiative than the China Center at Yale Law School under the leadership of Professor Gewirtz. This is the most meaningful way for me to remember my father and to recognize the development of China, its increasing role on the world stage, and the importance of U.S.-China relations.”

The Center’s Director, Professor Paul Gewirtz, stated: “This extraordinary gift is not only a profound act of a Yale son honoring his Yale father, but an extraordinary opportunity for Yale Law School to contribute to the understanding and future of China and U.S.-China relations. We’re deeply grateful to Joe Tsai, and my colleagues and I at the Paul Tsai China Center will continue our work with renewed belief in its importance and determined to make the most of the new opportunities before us.”