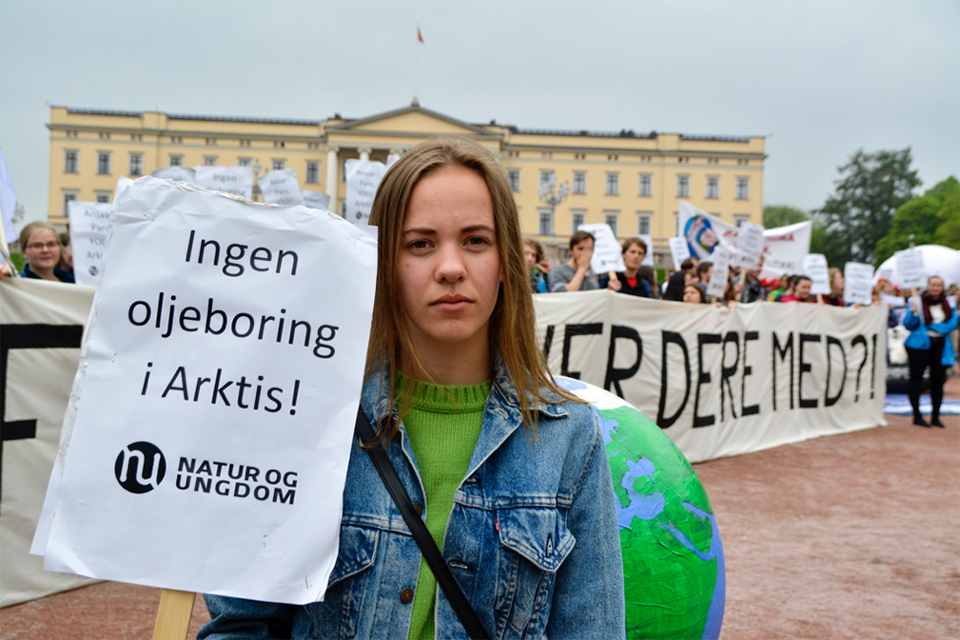 Aksjon mot oljeboring i Arktis” (“Action Against Oil Drilling in the Arctic”) by Anna Olerud/Natur og Ungdom is licensed under CC BY-ND 2.0.

A brief filed on October 31, 2017, in the Oslo District Court argued that new licenses for oil drilling in the Arctic issued by the government of Norway in June 2016 are inconsistent with the country’s obligations under international law. The Allard K. Lowenstein International Human Rights Clinic at Yale Law School authored the amicus brief, which explained how the new licenses conflict with Norway’s commitment to protect the rights of children and future generations.

The clinic submitted the brief in support of a suit filed in October 2016 by Greenpeace Nordic and Natur og Ungdom (Nature and Youth), Norway’s largest youth organization, against the Government of Norway. The suit asks the Court to rescind the licenses issued by Norway’s Ministry of Petroleum and Energy.

The licenses authorize thirteen oil companies, including U.S. corporations Chevron and ConocoPhillips and Norway’s Statoil, to explore and extract oil from the Barents Sea, a particularly vulnerable and fragile ecosystem in the Arctic.

The Greenpeace and Nature and Youth complaint in the case described how the Government of Norway failed to properly consider rights guaranteed in the Norwegian Constitution, Norway’s commitments under the Paris Agreement, and the licenses’ staggering environmental effects.

The Lowenstein Clinic’s brief explains that Norway’s obligations under international law require the licenses to be rescinded. By ratifying the Paris Agreement in 2016, Norway promised to reduce its emissions ambitiously to help limit the global surface temperature rise to 1.5 degrees Celsius above pre-industrial levels.

“As a party to various human rights treaties,” explained Peter Posada ’17, one of the student authors of the Lowenstein Clinic brief, “Norway committed to protecting the human rights to life, to the highest attainable standard of health, and to a healthy environment. By opening the Barents Sea to exploratory drilling and future oil extraction, Norway has foreclosed its ability to meet this promise—a promise it made to its people, its future generations, and the world.”

“Global warming is a grave threat to human rights, particularly the rights of children, indigenous people, and other vulnerable groups,” said Silk, who is also a member of the group of legal experts who drafted the 2015 Oslo Principles on Global Climate Change Obligations. “The Lowenstein Clinic prepared this brief as part of its commitment to help minimize the human rights harms that climate change will cause.”

“We hope not only that the suit by Greenpeace Nordic and Nature and Youth will be a successful model for resisting climate change,” said Bjerregaard, “but also that the Oslo District Court and other domestic courts throughout the world will emphasize states’ human rights obligations to prevent further climate change.”

The Oslo District Court will hear the case over the course of two weeks, beginning on November 14.

For more information, please contact Charlotte Finegold at charlotte.finegold@yale.edu or at (203) 432-8368.