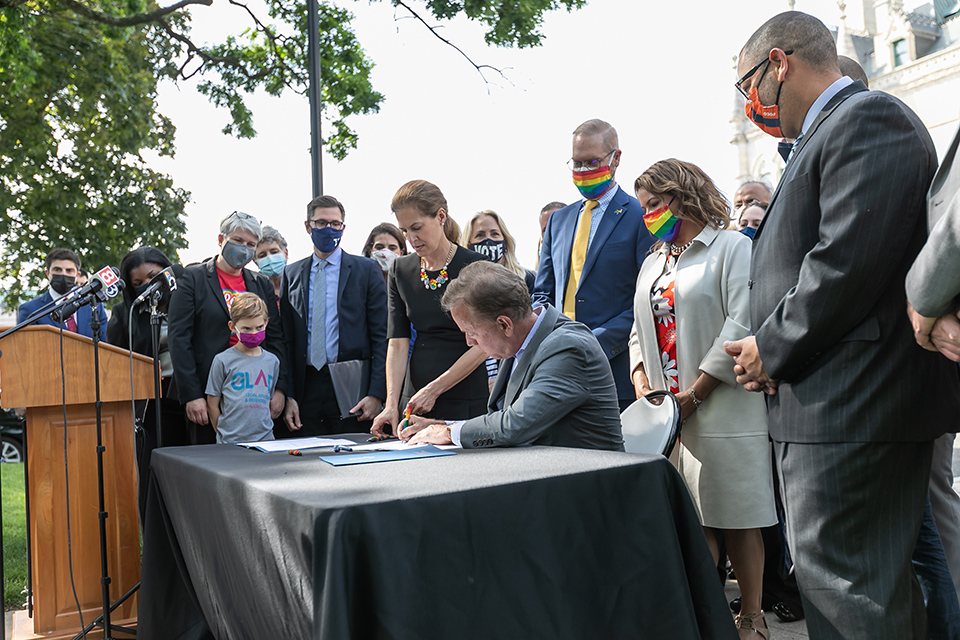 In a ceremonial signing outside the state Capitol in Hartford on June 1, 2021, advocates and state leaders celebrated successfully modernizing Connecticut’s parentage laws through the Connecticut Parentage Act (CPA).

Douglas NeJaime, the Anne Urowsky Professor of Law, founded a clinic in 2019 to advocate for the CPA. NeJaime, whose primary research and writing is on parentage, was the primary drafter of the bill.

In remarks at the ceremony, NeJaime spoke about the momentous change the signing of the CPA represents.

“As someone whose research and writing has been dedicated to parentage law, I can tell you that Connecticut now has perhaps the most comprehensive, most inclusive, and most child-centered parentage law in the country,” he said.

The CPA, which represents the most significant update to Connecticut’s parentage laws in decades, ensures that all children in the state have equal access to the security of a legal parent-child relationship. The state General Assembly passed the legislation this spring with overwhelming bipartisan support. Gov. Ned Lamont officially signed the bill into law on May 26, 2021, and a ceremonial event took place on June 1, 2021 to celebrate the passage and mark the start of Pride month.

For NeJaime’s clinic, work kicked into high gear in March 2021, when families and community members testified before the Joint Committee on Judiciary in support of the bill. NeJaime testified along with students Sara Sampoli ’21, Calleigh Higgins ’23, and Malina Simard-Halm ’23.

Over the past three years, students worked tirelessly with NeJaime to spearhead this effort. Students participated in all facets of the CPA legislation, interacting with legislators, families impacted by the law, and advocacy groups. Students also worked to publicize the bill and helped draft testimony and other legislative advocacy materials. The clinic worked on the initiative in partnership with GLBTQ Legal Advocates & Defenders (GLAD), New England’s leading LGBTQ legal organization.

The bill passed successfully out of committee on March 29. In a historic vote on April 26, the Connecticut House of Representatives passed the CPA 141-1. The Senate passed the bill unanimously on May 20.

The CPA provides simple and straightforward paths to legal recognition of the parent-child relationship that do not depend on a parent’s sexual orientation, gender, marital status, or biological connection. It secures the legal relationship between intended parents and children born through assisted reproduction and establishes protections for all involved in the surrogacy process.

“Connecticut is now a leader in the law of parental recognition,” NeJaime said. “No longer will LGBTQ parents and other nonbiological parents in Connecticut need to engage in the costly, time-consuming, and insulting process of adopting their own children.”

“We need the Connecticut Parentage Act because our family law should reflect our families as they are today,” said clinic student Will Poff-Webster ’22. “So many families, especially in the LGBTQ community, show that the most important part of parentage isn’t about blood or biology — it’s about care and personal connection.”

NeJaime agreed. “The formation of a parent-child relationship does not turn on a biological connection. State law now protects children’s relationships with the individuals who are doing the valuable work of parenting,” he said.

“I’m incredibly proud that Connecticut has been at the forefront of so many LGBTQ issues, and the legislation I signed today is another step forward in that movement to help break down bureaucratic barriers that families can face simply because of the sexual orientation or gender of the parents,” Lamont said at the signing ceremony. “Any day that we can expand equal protection for all individuals is a good day.”