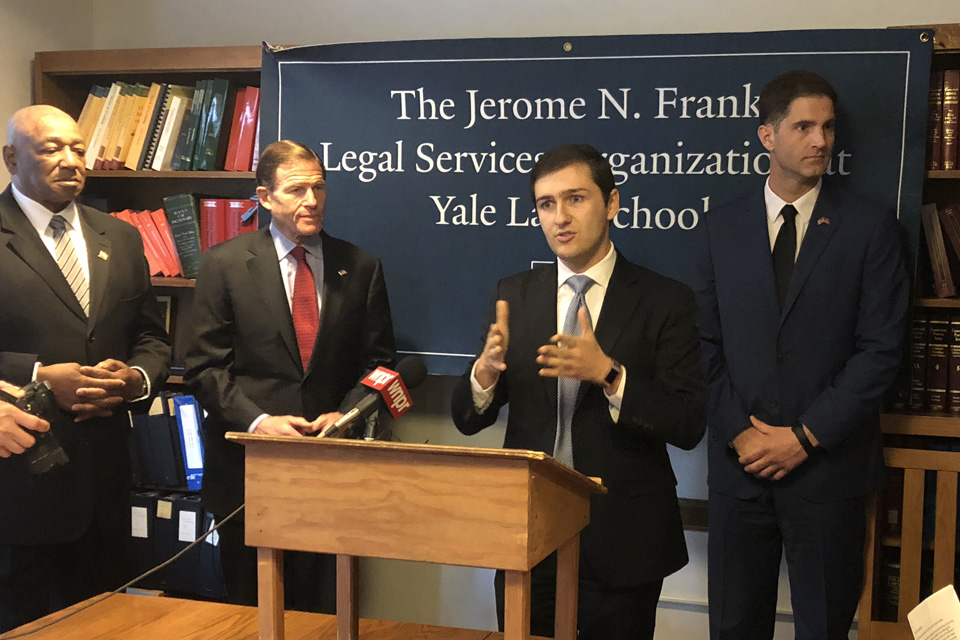 Tyson Manker, a Marine veteran of the 2003 invasion of Iraq, filed a federal class-action lawsuit on March 2, 2018, seeking relief for the thousands of Navy and Marine Corps veterans of Iraq and Afghanistan who developed post-traumatic stress disorder (PTSD) and other mental health conditions during their military service, only to be separated with a less-than-honorable discharge.

Manker is joined in the lawsuit by the National Veterans Council for Legal Redress (NVCLR), a Connecticut-based organization whose members include Marine Corps and other veterans with less-than-honorable discharges. The plaintiffs are being represented by Yale Law School Veterans Legal Services Clinic and co-counsel from Jenner & Block.

The case was first reported on by the New York Times and formally announced during a press conference with Senator Richard Blumenthal ’73 at Yale Law School on March 2.

Since September 11, 2001, more than two million Americans have served in either Iraq or Afghanistan. Nearly a third of these service members suffer from PTSD and related mental health conditions, but the military continues to issue less-than-honorable (“bad paper”) discharges at historically high rates, often for minor infractions that are attributable to undiagnosed mental health issues, according to the lawsuit. When these veterans apply for a change in their discharge characterization to the Naval Discharge Review Board (NDRB) — which handles applications from former sailors and Marines — these veterans are unlawfully denied without the benefit of Department of Defense policies meant to ease this process, the clinic said.

“The American public needs to know that hundreds of thousands of military veterans with service-connected PTSD and TBI are being denied support and VA resources because of an unfair discharge status,” said plaintiff Tyson Manker, who fought in the Iraqi invasion and is now an attorney residing in Illinois. “Systemic failures of the military departments have led to widespread legal rights violations of our most vulnerable men and women in uniform, myself included. It is a national disgrace. By taking this action with the courts we intend to restore the rule of law along with honor for thousands of patriots who were treated so poorly by the nation they served.”

In 2014, the Veterans Clinic filed a separate class-action lawsuit on behalf of five Vietnam combat veterans and three veterans’ organizations seeking relief for tens of thousands of Vietnam veterans who developed PTSD during their military service and subsequently received an other than honorable discharge. In June 2015, as a result of the lawsuit, the Pentagon agreed to upgrade each man’s “other-than-honorable” discharge status.

“We made mistakes with how we treated the Vietnam generation, before PTSD was well understood, but now we are doling out the same injustice to the veterans of Iraq and Afghanistan,” said Garry Monk, Executive Director of NVCLR. Monk’s brother, Marine veteran Conley Monk, struggled for 44 years after his Vietnam service before finally receiving a discharge upgrade as a result of the 2014 case filed by the Veterans Clinic. “Shame on us. It shouldn’t take years of waiting, an army of lawyers, and a class-action lawsuit to get the Navy to follow the law,” Monk said.

“Heroic veterans suffering from the invisible wounds of war deserve support and treatment—not the stain and stigma of a less-than-honorable discharge,” added Senator Blumenthal. “The Navy has inexplicably failed to recognize the impact of post-traumatic stress on post-9/11 veterans who have been discharged because of these invisible wounds with less than honorable discharges. This injustice must be righted immediately for an entire generation of Navy servicemen and women.”

In support of Manker, combat Veteran and U.S. Senator Tammy Duckworth said, “Not every wound suffered by those who serve this country in uniform are as obvious as mine, but all of them require care and treatment just as mine did. We owe it to our veterans to make sure they get the care they earned – but too many are denied fair access to the care they need because of an unfair discharge status based in antiquated policies that fail to recognize invisible wounds like post-traumatic stress. As a combat veteran and former VA Assistant Secretary, I know we as a nation can do much better when it comes to caring for our Wounded Warriors, and ending previous policies or punishing those suffering from post-traumatic stress is an important start.”

“The Navy is defying the Department of Defense, Congress, and the Constitution in a way that the other Boards are not,” said Peltz. “In 2017, the Army and Air Force Discharge Review Boards granted approximately 51% of discharge upgrade applications involving PTSD, while the NDRB granted a mere 16% of applications during the same period.  The disparity is staggering.”