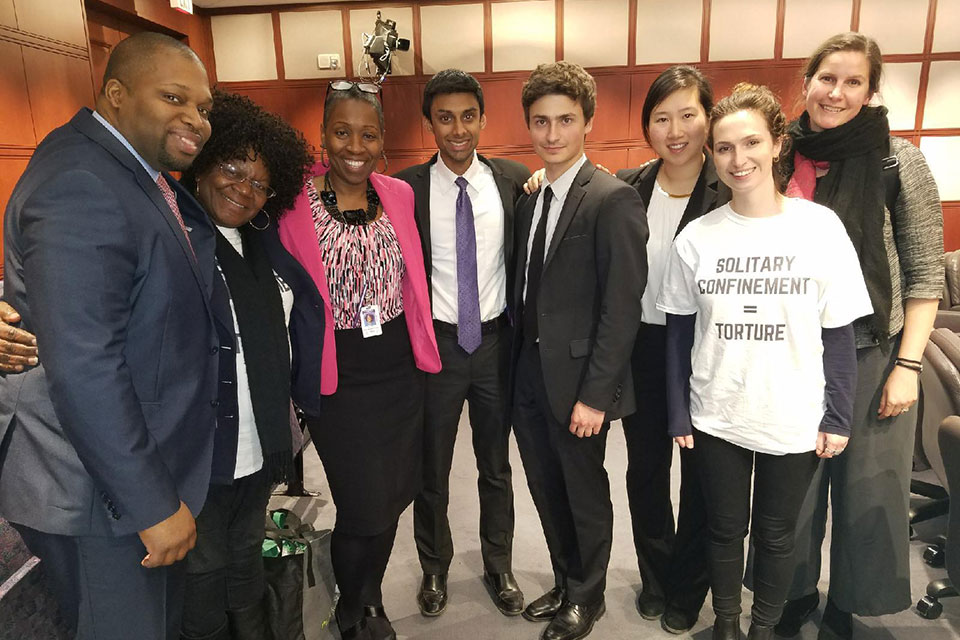 On Monday March 27, students from the Lowenstein International Human Rights Clinic and the Challenging Mass Incarceration Clinic at Yale Law School travelled to the State Capitol in Hartford, Connecticut, to testify in favor of HB 7302, “An Act Concerning Isolated Confinement and Correctional Staff Training and Wellness.” The students were part of a large coalition of community and religious groups who testified in favor of the Bill.

The Lowenstein Clinic has long been representing currently and formerly incarcerated individuals who have been subjected to isolated confinement. In 2010, the Clinic began investigating conditions at Northern Correctional Institution, a maximum security prison in Somers, Connecticut. The Clinic documented numerous cases of self-harm and found a number of inmates had been held in solitary confinement for years or even a decade.

The Clinic’s investigation sparked a number of reforms by the Department of Corrections. Sameer Jaywant ’18, who testified on behalf of the Clinic on Monday, commended the reforms, which resulted in the decrease of staff assaults, inmate assaults, and suicide attempts. Jaywant emphasized, however, that “without legislative action, there is a significant danger that administrators could return to using prolonged isolation despite the very clear threat it poses to the security and wellbeing of prison staff, inmates, and the public.”

According to Aleksandr Sverdlik ’18, who also testified on Monday, “unnecessary, prolonged isolation is harmful to prisoners, costly to taxpayers, and does nothing to make our communities safer.” The proposed Bill closely tracks administrative changes that have led to a significant reduction in isolated confinement while preserving discretion for corrections officials.