In a legal analysis of the human rights situation in Myanmar’s Rakhine State, the Allard K. Lowenstein International Human Rights Clinic at Yale Law School has found strong evidence of genocide against the Rohingya population. Persecution of the Rohingya Muslims: Is Genocide Occurring in Myanmar’s Rakhine State? – A Legal Analysis, a paper released by the Clinic today in Bangkok recommends that the United Nations Human Rights Council establish a Commission of Inquiry to conduct an urgent, comprehensive, and independent investigation of the human rights situation in Rakhine State.

The Lowenstein Clinic spent eight months analyzing whether the abuses in Rakhine State satisfy the criteria for finding genocide. The Clinic carried out its analysis at the request of Fortify Rights, a human rights organization based in Southeast Asia that investigates violations, engages with people who have the power to solve human rights problems, and strengthens grassroots responses to abuse. 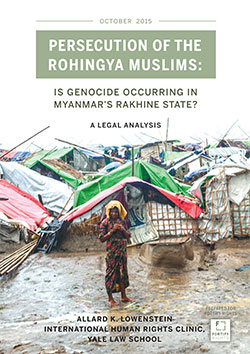 The 65-page legal analysis released today by the Lowenstein Clinic provides a summary of the circumstances Rohingya have faced in Myanmar. It then addresses the legal elements of genocide, assessing: 1) whether the Rohingya are a protected group under the terms of the Genocide Convention; 2) whether any of the acts enumerated in the Convention’s definition of genocide have been committed; and 3) whether these acts were performed with the intent to destroy the Rohingya group “in whole or in part.”

The paper acknowledged that the “intent” element is particularly difficult to establish. “Nevertheless, we found that the record of anti-Rohingya rhetoric from government officials and Buddhist leaders, the policies that specifically target Rohingya, and the mass scale of the abuses against Rohingya make it difficult to avoid inferring an intent to destroy Rohingya,” said Alina Lindblom ’17, a member of the Lowenstein Clinic team.

The Clinic team, under the supervision of Yale Law School Clinical Professor James Silk, concluded that the available evidence strongly suggests that each of the three elements of genocide have been present in the overall situation of Rohingya in Rakhine State.

Katherine Munyan ’17, another member of the Clinic team, explained that the situation in Rakhine State could be understood as ethnic cleansing. “Ethnic cleansing, or the forced removal of an ethnic group from a particular area, and genocide are not mutually exclusive concepts. Rather, ethnic cleansing becomes genocide when the efforts to remove a population aim at the group’s destruction.”

Elizabeth Marsh ’17, also a student member of the team, said, “After examining the available information and applying the genocide definition and the relevant case law established, in particular, by the Yugoslavia and Rwanda criminal tribunals, we believe that the evidence for each of the three required elements is strong enough to require an international investigation.”

The Lowenstein Clinic paper calls on the international community to establish a United Nations Commission of Inquiry to examine urgently the human rights abuses occurring in Rakhine State.

Lowenstein Clinic team member Tasnim Motala ’16 explained, “The commission would have the institutional capacity and authority to investigate and gather the information needed to determine whether genocide has indeed been committed against the Rohingya and would also be able to recommend action to provide justice for the victims and prevent further acts of genocide.”