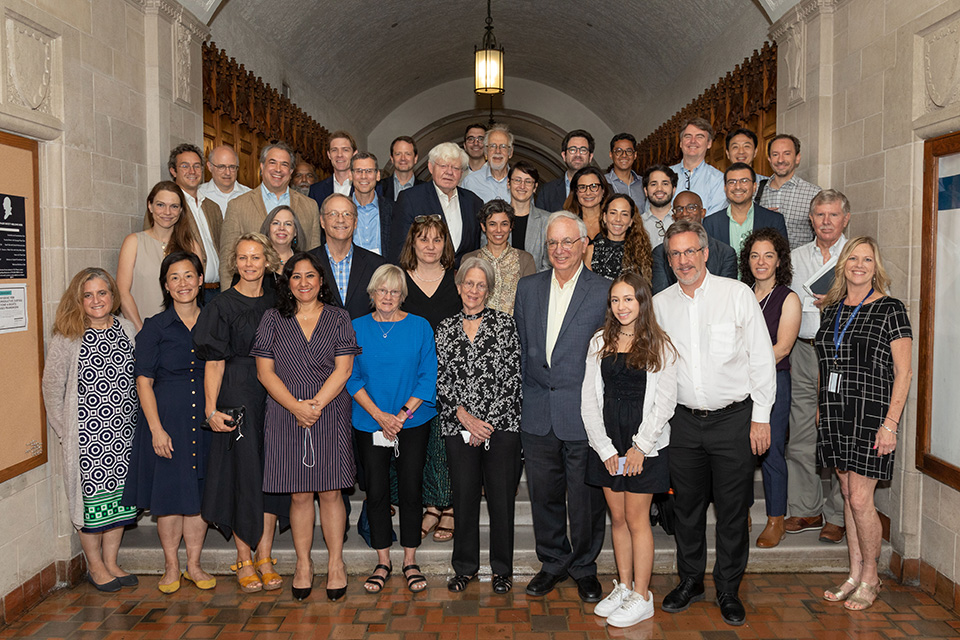 Conference participants assembled at the Law School on Aug. 26

On Aug. 26 and Aug. 27, Yale Law School hosted a conference in honor of Susan Rose-Ackerman, Henry R. Luce Professor Emeritus of Law and Political Science at Yale Law School and the Department of Political Science. The conference convened scholars from around the globe for a series of panel discussions under the banner “Public Law, Political Economy, Corruption, and Development: Susan Rose-Ackerman’s Scholarly Legacy.”

The conference began with welcome remarks from Dean Heather K. Gerken, who described Rose-Ackerman as a pioneer in law, political science, and economics.

“Her scholarship has transformed the very tools that we use to understand how polities govern themselves and how the cycle of political corruption begins and ends,” Gerken said.

Gerken also noted Rose-Ackerman’s role as a trailblazer for women in her field. “In addition to her inarguably brilliant work,” Gerken emphasized, “Susan has spent decades holding open doors for other women that she had to break down herself.”

Rose-Ackerman first came to Yale as a graduate student in the 1960s, where she was one of very few women in the economics Ph.D. program. In 1974, after a stint at the University of Pennsylvania, she became one of the first women appointed as a full-time faculty member of  the Yale Economics Department. After several years as a tenured professor of law at Columbia University, Yale enticed her back, and she took up a joint appointment in Law and Political Science, becoming the first tenured woman in the Political Science department. In 1992, she was appointed to the Henry R. Luce Chair of Philosophy of Law.

Rose-Ackerman’s scholarship is both pragmatic and uncompromising, Gerken said, and the unvarnished practicality of her approach is what has led Rose-Ackerman to search for answers across fields and disciplines from political economy, to administrative law, to environmental sciences, as well as across national borders.

The welcome continued with remarks from Sterling Professor Emeritus of Law Jerry Mashaw, who told attendees that “Susan’s legacy is the people sitting in this room.” Mashaw went on to highlight Rose Ackerman’s leadership in comparative law and her talent for bringing scholars together, describing her as an “inveterate traveler” who “will go anywhere to collaborate.”

Rose-Ackerman then welcomed the group, which included many of her former J.D. and J.S.D. students, Yale political science Ph.D.s, co-authors, and former visiting scholars at the Law School. She said she hoped that participants would get to know each other and get involved in the discussions of the papers presented.

Full conference program details are available on the conference website.

“She has spent fruitful decades of inquiry into what we can learn from one another about governmental function in the day-to-day of developing and implementing the policies that may protect the environment, serve public health and safety, suppress corruption, or redress the failures of the markets on which democracies generally depend,” he said.

“The event was a wonderful celebration of my career that asked former students, co-authors, and colleagues to talk about their current research and to reflect on how I had influenced them as a mentor and advisor over several decades,” Rose-Ackerman said. “I felt proud to see how much they had accomplished, and I found it very moving to hear their genuine and heartfelt words.”

Rose-Ackerman said that she was especially heartened by the praise of her involved and timely mentorship that, she feels, is one of her signature accomplishments; the warmth and support from the conference participants validated her efforts. In addition, some noted that, much as they valued her advice, they sometimes found her intimidating.

“I think this was because I always take my students’ ideas and research seriously,” Rose-Ackerman said. “Doing so implies a willingness to test and critically examine arguments and methods.” True to her collaborative spirit, she added, “I maintain a hope that the conversations begun at the conference will continue over time, online and in person.”