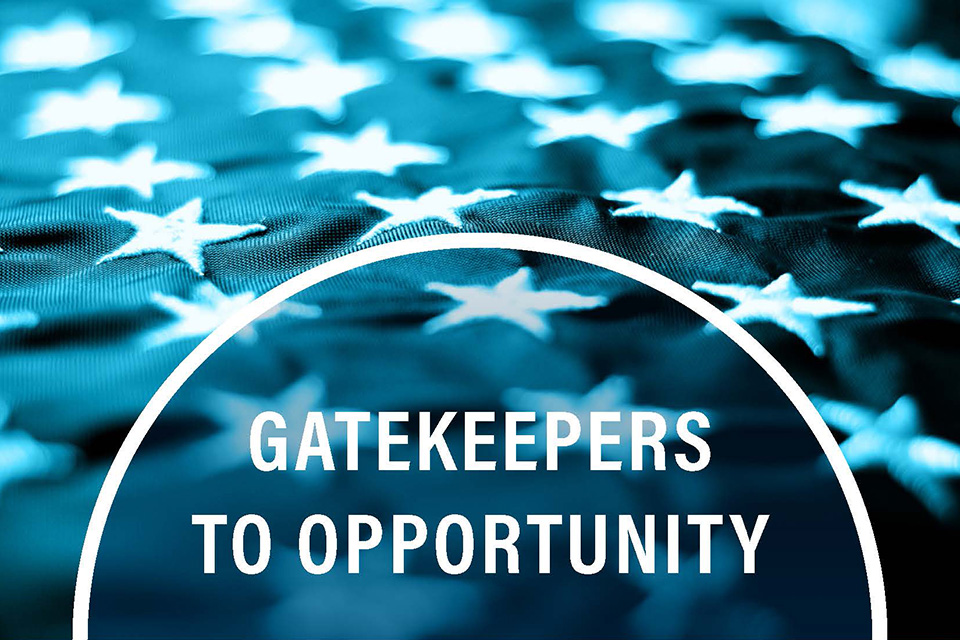 Members of the 117th Congress nominate students of different racial and ethnic backgrounds to the military service academies at dramatically different rates and, collectively, at rates that are significantly skewed as compared to the overall population of their states and districts, according to a new report released on March 17, 2021, by the Connecticut Veterans Legal Center (CVLC).

The CVLC’s report, Gatekeepers to Opportunity: Racial Disparities in Congressional Nominations to the Military Service Academies, is part of the Veterans Inclusion Project, which is CVLC’s policy initiative, and is its second Gatekeepers report. The report was produced by the CLVC in collaboration with Yale Law School’s Veterans Legal Services Clinic. 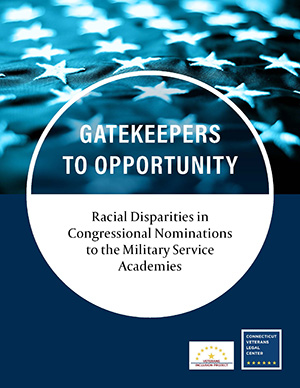 Using nearly 25 years of nomination data obtained from admissions offices at the United States Military Academy (USMA, commonly known as West Point), the United States Naval Academy (USNA), and the United States Air Force Academy (USAFA), the report reveals a drastic gap between the nominations of white students and those of students of color to the academies. Black and Hispanic students are distinctly underrepresented, receiving only 6 percent and 8 percent of sitting congressional members’ nominations, respectively. White students, on the other hand, receive an outsized 74 percent of nominations. The report ranks members of the current Congress based on their record of promoting students equitably to these prestigious, taxpayer-funded institutions. The rankings, which include each current member of Congress who has made more than 10 nominations since taking office, reveal that 49 members had not nominated a single Black student as of early 2019.

“The congressional nominations system is leaving Black and Latinx students behind,” said Liam Brennan ’07, the CVLC’s Executive Director. “Because many general officers graduate from the service academies, the congressional nominations bottleneck ultimately impacts diversity at the highest levels of military leadership. While some congressmembers are making good-faith efforts to promote students of color, the data point to a clear and urgent need for improvement across Congress and in the academy admissions process at large.”

“The data show that individual members of Congress cannot independently address racial and ethnic inequities in the academies,” said Sarah Purtill ’22, a law student intern in the Veterans Legal Services Clinic at Yale Law School. “Congress and the Department of Defense must implement broad reforms to the nominations process to create more representative student bodies.”

The CVLC’s report highlights the top five and bottom five members of the House and Senate along three measures of equitable nominating practices to the USMA, USNA, and USAFA: proportionality to district demographics, raw number of nominations of students of color, and urban/rural constituencies. The report also illuminates key trends in congressional nominations to these service academies over the past 25 years. Members of Congress have never granted more than 13 percent of their nominations to Hispanic nominees or more than 11 percent to Black nominees in any given year. Although Democrats selected more racially diverse nominees than Republicans, the racial gap cuts across party lines. Between 2009 and 2019, Democrats in Congress collectively allocated 32 percent of their nominations to students of color, compared to Republicans’ 15 percent. During the same time period, Senate Democrats allocated 20 percent of their nominations to students of color, while Republicans allocated 13 percent.

The report follows on the heels of first Gatekeepers report on gender disparities in congressional nominations to the military service academies. The first Gatekeepers report helped spur the newly enacted PANORAMA Act, a law to increase transparency in the nominations process. Sponsored by Rep. Anthony Brown and Sen. Kirsten Gillibrand, and championed by the CVLC, the PANORAMA Act requires the Department of Defense to release annual data about race, ethnicity, and gender in service academy admissions, making it easier to identify disparities like those shown in the CVLC’s reports. However, some data, including the racial balance of each individual member of Congress’s nominations, will remain unavailable under the new provision.

Brown, lead House sponsor of the PANORAMA Act, celebrated the legislation, but called for more: “This new report shows that the nominations system needs to be reexamined to ensure that every student has an opportunity to serve. The PANORAMA Act marks a crucial step toward transparency in congressional service academy nominations, but collecting new data is not enough. We are working hard to make sure that these opportunities are available to all young people regardless of their race, ethnicity, or gender.”

“Our nation’s service academies cultivate exceptional officers, but we must do more to ensure they reflect our country’s diversity,” said Gillibrand, sponsor of the bill in the Senate. “The new Gatekeepers report demonstrates that, while the PANORAMA Act made important steps to facilitate a transparent and inclusive academy nominations process, the congressional nomination system must be refocused to strengthen the diversity of our service academies. I will keep working until every student has an equal chance to serve, regardless of race, gender, or socioeconomic status.”

“Inequities in nominations lead to inequities at the service academies themselves,” added Richard Brookshire, Co-Founder and Executive Director of the Black Veterans Project. “Beyond the academy walls, these disparities are compounded: Black soldiers and sailors are overrepresented in the enlisted ranks and underrepresented among general officers, and over one half of service members of color have witnessed evidence of white supremacy or racist ideologies in the military.”

To create a more equitable nominations process for applicants of color, the CVLC’s new report provides individual congressional members with a list of best nominating practices. Finding that congressional offices currently employ a wide range of application requirements and procedures, the CVLC calls on members of Congress to consider the racial distribution of their nominations and adapt their selection practices to minimize existing barriers to underrepresented applicants. The report also offers recommendations to Congress and the Department of Defense, from enforcing the PANORAMA Act to offering new admission pathways for qualified service academy candidates.