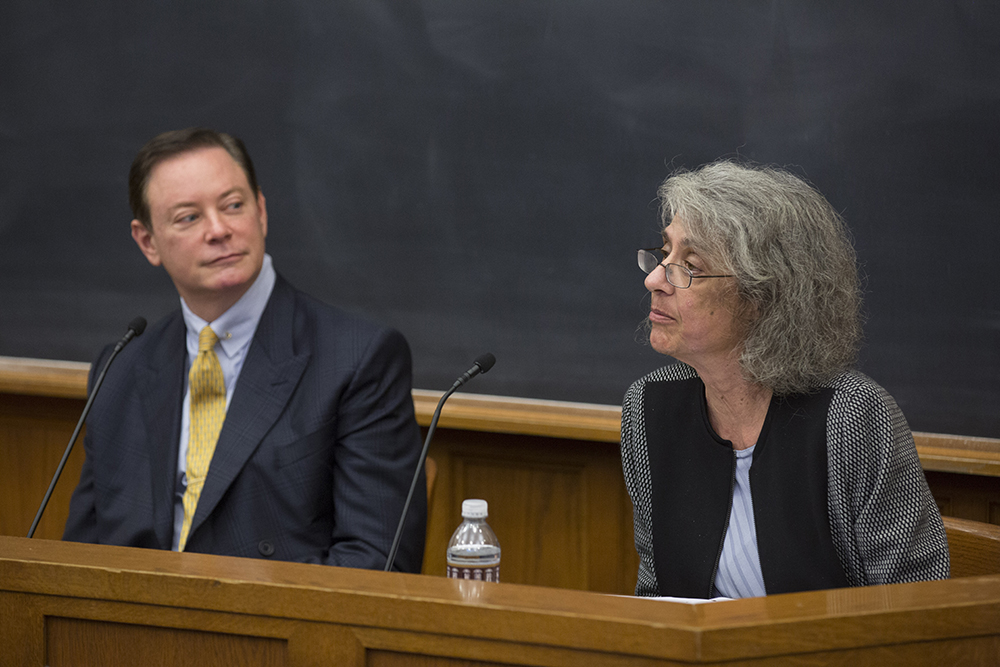 On October 23, 2017, the Solomon Center for Health Law and Policy co-hosted a Dean’s Lecture featuring authors and scholars Elyn Saks ’86 and Andrew Solomon JE ’85. The Dean’s Lecture, titled “A Conversation About Mental Health and Two Award Winning Books,” was the culmination of the Solomon Center’s spotlight on mental health and mental health law and policy. Speaking to a standing-room-only crowd, Saks and Solomon began the conversation by discussing their own experiences and sharing parts of their respective memoirs: The Center Cannot Hold: Ethical Dimensions of My Journey through Madness and The Noonday Demon: An Atlas of Depression.

The importance of relationships featured prominently in both speakers’ presentations. After a welcome and introduction by Dean Heather Gerken, Solomon spoke about his evolving relationship with depression. He discussed both how it felt to be depressed for the first time and how he came to cope with and accept his depression. Solomon also spoke about his research on mental health treatment around the world. One of his larger projects is to show that mental illness is not a “Western” or modern phenomenon but one that has been recognized by various cultures for centuries.

Saks then spoke about her experience with schizophrenia, focusing especially on her time at Oxford and Yale Law School. She movingly described how personal relationships—first with her therapists, then friends, then her now-husband—played a key role in her recovery. Saks also spoke about her first experience being restrained, which occurred at Yale New Haven Hospital. Some of her work now focuses on the use of force and personal autonomy in the mental health and health policy context.

Solomon and Saks both spoke about the policy implications of their personal experiences. In particular, they discussed the importance of access to health care and treatment. Both noted that the incidence of mental illness is crosscutting and that access to treatment was critical, regardless of socio-economic background. The conversation also turned to the difficulty of stigma—particularly in the medical and legal professions and ways to improve access to treatment for these individuals.

View a recording of the talk as well as photos of the event.

Other mental health–focused events this semester included new courses on mental health and disability and also law and the opioid crisis. Elyn Saks was a visiting scholar in residence at the Solomon Center in October. And on October 21, there was a student mentoring breakfast with Mary Giliberti ’93, CEO of National Alliance on Mental Illness.