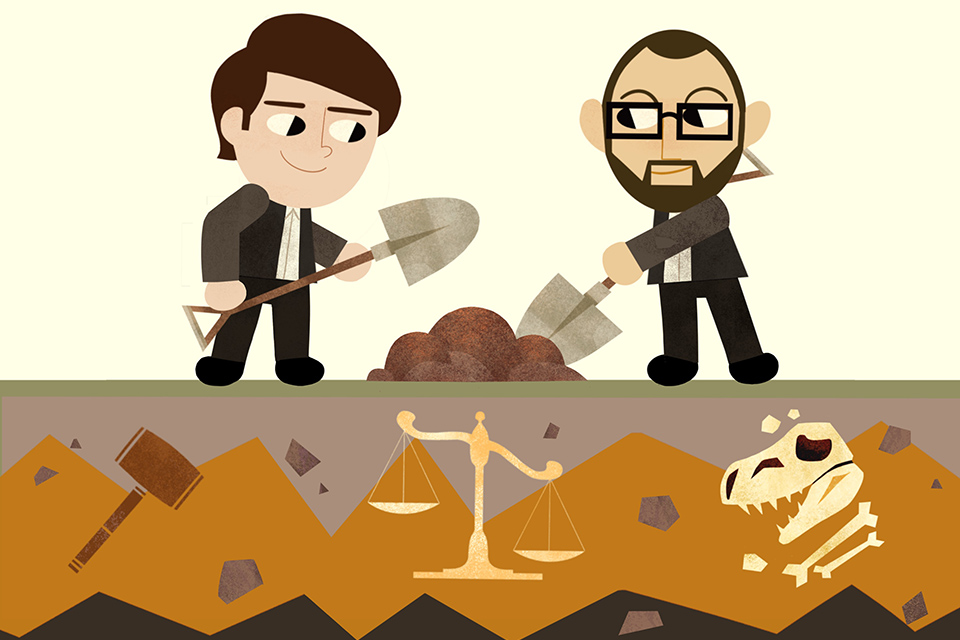 A detail from the cover art of the new “Digging a Hole: The Legal Theory Podcast” with David Schleicher and Samuel Moyn. Cover art by Carlos Jurado.

Henry R. Luce Professor of Jurisprudence Samuel Moyn and Professor of Law David Schleicher have collaborated to create Digging a Hole: The Legal Theory Podcast. On the show, Moyn and Schleicher interview legal scholars about their recent work and dig into the debates heard inside law school halls.

“There are a lot of podcasts out there by law professors. But no one had captured what we actually do most of the time — talk about and challenge each other’s work,” Schleicher said. “So we thought we would try to bring the law school workshop to the world. Also, we just seemed like the kind of people who would host a podcast in 2020.”

“It’s been a pleasure to collaborate with David and our extraordinary producer Isabel Echarte ’21, as well as Rohan Advani, Carlos Jurado, and Ankit Suri to launch our exploration of legal ideas today,” Moyn added.

On the first episode, Moyn and Schleicher speak with Jack Goldsmith, Professor of Law at Harvard University, about the book he coauthored with Bob Bauer, After Trump: Reconstructing the Presidency. Goldsmith discusses his vision for reforms that should — and possibly could — be used to reform the presidency after Donald Trump. A leading conservative in the legal academy, Goldsmith also outlines the medium- to long-term evolution of right-of-center legal arguments about the presidency.

The podcast is available on Spotify and other platforms.