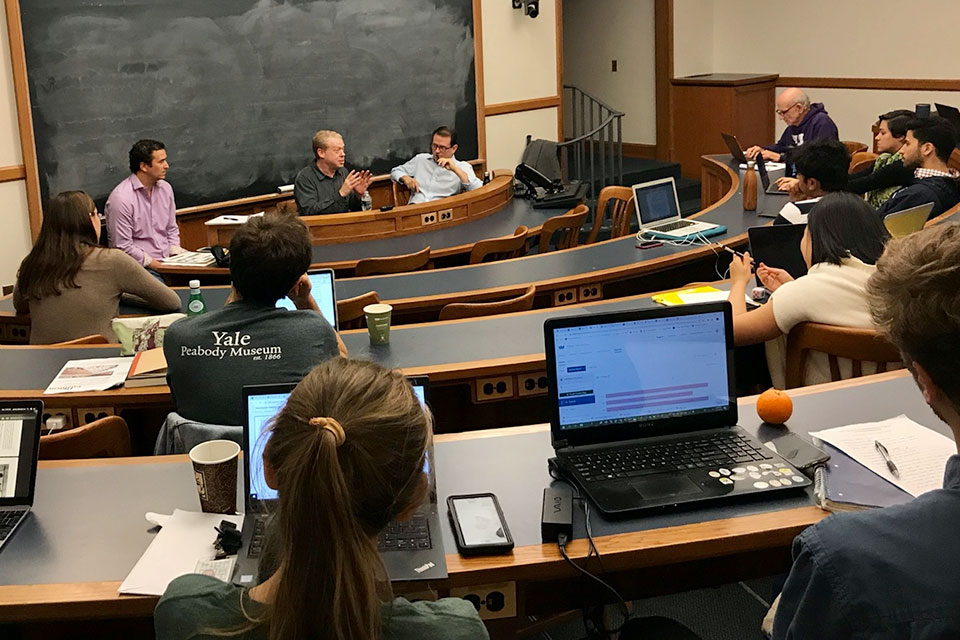 In the United States, 10 billion land animals are raised and killed for food annually. These animals are among the least-protected animals in the country. Animals raised for food have far fewer legal protections than companion animals such as cats and dogs.

Wolfson spoke with law students about the overwhelming ethical problem of farm animal mistreatment by industrial producers, the modern history of the farm animal protection movement, and strategies for how advocates can improve the lives of farm animals within the limits of the current law.

LISTEN: An episode of LEAP’s “When We Talk About Animals” podcast featuring an interview with David Wolfson is available here.

Wolfson described how he first began to learn about the legal status of farm animals in the early 1990s when he was a law student. By examining the “pocket parts” tucked in the back covers of legal reference books (which listed updates to laws that had been enacted since the books were published), Wolfson realized that dozens of U.S. states had recently amended their anticruelty statutes so that they excluded, at least in part, farm animals from their protection.

At the behest of industry, these states had written into their cruelty codes exemptions for acts that were deemed “common,” “customary,” “accepted,” or “normal” farming practices, Wolfson explained. In states with these exemptions, the animal agribusiness industry was given the power to define cruelty for itself. There are no federal laws governing how food animals are raised while on the farm (the Animal Welfare Act exempts farm animals), so Wolfson’s research revealed that many U.S. farm animals had essentially no federal or state legal protections from industrialized cruelty while on the farm.

This farm animal exemption prompted Wolfson to ask a question that would follow him throughout his career: how can one protect farm animals when the legal tools available are so limited?

Seeing little opportunity to work within the existing legal landscape, Wolfson — in collaboration with advocacy groups such as the Humane Society of the United States and Farm Sanctuary — took the fight for farm animals directly to voters via the ballot box.

Wolfson explained to students how he and his colleagues chose Florida as a bellwether state to try to pass a ballot initiative to prevent farm animal cruelty. Based on his team’s work, in 2002 with a 55 percent majority, Florida passed “Amendment 10,” a ban on pig gestation crates, which are cages commonly used by industrial pork producers to confine mother pigs. Florida’s constitution was amended so that “no person shall confine a pig during pregnancy in a cage, crate or other enclosure, or tether a pregnant pig, on a farm so that the pig is prevented from turning around freely…” Since 2002, animal protection groups have replicated this strategy and passed ballot initiatives for several animal welfare issues in states across the country, and have used the threat of bringing ballot initiatives to pressure legislatures to voluntarily adopt higher farm animal welfare standards.

Despite this success, laws to protect farm animals in the United States remain weak and insufficient, according to Wolfson. “Even though the laws needed still don’t exist, we’ve made more progress than I ever could have imagined when researching that paper in law school,” Wolfson said.

David Wolfson is a corporate lawyer and is the Executive Director of Milbank and a partner of the firm’s Corporate Group. He is a key strategist and supporter of the animal protection movement, and has taught animal law at NYU, Columbia, Harvard, Cardozo and Yale. He is the author of a number of seminal articles and chapters on animal protection law and represents pro bono many of the leading animal protection groups, including The Humane Society of the United States, Mercy for Animals, and Farm Sanctuary.

The Law, Ethics & Animals Program (LEAP) is a new initiative at Yale Law School that leads and coordinates a diverse program of activities. It seeks to contribute to defining, expanding, and advancing the field of animal law and policy. Among recent and upcoming speakers are Justin Marceau, Jonathan Lovvorn, Jennifer Jacquet and Becca Franks.